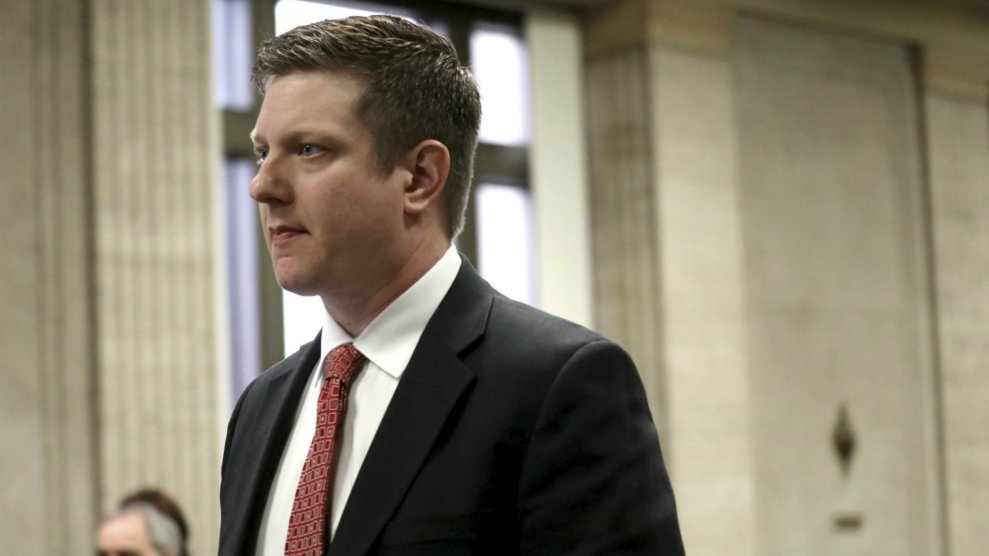 Last Thursday, prosecutors announced that Chicago police officer Jason Van Dyke is facing new criminal charges in the fatal October 2014 shooting of 17-year-old Laquan McDonald. Van Dyke was indicted by a grand jury earlier this month on 16 counts of aggravated battery with a firearm—one count, apparently, for each bullet he fired at McDonald. Van Dyke had previously been indicted on charges of first-degree murder and misconduct in office. Special prosecutor Joseph McMahon filed the new indictment—which included the original charges—to replace the first one.

All of which begs a few questions: Why would prosecutors charge Van Dyke separately for each bullet he fired? How common are these kinds of charges in shooting cases? And how likely is it that a jury will buy the argument that Van Dyke committed 16 separate felonies?

To get some answers, I reached out to Robert Milan, previously the No. 2 prosecutor in the state’s attorney’s office for Cook County, which includes Chicago. Milan has personally tried more than 100 shooting cases, he says, and “I’ve never seen charges shot by shot.”

Prosecutors, he says, may have filed the aggravated assault charges to preempt the defense’s inevitable argument that Van Dyke had the authority to use deadly force to protect himself and others, or to prevent McDonald—who was wielding a knife and had reportedly attempted to break into cars—from committing a violent felony.

Jurors would consider the battery charges in addition to (not in place of) first-degree murder. So prosecutors could ask the judge to instruct the jury to consider Van Dyke’s self-defense claim only for the bullets he fired before McDonald fell to the ground, on the grounds that the claim no longer applied after McDonald was down.

“If Van Dyke gets the total defense instruction for the entire act, I’m sure prosecutors are concerned that it covers all 16 shots,” Milan said. But “if the judge buys it, and Van Dyke doesn’t get that instruction, then that defense goes flying out the window for those shots. I really think that’s what they’re doing here.”

Which means, even if jurors find Van Dyke not guilty of murder and not guilty of the battery charges attached to the first few bullets, they could still potentially convict him on battery charges for the later bullets. The prosecutor’s strategy seems tailored to counter the special consideration a police office usually receives in shooting cases: “He’s covering his bases. Doing what a good prosecutor would do.”

“Bottom line is you have this videotape…I don’t see this case getting dismissed prior to trial.”

Van Dyke’s attorneys have tried to get the charges in the original indictment thrown out on the grounds that former Chicago prosecutor Anita Alvarez had tainted the grand jury process with “irregularities.” Alvarez—who lost a re-election bid last year in part because of voter dissatisfaction with her handling of the case—was under pressure to secure an indictment against Van Dyke. She filed the charges in November 2015, just hours before the city—under court order—released police footage of the shooting.

Van Dyke’s next court hearing is scheduled for April 20. His attorneys say they intend to file a motion to have the new charges dismissed. Milan says they may argue that Van Dyke should be charged with only one count of battery, since the 16 bullets were part of a single incident—but the judge is unlikely to oblige. “Bottom line is you have this videotape showing what took place. The burden is not high to get somebody indicted and to lay it out there,” Milan says. “I don’t see this case getting dismissed prior to trial.”

If Van Dyke were convicted of multiple battery counts, the sentences—ranging anywhere from 6 to 30 years in Illinois state prison—could be served concurrently. Milan won’t speculate on how a jury might rule, but he agrees that if the prosecutor’s strategy succeeds, it could easily spread to police shooting cases in other places.

Caution: This video of the shooting, while relevant, is graphic and disturbing.