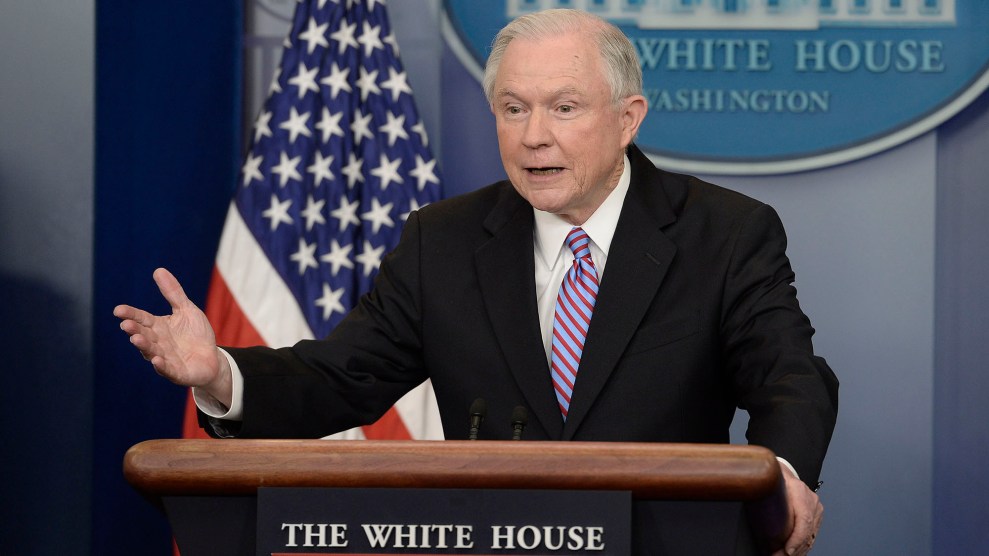 Attorney General Jeff Sessions has set his sights on a new target: sanctuary cities and counties. In a guest appearance at Monday’s White House press briefing, Sessions announced that the Justice Department will begin cracking down on state and local governments that do not help the administration identify and deport undocumented immigrants. Painting a picture of violence perpetrated by “aliens,” Sessions announced that the department will punish sanctuary jurisdictions by withholding federal grants.

“Today, I’m urging states and local jurisdictions to comply with these federal laws,” he said. “The Department of Justice will require that jurisdictions seeking or applying for Department of Justice grants certify compliance with [US Code] 1373 as a condition for receiving those awards.” Sessions’ announcement comes as several mayors have expressed an unwillingness to use local police forces to help detain and deport undocumented immigrants. According to Sessions, the Justice Department issues more than $4 billion in grants each year that would be subject to the new restrictions.

Sessions announcement is in keeping with an executive order President Donald Trump signed in January mandating the withholding of federal funds from sanctuary jurisdictions. Sessions added that the department would seek to “claw back” grants to localities that later appear to willfully violate the law. The statute Sessions referred to, 8 US Code 1373, prohibits government officials from restricting communications between a government agency and immigration enforcement about the immigration status of any individual. But the language in the statute is vague, and it’s unclear if the federal government can force local law enforcement to engage in immigration enforcement, a situation that will likely lead to court challenges to Trump’s executive order and Sessions’ new policy.

In his remarks, Sessions depicted undocumented immigrants as a violent scourge—raping, murdering, and sexually abusing children. “Countless Americans would be alive today and countless loved ones would not be grieving today if these policies of sanctuary cities were ended,” he said. That characterization is in line with the president’s critical language about immigrants, and last week, at Trump’s direction, Immigration and Customs Enforcement published its first weekly list of the crimes committed by undocumented immigrants in sanctuary cities. But the depiction is misleading, since immigrants are less likely than native-born citizens to commit crimes.

Sessions’ remarks also ignore the academic literature showing that sanctuary cities improve public safety by increasing trust and communication between immigrant communities and law enforcement. As three researchers noted in a Los Angeles Times op-ed recently, “Sanctuary jurisdictions—39 cities and 364 counties across the country have policies that limit local law enforcement’s involvement in enforcing federal immigration laws—increase public safety.” They noted a study published last year by the University of Chicago Press in which a majority of 750 police chiefs and sheriffs across the country expressed opposition to using local law enforcement to enforce immigration laws. Other studies have also found lower crime rates in sanctuary jurisdictions.

One thing that is likely to hurt public safety, however, is withholding federal grants that help fund law enforcement.