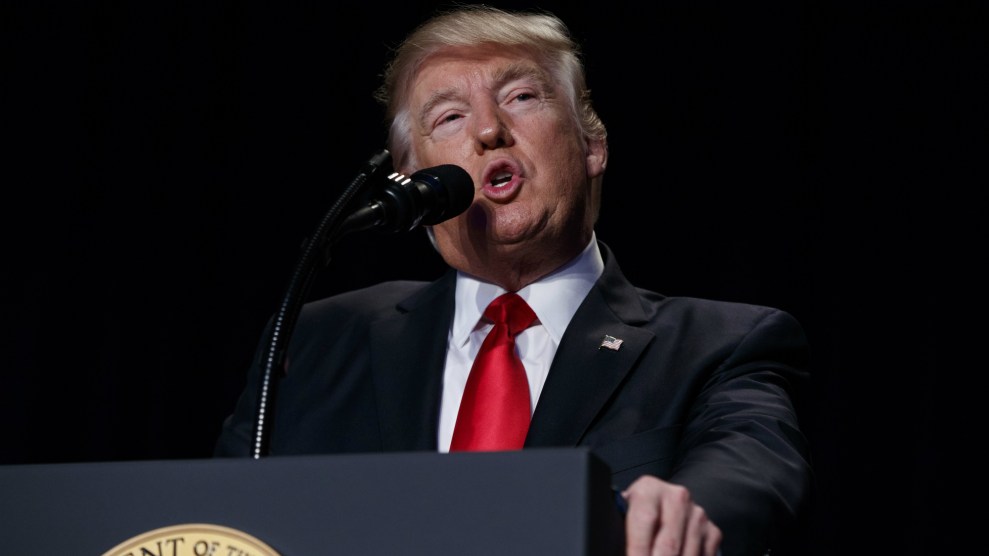 President Donald Trump is getting a lot of attention for opening his speech at Thursday’s National Prayer Breakfast with a call to prayer for Arnold Schwarzenegger, who he said has much worse ratings as host of The Apprentice than he did. But it’s something he said later in the speech that has government watchdog groups more concerned.

“I will get rid of and totally destroy the Johnson Amendment and allow our representatives of faith to speak freely and without fear of retribution,” Trump said. The Johnson Amendment prohibits tax-exempt charitable organizations, including churches, from engaging in political activity. Groups such as the Alliance Defending Freedom, a conservative legal advocacy organization based in Arizona, argue the law leads to self-censorship among religious leaders. During his campaign for president, Trump had promised to scrap it.

“It violates the constitutional rights for pastors to speak freely from the pulpit on all matters of life,” says Erik Stanley, an attorney for the Alliance Defending Freedom. “It’s been enforced in a very vague way. Nobody really knows what it prohibits and what it allows, and that’s a problem when you’re talking about a speech restriction.” The group has encouraged pastors to engage in political speech and get in trouble with the IRS so it can launch a constitutional challenge to the law.

Others, such as the left-leaning watchdog group Citizens for Responsibility and Ethics in Washington, counter that the speech of religious leaders isn’t the only thing at stake. Repealing the law, they say, would have major consequences for money in politics.

“Charitable nonprofits are kind of the next frontier, which would…significantly increase the amount of dark money out there in a way that is alarming,” says Noah Bookbinder, executive director of CREW. Getting rid of the Johnson Amendment, he says, could quickly increase the amount of undisclosed political spending for two reasons. First, those contributions would be tax-deductible, encouraging more and larger contributions. Second, it would be easy for many of these groups to start spending significant amounts of money immediately.

“You have these ready-made, very large organizations that could do a lot of political spending,” Bookbinder says. “You wouldn’t have the challenges of having to set up a new organization and raise a lot of money for it.”

Lyndon B. Johnson introduced the legislation to amend the tax code in 1954, when he was a US senator, in an effort to silence groups campaigning against him. Opponents of repealing the legislation say today’s concerns about dark money were not a problem back then.

Stanley says his group is focused on lifting the speech restrictions of religious leaders, not all the restrictions on political activity. Even so, he doesn’t oppose a full repeal of the ban.

“If Congress ultimately decides that it wants to repeal the Johnson Amendment entirely, we would support that,” Stanley says. “We trust the churches of America to do what’s right and to police themselves.”