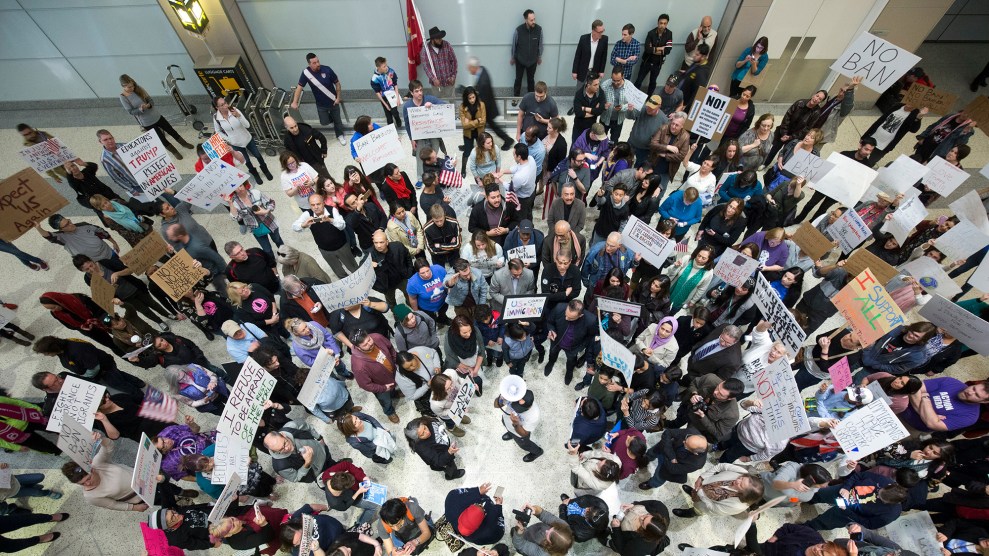 As the Trump administration rolled out its “Muslim ban,” detaining hundreds of travelers and sparking protests at airports across the country, the agency in charge of implementing the order was operating without a chief of staff. Who might get the No. 3 spot at Customs and Border Protection (CBP) remains a mystery despite reports that it will be an anti-immigration hardliner.

Last week, the Southern Poverty Law Center reported that President Donald Trump had named Julie Kirchner, the former executive director of the Federation for American Immigration Reform (FAIR), as CBP’s new chief of staff. That report was based on a tweet by an immigration policy analyst at the Cato Institute, as well as a Politico story that reported that Kirchner was serving “a temporary political appointment” at CBP.

However, CBP has not officially named Kirchner or anyone else as its new chief of staff. After issuing several cagey responses to questions about the alleged appointment, the agency’s press office confirmed that Kirchner is working as “an advisor to the commissioner’s office” and “her status hasn’t changed.” Attempts to reach Kirchner for comment were unsuccessful. Trump named his new chief of Border Patrol, Ronald Vitiello,* on Tuesday.

If Kirchner is indeed Trump’s pick, it would be another sign that he’s doubling down on his promises to crack down on immigrants. Like Trump, Kirchner has characterized immigrants and refugees as dangerous and costly. Last September, Breitbart published parts of a statement written by Kirchner, who was then working as an adviser to the Trump campaign. “Before President Obama’s failed presidency comes to an end, he is trying to force Americans to accept 30 percent more refugees—providing ISIS a path for their terrorists to enter the country,” she claimed. “In recent years, hundreds of foreign born terrorists have been apprehended in the United States alone.” She also wrote that “instead of providing free healthcare to millions of refugees, we must focus on rebuilding our inner cities and bringing jobs back to America.”

Kirchner claimed Obama’s refugee policy was “providing ISIS a path for their terrorists to enter the country.”

Kirchner joined FAIR in 2005 as its director of government relations. In 2007, she became the organization’s executive director. During her tenure, FAIR launched an initiative to end the 14th Amendment’s birthright citizenship provision, which grants citizenship to all children born on American soil, regardless of whether their parents are legal residents. In 2010, FAIR’s legal arm, the Immigration Reform Law Institute, had a hand in crafting Arizona Senate Bill 1070, which required police to detain individuals suspected of being illegal immigrants and made it a misdemeanor for immigrants not to carry their immigration papers. (The Supreme Court subsequently found most of SB 1070’s provisions unconstitutional.)

FAIR describes itself as a nonpartisan organization focused on limiting all immigration. The Southern Poverty Law Center has characterized it as a “hate group” with nativist ties. In return, FAIR has called SPLC a “basket of partisan propaganda artists masquerading as public policy advocates” and has filed a complaint with the IRS alleging that the group is engaged in illegal political activity.

FAIR and its representatives have a history of taking extreme stands and making racially charged statements. In a 1997 Wall Street Journal article, Tucker Carlson quoted FAIR’s current president, Dan Stein, as saying, “Should we be subsidizing people with low IQs to have as many children as possible, and not those with high ones?” One of FAIR’s field representatives wrote in 2005 that Mexicans were at risk of turning California into a “third world cesspool.” FAIR’s founder and former director John Tanton has warned of the “Latin onslaught” and has said the United States should remain a majority-white country, writing, “One of my prime concerns is about the decline of folks who look like you and me.” After a 2011 New York Times article exposed Tanton’s racist statements and ties to Holocaust deniers, eugenicists, and racists, he quietly dialed back his role in the organization. He remains on its advisory board.

Trump’s ties to FAIR also extend through Kellyanne Conway, his campaign manager, who conducted polling and research for the group beginning in the mid-1990s. Last December, Stein, FAIR’s president, said Conway’s work for FAIR had a visible impact on Trump’s immigration policies: “We saw that influence helping to shape Donald Trump’s positions and statements once she came on board.”

In August 2015, Kirchner left FAIR to join Trump’s campaign as an immigration adviser. During her time with the campaign, Trump made his promises to build a massive border wall and implement a ban on “Muslim immigration.” Last August, Trump visited Arizona to deliver an inflammatory speech on immigration. “We also have to be honest about the fact that not everyone who seeks to join our country will be able to successfully assimilate,” he said. “It is our right as a sovereign nation to choose immigrants that we think are the likeliest to thrive and flourish here.” Trump emphasized immigrants’ ties to violent crime and claimed that illegal immigration costs the United States $113 billion annually—a figure taken from a debunked study published by FAIR under Kirchner’s watch.