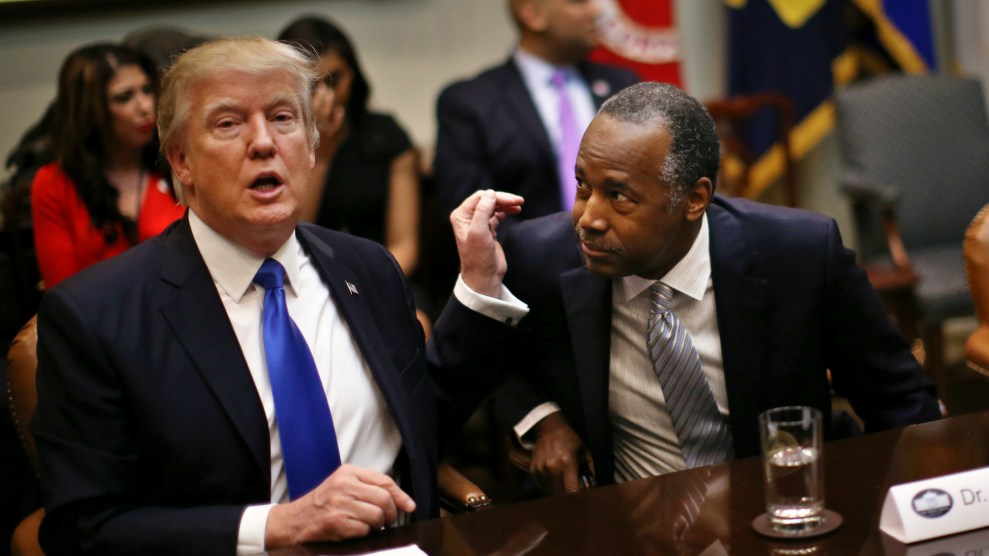 When Press Secretary Sean Spicer announced that the White House would host a series of events celebrating Black History Month, many African Americans were skeptical that it would be a genuine effort. President Donald Trump, who was once sued by the Justice Department for discriminating against black tenants, launched his foray into politics by questioning the citizenship of the nation’s first black president. His black outreach efforts during the campaign often veered into offensive territory, with frequent references to “inner cities” as crime-ridden hellscapes, and only 8 percent of black voters cast ballots for him. He appointed Steve Bannon, who led a right-wing website with white nationalist ties, as chief strategist and Jeff Sessions, who has faced allegations of racism for decades, as attorney general.

Those concerns were quickly borne out. From the first day of Black History Month, Trump repeatedly bungled attempts to commemorate the country’s African American leaders and community. Here’s a recap of the Trump administration’s first Black History Month:

Well, the election, it came out really well. Next time we’ll triple the number [of black votes] or quadruple it. We want to get it over 51, right? At least 51.

It didn’t get better from there. Trump paused briefly to reflect on the legacy of Martin Luther King Jr. but then used the civil rights icon to get in a few jabs at the “fake news” reporters who mistakenly said that Trump removed a bust of King from the Oval Office shortly after the presidential inauguration. “So I think it was a disgrace, but that’s the way the press is,” Trump said. “Very unfortunate.”

Then Trump referred to 19th-century black abolitionist Frederick Douglass in the present tense, leaving many to wonder if Trump actually knew who Douglass was. “Frederick Douglass is an example of somebody who’s done an amazing job and is getting recognized more and more, I notice,” the president said.

Spicer struggled to clarify Trump’s comments later that afternoon. “I think there’s contributions—I think he wants to highlight the contributions that he has made,” Spicer said. “And I think through a lot of the actions and statements that [Trump’s] going to make, I think the contributions of Frederick Douglass will become more and more.”

2/1: Senate committee approves Sessions
Trump’s pick for attorney general took a big step toward confirmation when the Senate Judiciary Committee voted along party lines to move the Alabama Republican’s nomination to the Senate floor. The move drew condemnation from civil rights groups with deep concerns about putting the agency in charge of enforcing civil rights laws in the hands of a man with a troubled racial history.

Black lawmakers were also not happy that Sessions—whose 1986 bid for a federal judgeship was derailed by allegations that he had made racially insensitive comments to an African American deputy—was on the path to confirmation as attorney general.

As #BlackHistoryMonth begins, we remember when Pres. Lincoln submitted the 13th Amendment, ending slavery, to the states #NationalFreedomDay

Pence’s recognition of a white man to commemorate Black History Month did not go over well, sparking the #PenceBlackHistory hashtag on Twitter.

2/8: Spicer says Coretta Scott King would have changed her mind about Sessions
Senate Republicans blocked Sen. Elizabeth Warren (D-Mass.) from reading a 1986 letter written by Coretta Scott King, Martin Luther King Jr.’s widow, opposing Sessions’ nomination for a federal judgeship. In the letter, King noted that while serving as a US attorney in Alabama, Sessions had “used the awesome powers of his office in a shabby attempt to intimidate and frighten elderly black voters.”

The next day, Spicer said he “respectfully disagreed” with King’s assessment. “I can only hope that if she was still with us today, that after getting to know him and to see his record and his commitment to voting civil rights, that she would share the same view that Sen. [Arlen] Specter did where he said, ‘Although I voted against him, getting to know the man that is now, I regret that vote,'” Spicer said.

Sessions was officially confirmed as attorney general later that day.

Education must not simply teach work – it must teach life. – W.E.B. DeBois pic.twitter.com/Re4cWkPSFA

After heavy criticism, the Education Department corrected the tweet and issued an apology. Unfortunately, it misspelled part of its apology tweet, too.

2/16: Trump asks a black reporter to set up a meeting with the Congressional Black Caucus
During a Trump press conference described as “surreal” and “an exhausting 77-minute extravaganza,” American Urban Radio Networks Washington bureau chief April Ryan asked the president if he would take a meeting with the Congressional Black Caucus to discuss his plan for inner cities. After first expressing confusion over Ryan’s use of the CBC acronym, Trump—who had called himself “the least racist person” earlier in the press conference—went on the offensive.

The Congressional Black Caucus then pointed out that it had been asking for a meeting since January:

Hi, @realDonaldTrump. We’re the CBC. We sent you a letter on January 19, but you never wrote us back. Sad! Letter: https://t.co/58KiuHmITF

The White House is reportedly working to get something scheduled.

2/21: Trump visits the National Museum of African American History and Culture
Trump was “visibly moved” by the Smithsonian’s newest museum. At one point, while looking at a slave auction block, Trump reportedly paused to say, “Boy, that is just not good.”

After the tour, Trump said his museum visit was “a meaningful reminder of why we have to fight bigotry, intolerance, and hatred in all of its very ugly forms”—nearly a month after signing an executive order temporarily barring refugees and residents of seven majority-Muslim countries from entering the country.

2/23: Trump addresses those urban hellscapes
Trump frequently points to the uptick in violence in Chicago as evidence of the rising violence in the “inner cities” that he regularly (and misleadingly) spoke of on the campaign trail. Trump has called the violence “very easily fixable,” saying that the part of the fault lies with local officials who are “overly politically correct.” After seven people in Chicago were fatally shot in a single day, Trump tweeted:

Seven people shot and killed yesterday in Chicago. What is going on there – totally out of control. Chicago needs help!

He repeated those sentiments in a speech the next day at the Conservative Political Action Conference, adding, “We will support the incredible men and women of law enforcement.” The remarks did not sit well with Chicago Police Superintendent Eddie Johnson, who said that city officials have asked for federal help and gotten no response. “We’ve made requests to the White House and the Justice Department for them to support our work,” Johnson said in a statement. He added that Mayor Rahm Emanuel had made an in-person request of the administration earlier this month. “We are hopeful the administration will finally respond,” Johnson said.

2/25: Trump promises to support the black community—but stays light on the details
Trump often refers to his “New Deal for Black America” proposal that he introduced during the campaign. In his last weekly address of the month, the president turned to that proposal again, promising to help African Americans. “I want every African American child, family, and worker to have access to great schools, safe communities, and good-paying jobs,” he said.

But Trump has provided few details on how he’ll help black Americans. When discussing historically black colleges and universities during the address, Trump promised to “promote” their accomplishments more, saying that “they are not given the credit that they deserve, and they are going to start getting that credit.” For weeks, Trump has promised a new executive order supporting historically black colleges and universities, but the administration has yet to release it or explain how it will differ from the support offered by prior administrations.

There’s still a chance for Trump. Some black college and university presidents say they are willing to work with the administration on initiatives such as increasing student grant accessibility. On Monday, the president briefly met with HBCU leaders in the Oval Office. His executive order could arrive as early as Tuesday. If Trump issues something substantive, his Black History Month may end better than it started.

2/27: Betsy DeVos honors HBCUs for pioneering school choice, misunderstands why they were created
So much for that. Hours after the meeting with HBCU leaders ended, Education Secretary Betsy DeVos said in a statement that “HBCUs are real pioneers when it comes to school choice” and that “their success has shown that more options help students flourish.”

The Trump administration has strongly supported expanding school choice—meaning alternatives to traditional public schools—saying that the programs will help black students. But framing black colleges as part of the school choice movement misses a key point: Historically black colleges and universities flourished because segregation had barred most black students from attending white institutions. As the Education Department’s own website explains, during the segregation era, HBCUs were “the principle means for providing postsecondary education to black Americans.”

2/28: Sessions promises to protect civil rights, but moves policy in the opposite direction

During a brief address at a Black History Month film screening hosted by the Justice Department, Sessions promised that the agency will continue to protect civil rights. “We will work to safeguard justice through law for all of our citizens,” he said. “…This is a key part of our mission.” But the previous evening, the Justice Department had reversed its position on a key voter ID case in Texas. Under President Barack Obama, the department had argued that the state’s voter ID law—one of the toughest in the nation—intentionally discriminated against minorities. But Sessions, who believes there is widespread voter fraud despite minimal evidence of it, evidently disagrees. His deputy asked a federal court to dismiss the Justice Department’s earlier arguments against the law.