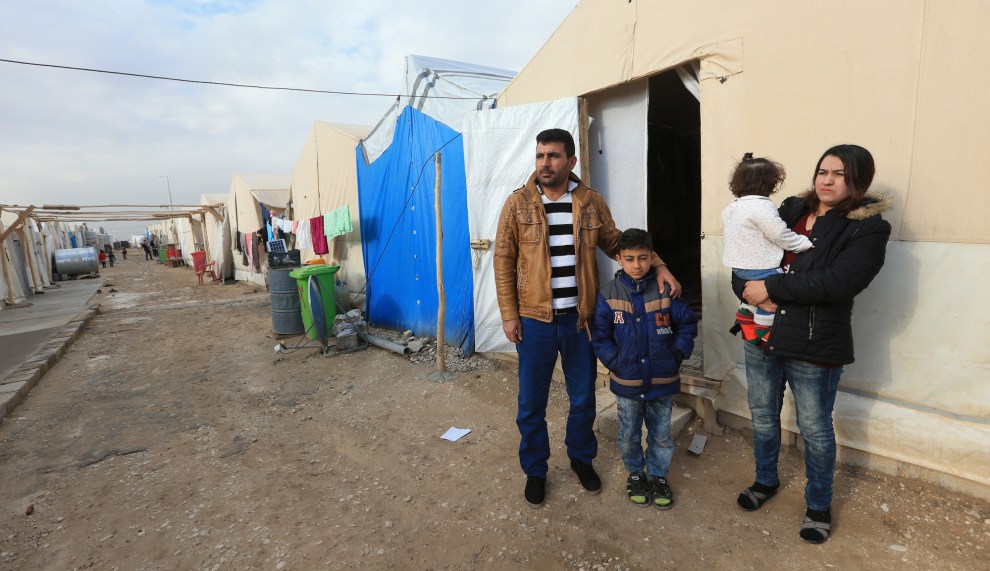 Khudeeda Rashowka Naif and his family, from Iraq, were preparing to leave their refugee camp for the airport when Trump’s executive order came down.Ari Jalal/Zuma

For thousands of US-bound refugees worldwide, President Donald Trump’s so-called “Muslim ban” has thrown their future into question. Now that refugees are not allowed to come to the United States for 120 days—and Syrian refugees are barred indefinitely—resettlement workers are scrambling to figure out what will happen to these people fleeing war, persecution, and disaster in their home countries.

Trump’s executive order affects both refugees in the middle of the screening process and those already approved for resettlement in the United States, according to Sarah Krause, senior director of immigration and refugee programs for Church World Service, which operates one of the nine global resettlement support centers for US-bound refugees. “For someone to get referral to the US refugee admissions program is a feat,” says Krause, whose organization helped with the resettlement of about 28,000 people from sub-Saharan Africa to the United States last year. “For them to have made it through the process and been approved is even more incredible. That they have gone through all of that and we are now shutting the door on them is unconscionable.”

In addition to its temporary freeze on resettlement, the order caps total incoming refugees for the 2017 fiscal year at 50,000 people—less than half of what the Obama administration had planned. More than 32,000 have already been resettled. For the 872 refugees already set to travel to the United States this week—including those from Iraq, Iran, Libya, Somalia, Sudan, Syria, or Yemen—the government has granted a temporary grace period. Those refugees will be allowed to enter the country until Friday. For those scheduled to enter the United States after Friday, their flights have been canceled.

Here’s what Krause sees as the most pressing issues facing the refugees left behind by Trump’s order:

People have been left without housing or their possessions. “These are individuals who, in many cases, have already sold their belongings in order to have some money upon entering to the United States,” Krause says. “Many of them knew their final destination—the cities to which they would be resettled. In Kenya, refugees coming from the Dadaab and Kakuma refugee camps are brought into Nairobi prior to their departure for the United States. There they stay at the [International Organization for Migration transit] center, where they receive predeparture medical screenings as well as cultural orientation, where they learn about life in the United States. Currently, there are over 120 refugees in the IOM transfer center who were expecting to board flights this week and who are now being told they will be sent back to the camp. For those refugees, they have already given up their shelters to new refugee arrivals, and sold their belongings. Their future is very uncertain.”

Refugees already approved for US entry may need to restart parts of the resettlement process—a delay of months or years. “Their cases remain in processing,” she says. “Some of their clearances will expire during this 120-day period and will need to be re-requested. There are checks that are requested by the resettlement support centers: [security opinions], interagency checks, as well as fingerprints. It is a challenge to line all those clearances up, which means the window for departure is very small. Once that window closes, it’s difficult to open again.”

Refugees from the seven banned countries were left stranded. “For those that had already been booked for travel, their flights have been canceled,” Krause says. “Processing has essentially halted. [They] are not in their home country, they’re in countries of asylum, and the conditions in those countries are often very difficult. Some refugees make it to urban centers but live on very little and are not permitted by the countries in which they’re residing to work. Others are living in camps with hundreds of thousands of other people. Our Somali refugees—most of them have been in exile since 1990. You have generations of Somalis that have never been to Somalia.”

Officials are trying to prioritize refugees in particularly dangerous circumstances. The executive order allows for some refugees to be admitted on a case-by-case basis, Krause says. “We’re working with the Department of State to compile a list of the most vulnerable cases, although at this point the process for seeking exemptions is not yet clear. This is a life-saving program, and a delay of even a day for some cases could mean death in a case of extreme medical need or protection issues. There are some who are being moved from safe house to safe house by UNHCR because they are being hunted by their persecutors. I know of a gay Somali man who is currently in a safe house and who has been attacked. He is one of those cases in our pipeline.”

But for others, there’s little hope of finding another home now that the United States has shut its doors. “For those for whom we don’t believe exemptions can be sought, or it may take too long, we will look at pulling those cases out and giving them back to UNHCR for referral to another resettlement country. While the US accepts less than 1 percent of the world’s refugee population, we take more than any other. So it is unlikely that any other countries will have the capacity to take those that we cannot. And other countries have their own processes. That will take time.”

This story has been updated with more recent resettlement numbers and to accurately reflect the refugees affected by the grace period.