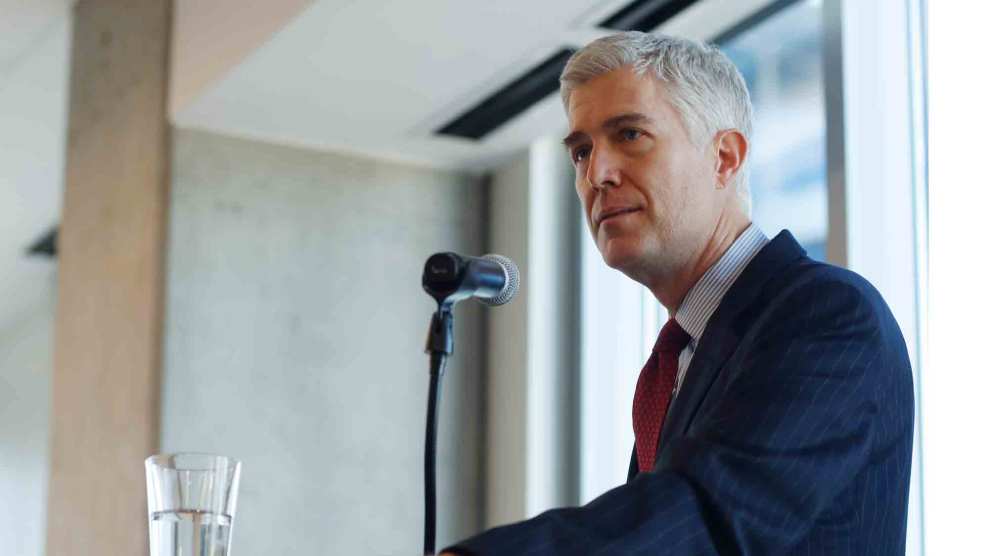 The silver fox wins. Supreme Court watchers had been speculating for days that President Donald Trump would nominate a justice who most looks like he could play one on TV. Of all the conservative candidates on Trump’s short list, 10th Circuit Court of Appeals Judge Neil Gorsuch most fit that bill.

The administration rolled out the president’s Supreme Court pick Tuesday evening with dramatic flair more appropriate for a reality TV series. Trump summoned his two top picks, Gorsuch and Thomas Hardiman, who serves alongside Trump’s sister on the 3rd Circuit of Appeals, to heighten the suspense. And he unveiled his selection during a prime-time Oval Office address.

“The qualifications of Judge Gorsuch are beyond dispute,” he declared in making the announcement, noting that Gorsuch had been confirmed unanimously to his current seat. “That’s unanimous—can you believe that? Nowadays with what’s going on? Does that happen anymore?”

After Justice Antonin Scalia died in February 2016, Senate Republicans refused to allow President Barack Obama to fill his seat on the high court—Obama’s nominee, Judge Merrick Garland, didn’t even receive a hearing. That gamble appears to have paid off. Gorsuch is seen by many on the right as a fitting heir to Scalia. Appointed to the 10th Circuit by President George W. Bush in 2006, Gorsuch—like Scalia—is a so-called “textualist,” meaning he looks only to the words on the page, and not to legislative history when looking at the law. He’s expected to hew to Scalia’s approach of interpreting the law through the lens of the Founders’ original intent. Unlike Hardiman, whose blue-collar background and years driving a taxi gave him a compelling and unusual personal story for a potential Supreme Court justice, Gorsuch has an Ivy League background. He was in Obama’s class at Harvard Law School, studied philosophy at Oxford, and served in the Bush Justice Department. (In his announcement, Trump noted that “education is very, very important to me.”)

Now Gorsuch could serve alongside Justice Anthony Kennedy, for whom he once clerked. But Gorsuch’s views on the law—and especially the power of the regulatory state—may have been shaped as much by his mother, Anne Gorsuch Burford, who was the first woman to head the Environmental Protection Agency. During her brief tenure as President Ronald Reagan’s EPA administrator, Burford waged war on environmental regulations, including trying to roll back limits on lead in gasoline. She became the first agency head in American history to be held in contempt of Congress for withholding documents from the House, which was investigating mismanagement of a Superfund cleanup project. Burford had previously served in the Colorado House of Representatives, where she was a member of the “House Crazies,” a group of legislators who might have been considered the Tea Party Caucus of their day.

As a federal appellate judge, Neil Gorsuch won conservative fans with his rulings in cases involving Hobby Lobby and the Little Sisters of the Poor, in which he rejected the Obama administration’s attempt to force both entities to provide contraception coverage in their health insurance plans. He also recently dissented in a decision by his court to deny the rehearing of an appeal from the state of Utah, which had tried to defund Planned Parenthood but was blocked by the appellate court.

Despite Gorsuch’s extremely conservative record on the bench, anti-abortion purists had been lobbying against his nomination because they considered him insufficiently pro-life. But other abortion foes, such as Ethics and Public Policy Center President Ed Whelan, have countered that Gorsuch is clearly on record as pro-life. He wrote a book on assisted suicide, and in that book he made clear that he didn’t see a constitutional rationale for placing the value of a mother’s life over that of her unborn child—a clear enough signal about his views on Roe v. Wade, the controversial Supreme Court decision that legalized abortion.

With Gorsuch’s nomination, Trump seems to have fulfilled one of his primary campaign promises of appointing a pro-life justice to fill Scalia’s seat. As he said before announcing his pick, “Millions of voters said this was the single most important issue to them when they voted for president for me. I am a man of my word.”

Whether Gorsuch will live up to Trump’s promise to overturn Roe v. Wade “automatically” remains to be seen. In 2005, Gorsuch wrote an essay for National Review decrying the increasing politicization of the judiciary, which, he wrote, “undermines the only real asset it has—its independence.” Gorsuch added, “Judges come to be seen as politicians and their confirmations become just another avenue of political warfare.” Gorsuch may prove to have an independent streak to match the justice he’ll be replacing (or simply a fondness for opining in conservative news outlets like his future colleague Samuel Alito). Regardless, at 49, he will be the youngest justice on the court since the first President Bush nominated Clarence Thomas, who was 42 at the time. Actuarial tables suggest Gorsuch will have many, many years on the court to make good on Trump’s pledge.