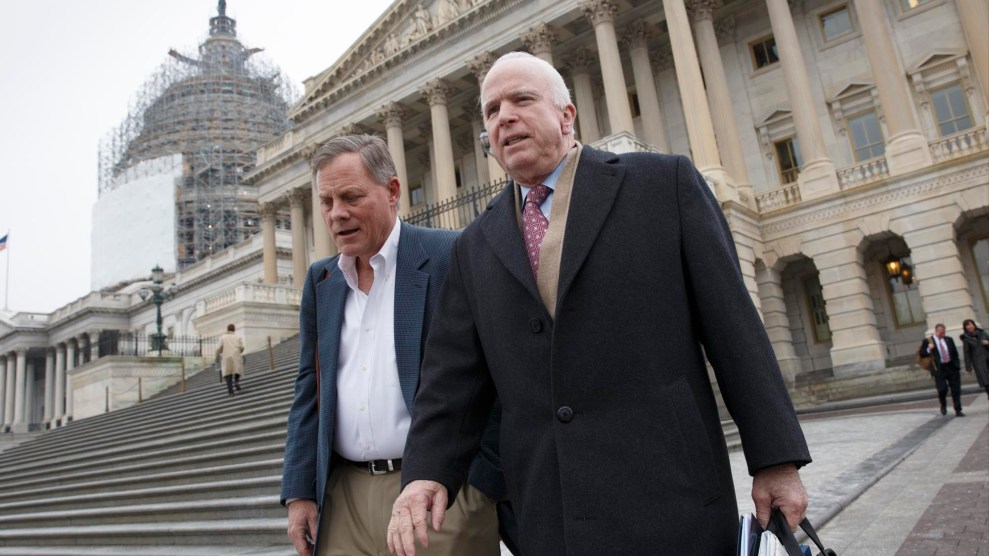 Last week, news broke that the Senate intelligence committee—as part of its recently launched investigation of both the Russian hacking of the 2016 campaign and contacts between Donald Trump associates and Russia—had sent letters to at least a dozen agencies, individuals, and organizations instructing them to preserve records and information related to the probe. This was one of the first public signs that the Senate committee or the House intelligence committee, which has initiated its own inquiry, had begun any real digging.

But both investigations are proceeding behind a thick veil of secrecy, and there is no way to tell if the Republicans leading these efforts are mounting serious endeavors committed to unearthing facts that might be inconvenient, embarrassing, delegitimizing, or worse for Trump and his White House. So the question remains: Can these committees be trusted to get the job done?

Congressional spokespeople wouldn’t say if either committee has yet issued any subpoenas. Or if they will release public updates. This is a red flag.

Congressional investigations are not easy tasks. Committees usually are burdened with a wide variety of responsibilities. In the case of the intelligence committees, they are already responsible for monitoring the full intelligence community, which includes 17 different agencies. Veteran members and staffers from these committees routinely say that it’s tough for them to manage the normal oversight. (Watching over just the gigantic National Security Agency could keep a committee busy around the clock.)

Now, these committees have to maintain their current overwhelming duties and also conduct a highly sensitive inquiry. One congressional source says that the House intelligence committee has slightly expanded its staff for the hacking/Trump-Russia investigation. But Jack Langer, the spokesman for Rep. Devin Nunes (R-Calif.), the chairman of the committee, won’t confirm that. And spokespeople for Sen. Richard Burr (R-N.C.), the chairman of the Senate intelligence committee, did not even respond to a request for comment on the staffing issue.

Langer and the Burr spokespeople also wouldn’t say if the House and Senate intelligence committees are coordinating their efforts. Or if either committee has yet issued any subpoenas. Or if the committees will release public updates on the progress of each investigation. This is a red flag. Questions such as these do not involve classified or secret information. The committees could demonstrate their commitment to full accountability by informing the public about these organizational issues. The desire to shield such details does not bode well.

News reports about the Trump-Russia scandal indicate that US intelligence agencies have material—perhaps surveillance intercepts or reports from human assets—relating to contacts between Trump associates and Russians. The FBI reportedly has been investigating these contacts and presumably has collected information relevant to the committees’ inquiries. Yet often intelligence agencies, looking to protect sources and methods or an ongoing investigation, are reluctant to share such information—even with the committees. (Democratic senators and representatives have repeatedly called on the FBI to release to the public information it has on Trump-Russia interactions.)

Much depends on the chairmen of the two committees. How hard will they push if they encounter a roadblock at the FBI or elsewhere? And how far will they go? Will they devote sufficient resources? Will they issue subpoenas for witnesses not eager to accept a committee invitation? A chairman has much discretion in determining the course of an investigation. Imagine that a staffer has located a witness who might possess significant information but that this witness is now living in South Korea. Will the chairman send staff there to locate the witness and obtain a statement? Or might he say, We have to let this one go?

“The real enemy to an investigation is the time that goes by.”

The most crucial element is how committed the chairman is to uncovering the truth. “The real enemy to an investigation is the time that goes by,” says Bash, who helped oversee an investigation of the NSA’s warrantless wiretapping during his time with the house committee. “People lose interest. Other events intervene. The key thing is to get going fast. There are a hundred ways to slow down an investigation by people or agencies who don’t want it.”

Neither Burr nor Nunes has demonstrated much public enthusiasm for investigating the Trump-Russia scandal. At first, Burr wanted his committee to focus solely on the Russia hacking, not ties between Trump associates and Russia. This was no surprise. Most congressional Republicans have either shied away from or downplayed this subject. And Burr did serve on the Trump campaign’s national security advisory council. But after Sens. John McCain (R-Ariz.) and Lindsey Graham (R-S.C.) pushed for a select committee investigation—which would be a more independent inquiry involving a greater number of senators—Burr agreed to widen the intelligence committee probe to cover the Trump-Russia angle. It was obvious that he did so in order not to lose control of the investigation.

Nunes, who was an adviser to Trump’s transition team, initially showed little eagerness for this assignment, as well His announcement in late January that he would proceed with the investigation came only after Burr’s change of heart—and followed weeks of public pressure from Rep. Adam Schiff, (D-Calif.), the ranking Democrat on the House intelligence committee. Skepticism regarding the willingness of Burr or Nunes to lead robust, wherever-it-goes investigations is hardly unfounded.

On Friday, the Washington Post reported—and the White House confirmed—that Burr and Nunes had been enlisted by the Trump administration to be part of its effort to counter news stories about Trump associates’ ties to Russia. Their participation in this spin campaign has undermined their claims of independence. And on Saturday—in response to Rep. Darrell Issa’s (R-Calif.) surprising call for a special prosecutor to investigate the Trump-Russia connections—Nunes dismissed Issa’s demand, saying, “This is almost like McCarthyism revisited. We’re going to go on a witch hunt against, against innocent Americans?” He added, “At this point, there’s nothing there.” That’s not the manner in which the head of an independent investigation should be talking about the inquiry. How does Nunes know who’s innocent or not—or whether there’s nothing there—at this point?

In recent weeks, Democratic members of both committees told me that, at least for the time being, they were hoping for the best and taking Burr and Nunes at their word when they claim they are committed to conducting thorough investigations, holding public hearings, and releasing public findings. These recent actions of Burr and Nunes may change that perspective. Schiff has said he will release public updates on the progress of the House committee’s inquiry, though he has not issued one yet.

Democrats are calling for an independent bipartisan commission—similar to the well-regarded 9/11 commission—to investigate this affair.

For weeks, Democrats on both sides of Capitol Hill have called for an independent bipartisan commission—similar to the well-regarded 9/11 commission—to investigate this affair. This inquiry would operate outside of the congressional committee system—meaning outside of GOP control. Naturally, the Republican congressional leadership has opposed the move and has declared that it’s just fine to let the intelligence committees do their work. And McCain and Graham have yet to endorse the Democrats’ proposal. But that is a card McCain could play if the Senate investigation does not meet his standards. Still, every time there is a development in the Trump-Russia story—such as last week when it was reported that the Trump White House asked the FBI to knock down the news stories saying that Trump associates had interacted with Russian intelligence—Democrats renew their call for an independent commission that would be distant from congressional politics.

Even with the FBI investigating, the congressional investigations are crucial. The FBI inquiry is either a counterintelligence probe or a criminal investigation (or maybe both). Neither of those are designed or intended to provide a full accounting to the public. An FBI criminal inquiry (usually) only yields public information if someone ends up being charged with a crime and the case goes to trial. And in such instances, the only information that emerges is material necessary for the prosecution of the case. That could be a small slice of whatever the bureau obtained.

A counterintelligence investigation aims to discover and possibly counter a foreign actor’s effort to target the United States with espionage, covert action, or terrorism. These sort of probes tend to stay secret unless they result in a criminal case. (Perhaps a spy is discovered and arrested, or a would-be terrorist indicted.) In an unusual move, the intelligence community, at President Barack Obama’s direction, did release some of its assessments regarding the Russia hacking. But whatever the FBI and other intelligence agencies may be investigating, their efforts are not likely to produces a comprehensive public accounting of this double scandal: Vladimir Putin’s attack on the US election and the interactions between the president’s crew and the foreign power that waged this political warfare.

As of now, that’s the job of the two congressional intelligence committees. Both are under the direction of Republicans who have supported Trump and participated in White House spin efforts. Both are moving forward cloaked by their customary secrecy. And both have yielded no indications yet that they will produce the investigations and public findings necessary to resolve these grave matters.

UPDATE: At a press conference on Monday morning, Nunes said that his committee has only completed “the scoping of our investigation” and has not yet begun gathering evidence.