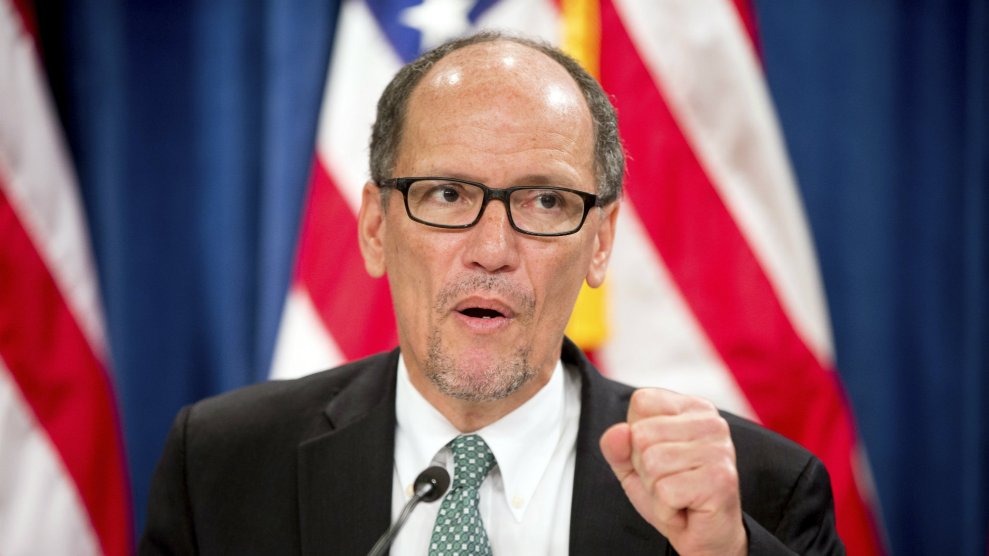 Progressive Democrats gazing upon the fight for the leadership of their party ought to be delighted. The two leading candidates for chair of the Democratic National Committee—Rep. Keith Ellison of Minnesota and Labor Secretary Tom Perez—are each battle-hardened and experienced progressives with much to offer their partisan comrades. Yet the contest for the DNC’s top post has widely been cast as a clash between wings of the party, with Ellison as the champion of the insurgent left and Perez as the candidate of the establishment. That depiction misrepresents the face-off and fixates on the wrong question: who has better progressive street cred? With the Democrats deep in the hole—a minority in both houses of Congress, out of the White House, holding only 16 governor slots and merely 31 of 99 state legislative chambers, and lacking a deep bench or a flock of rising stars—the tussle for DNC chief ought to focus on who can best do the nuts-and-bolts job of rebuilding the party from the ground level.

It’s tempting to view this contest as mostly symbolic. The Democratic primary battle of 2016 pitted Bernie Sanders’ revolution against Hillary Clinton’s pragmatic centrism. Many of Sanders’ supporters saw her as a corporate Democrat out of touch with—but eager to exploit—the party’s progressive grassroots. Many of Clinton’s supporters regarded him as an insurgent who was no true Democrat but happy to trigger tension within the party for his own political advancement. And since Election Day, there has been much jabbering about the rift that remains, with this talk concentrating on the resentment festering among Sanders fans who believe party insiders conspired to sink his candidacy.

So Ellison, one of the few House Democrats to endorse Sanders’ presidential run, has been seen as something of a consolation prize—or an offering that can help heal the fractured party. His early entry earned him a rash of key endorsements, including from Sanders, Sen. Elizabeth Warren, and Sen. Chuck Schumer. For a few weeks, Ellison, with support from both ends of the Democratic spectrum, seemed like a unity candidate on an easy path to victory.

Then Perez joined the race. He was not a last-minute contestant shoved into the contest by Democratic establishmentarians looking to thwart Ellison, the first Muslim elected to the House—though some Obama loyalists within the party were clearly not keen on Ellison. Perez, who has been busy finishing up at the Labor Department before handing over the keys to Trumpsters, merely needed more time to make his decision, according to his camp. Yet when Perez, who had endorsed Clinton in the 2016 race, announced his bid, several unions, including the AFL-CIO, which have worked closely with him, were already on the Ellison Express. (Perez has since been backed by the United Food and Commercial Workers, the United Farm Workers, and the International Association of Fire Fighters, and the Democratic governors of Colorado, Louisiana, Rhode Island, and Virginia.) And with Perez’s entrance, some Sanders folks started claiming that the Evil Empire—that is, the poohbahs of the party—was once again seeking to crush a progressive insurgency. (Ellison backers have been ticked off that his Democratic opponents have pointed to a handful of Ellison’s remarks and his associations with radical black Muslims in the 1990s to undermine his bid.)

This wing-versus-wing dustup is unfortunate for the party. The vote for DNC chair—the person who will be stuck with a mountain of mundane but important tasks and responsibilities—probably should not be predicated on symbolism. Nor should it necessarily be a contest over competing issue platforms—unless the issue divide truly defines the future course of the party. And that’s not what is at stake here. Certainly, Perez, while serving in President Barack Obama’s Cabinet, did not oppose the Trans-Pacific Partnership, which was backed by the president, and Ellison was a critic of the trade pact. But there’s truly not much ideological distance between the two. They are both grassroots-minded progressives. Ellison, before being elected to the House, was a community activist and operated a civil rights, employment, and criminal defense law practice in Minneapolis. Perez, the Buffalo, New York-raised son of two parents exiled from the Dominican Republic, was once the head of CASA de Maryland, an organization advocating for and providing services to immigrants.

And there’s no big difference in their big-picture approaches to what must be done within the DNC. Ellison’s website declares, “We must energize Democratic activists across the country and give them the tools to build the Party from the bottom up. Beyond a 50-state strategy, we need a 3,143-county strategy…We must also reclaim our history as the Party that stands with working people.” Perez’s website says, “In the years ahead, we must strengthen our team, and our bench, from the ground up. And we must stand up to protect President Obama’s accomplishments. But most of all, we need to listen. We need to listen to Democrats at every level, empowering them to fight for progressive values and a vision of opportunity and optimism. And we need to listen to voters, up and down the ballot, who are asking us to stand behind them.” You could transpose these statements and not notice it.

At this point, the Democratic Party needs much rebuilding—which entails fundraising, strategizing, candidate recruitment, messaging, organizational development, and more—from local precincts to the national level. So it might be best if the selection of the DNC chief was more job interview and less political wrestling match. Yeah, right. But many of the 447 members of the Democratic Party’s national committee, who are the only voters in this contest, might actually view the race in such a way. (This group includes state chairs looking for a national chair who will get them the help and resources they need to succeed at home.) And for them, Perez’s résumé could hold strong (and progressive) appeal. (Association declared: Perez is a neighbor, and several times I have socialized in groups with him.)

During the [George W.] Bush years, the division had been marred by partisan politics and declining civil rights enforcement. But since Perez took the helm, the division has blocked partisan voting schemes, cracked down on police brutality, protected gay and lesbian students from harassment, sued anti-immigrant Arizona sheriff Joe Arpaio for racial profiling, stood up against Islamophobia, and forced the two largest fair-housing settlements in history from banks that discriminated against minority homeowners.

While Perez was heading the civil rights division, it mounted a record-breaking number of probes into police abuse, and it achieved wide-ranging agreements to clean up police forces accused of misconduct.

After taking charge of the Labor Department in 2013, Perez fired up that agency. As Politico noted,

It was one of the federal government’s sleepier outposts for most of the dozen years that preceded Perez’s arrival just over one year ago. But Labor has been newly energized under Perez. “Enforcement activity is up,” Alfred Robinson Jr., who was an acting wage and hour administrator for the Labor Department during the George W. Bush administration, noted earlier this month in a blog post. The department has also raised its public profile on issues like minimum wage and paid medical leave and lavished favorable attention on companies that give employees what Perez calls “voice.”

At the Labor Department, Perez was in charge of an organization with 17,000 employees, a multibillion-dollar budget, and offices throughout the nation. And he pocketed a number of policy wins. He expanded the overtime rule for millions of workers. He helped resolve the Verizon strike and achieved protections for Verizon’s retail workers. On his watch in 2016, the department collected $266 million in back pay owed to workers. He pushed for expanded paid sick leave. The department issued a new rule to protect workers in construction and manufacturing from exposure to dangerous levels of silica dust, which can cause disease and cancer. It raised the minimum wage and and provided extended overtime protections for 2 million home health care workers. The department issued an important conflict-of-interest rule forcing retirement advisers to place clients’ interests ahead of their own, an Elizabeth Warren-like measure that could save Americans billions of dollars per year.

Perez has had an impressive run at Labor, overseeing a big bureaucracy and achieving results. He has put his values into practice. Ellison has done similar as a member of Congress, mounting grassroots campaigns, raising money for Democrats across the country, and pushing pro-consumer financial reform legislation as a member of the House financial services committee. If DNCers want to send a welcoming signal to aggrieved (rightly or wrongly) Bernie-ites when they vote on February 24—and avoid possible further acrimony between Party HQ and progressive activists—Ellison is the obvious choice. But if there is more to the vote than that—and this race is removed from the never-ending conflict between the party and its progressive base—Perez is a strong contender. He is a solid progressive with a record of getting stuff done. His prospects will be shaped by whether party officials (they are the only ones who have a vote) consider this contest an act of atonement and reconciliation or a hiring decision.