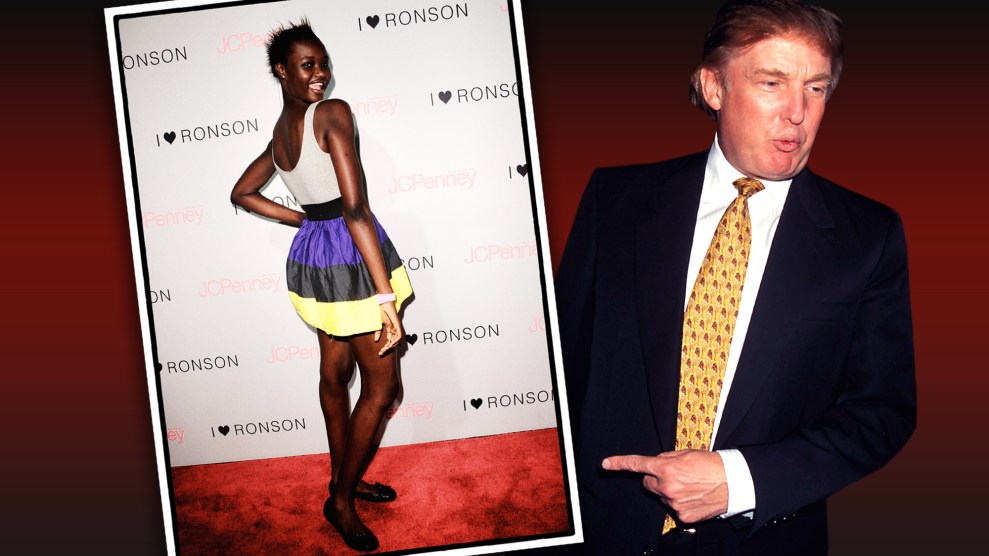 Ataui Deng signed to Trump Models in 2008. "It blew my mind to be working with all of these unique designers," she told Teen Vogue.Deng: Sharkpixs/ZUMA Press; Trump: Rose Hartman/ZUMA Press

One of Donald Trump’s top fashion models was a refugee who escaped war and famine in her home country of Sudan as a child before rising to the top of New York’s fashion world as a recruit for the president’s prestigious modeling firm.

But if she had tried to come to the United States in 2017—while her former boss now sits in the White House—instead of in 2004, Ataui Deng may never have been allowed into this country.

At the end of his first week in office, Trump signed an executive order immediately suspending America’s refugee resettlement program for 120 days (while barring Syrian refugees indefinitely) and halting for 90 days all immigration from seven predominantly Muslim countries, including Sudan.

The constitutionality of that order is currently being challenged in court by a coalition of legal groups led by the American Civil Liberties Union, after a federal judge in New York issued a temporary nationwide stay late Saturday night barring deportation for people trapped in airports around the country (or those currently en route). Several other federal court rulings have since sided with the challengers to Trump’s presidential order.

While the president denied on Saturday that his current plan amounts to a “Muslim ban,” as a candidate he called for “a total and complete shutdown of Muslims entering the United States.”

No matter what it’s called, if Trump’s order had been in effect back in 2004, it would have prevented his own modeling agency, Trump Model Management, from hiring a big new star.

Deng, now 25, came to the United States when she was 12. She was one of some 3,500 Sudanese refugees who fled the war-ravaged country for the United States in 2004. Her family was resettled in San Antonio, Texas, where her mother worked as a housekeeper and a custodian at a local hospital, and the young Ataui learned English and dreamed of being a model, according to a 2009 profile in the San Antonio Express-News. “I’ve never met a student with such a strong determination,” Deng’s English teacher told the Express-News.

Deng signed with Trump’s agency in September 2008 at the age of 16, after she was spotted at a talent competition in a shopping mall. She was quickly whisked away to hit the runways of New York’s fashion week, promoted by some of the best in the business. “It blew my mind to be working with all of these unique designers,” Ataui told Teen Vogue in 2010. She worked with fashion bigwigs including Zac Posen, Oscar de la Renta, Diane von Furstenberg, and the late L’Wren Scott. She even became the face of a 2013 fashion campaign for pop superstar Rihanna.

“I think Ataui, through the hardships that she’s had in life, through what she’s seen, it’s probably made her stronger.”

Deng was part of a wave of popular models of Sudanese descent who hit the American fashion industry around the same time, including Grace Bol, Atong Arjok (who is also a Trump Model), and Ajak Deng. (Ataui Deng did not respond to an emailed interview request from Mother Jones.)

Trump’s agency was thrilled by her performance—and praised her tough history as a refugee. “I think Ataui, through the hardships that she’s had in life, through what she’s seen, it’s probably made her stronger,” Corinne Nicolas, president of Trump Model Management, told the San Antonio Express-News. “Ataui was in demand by every agent in New York.”

“I do think she has the potential to be one of the big names,” Nicolas said.

Deng’s New York career wasn’t all rosy. She was reported missing in 2014, after she secretly checked herself into a Manhattan hospital battling mental health problems, according to news reports at the time. Her mysterious disappearance sparked a celebrity-fueled social-media campaign to find her, including posts from Rihanna. Her modeling career appears to have tapered off somewhat after the incident, and she is no longer listed on the Trump Models website.

Last August, Mother Jones published the accounts of three former Trump Models, all of them foreigners, who described modeling for the president’s agency while holding tourist visas that did not permit them to work in the United States. Trump holds an 85 percent stake in the company; he recently signed a letter resigning as a director of the company.

Trump Model Management did not respond to multiple interview requests about how the president’s immigration ban might affect its business. On Saturday afternoon, first lady Melania Trump’s own immigration attorney, Michael Wildes, who has also represented the Trump Organization in numerous immigration cases, spoke out against the president’s order, during an interview on MSNBC. “This is not the way you deal with people’s lives,” he said.

Despite facing several federal lawsuits and unleashing travel chaos around the world, Trump asserted on Saturday that the implementation of his executive order was running smoothly. “It’s not a Muslim ban, but we were totally prepared. It’s working out very nicely. You see it at the airports, you see it all over,” he said.