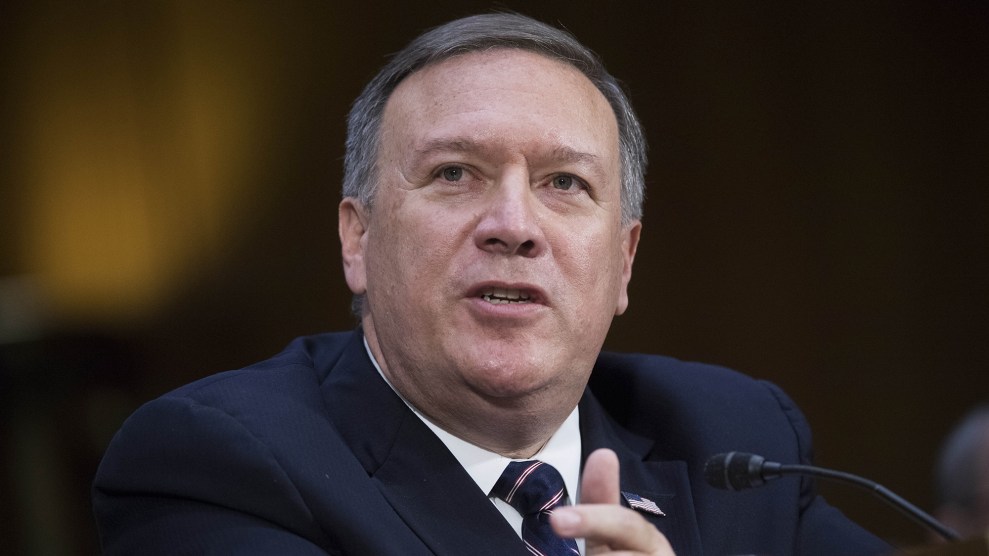 The Senate is set to confirm as the new head of the CIA on Monday a man who is open to revisiting the practice of waterboarding—even if that’s not what he told the Senate Intelligence Committee during his confirmation hearing.

Rep. Mike Pompeo (R-Kan.), President Donald Trump’s pick to lead the nation’s top spy agency, appeared before the committee on January 12 for a televised hearing. Sen. Dianne Feinstein (D-Calif.) asked Pompeo whether he’d restart the “CIA’s use of enhanced interrogation techniques that fall outside the Army field manual.” That was a clear reference to waterboarding, a practice considered torture by many international experts.

“Absolutely not,” Pompeo responded. He said he would always comply with the law and couldn’t “imagine [he] would be asked by the president-elect or then-president” to have the CIA torture someone.

But on Friday, the day Trump was assumed the role of president, the intelligence committee released Pompeo’s written answers to questions posed by senators after the initial hearing. Feinstein again brought up waterboarding, asking specifically whether Pompeo would commit to “refraining from taking any steps to authorize or implement any plan that would bring back waterboarding or any other enhanced interrogation [technique].” Pompeo gave a different answer this time.

“I will consult with the experts at the Agency and at other organizations in the U.S. government on whether the Army Field Manual uniform application is an impediment to gathering vital intelligence to protect the country or whether any rewrite of the Army Field Manual is needed,” Pompeo wrote. “If any such differences are justified, a fundamental requirement is that such differences fully comply with law, including laws governing the treatment and interrogation of individuals.”

The written questions also elicited Pompeo’s thoughts on the CIA’s collection of publicly available information on Americans, a controversial practice given that the CIA is generally a foreign-focused intelligence agency that’s supposed to engage in only limited domestic activity. “I made the statement…in the context of if ‘someone’s out there on their Facebook page talking about an attack or plotting an attack against America,'” Pompeo wrote in response to questions from Sen. Ron Wyden (D-Ore.). “In such cases, publicly available information can provide relevant information and generally involves fewer privacy concerns than other collection techniques.”

Pompeo added that “of course there are boundaries” to the CIA’s collection of such information and that any such activity would be “conducted in accordance to the Constitution, statutes, and applicable presidential directives.”

Pompeo’s thoughts on this matter were laid out in a January 2016 Wall Street Journal op-ed, in which he said that Washington was “blunting” the “surveillance powers” of the intelligence community by refraining from collecting people’s personal information and called for a “fundamental upgrade to America’s surveillance capabilities.” He said the country should re-establish its bulk metadata collection program and “[combine] it with publicly available financial and lifestyle information into a comprehensive, searchable database. Legal and bureaucratic impediments to surveillance should be removed.”

Wyden asked about the database in the written questions. Pompeo responded that he hadn’t “consulted legal experts on a hypothetical database” or studied which third-party information would be available to include in the database.

On Saturday, Human Rights Watch urged senators to vote against Pompeo’s confirmation, citing concerns about his thoughts on torture and surveillance.

“Pompeo’s responses to questions about torture and mass surveillance are dangerously ambiguous about whether he would endorse abusive practices and seek to subvert existing legal protections,” Maria McFarland Sanchez-Moreno, the group’s US program co-director, said in a statement. “Pompeo’s failure to unequivocally disavow torture and mass surveillance, coupled with his record of advocacy for surveillance of Americans and past endorsement of the shuttered CIA torture program, make clear that he should not be running the CIA.”