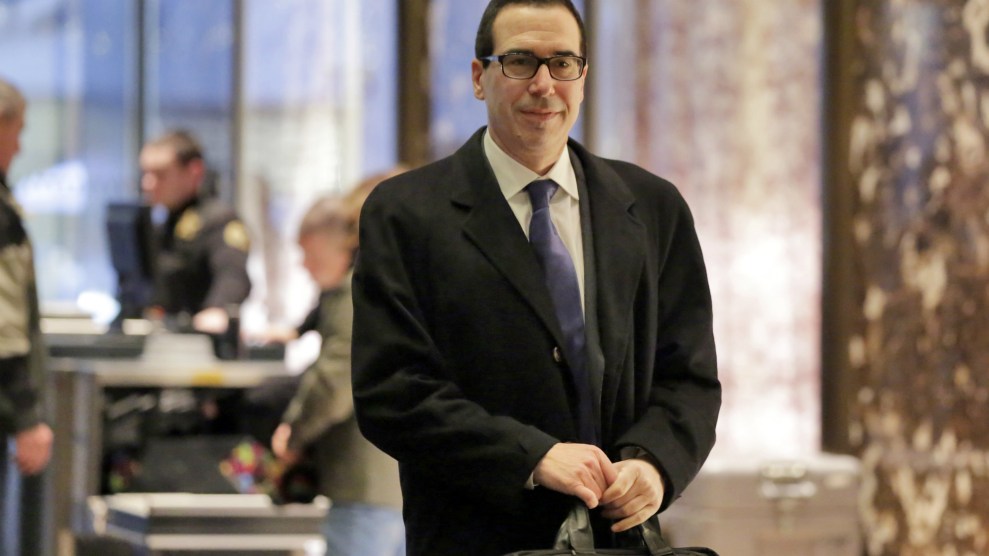 After Donald Trump nominated longtime Goldman Sachs executive Steven Mnuchin to be secretary of the treasury, Sen. Elizabeth Warren, the Democrats’ leading anti-Wall Street crusader, asked to include “victims of Mnuchin’s foreclosure machine” at his Senate confirmation hearing. According to Warren, Senate Republicans rebuffed her request. So on Wednesday, one day before Mnuchin goes before the Senate, Warren convened a panel of women who testified that OneWest Bank, under Mnuchin’s leadership, ruthlessly tried to take away their homes.

“If Steve Mnuchin become secretary of treasury, if he runs our country the way he ran OneWest Bank—cutthroat—this country is in trouble,” said Sylvia Oliver, a New Jersey woman whose home was scheduled to be foreclosed on by OneWest on Wednesday. According to Oliver, OneWest has refused to modify her mortgage, but she managed to stave off foreclosure with the assistance of Sen. Robert Menendez (D-N.J.), who was at Wednesday’s forum.

In early 2009, Mnuchin led a team of investors in purchasing failed home lender IndyMac from the federal government—after extracting a promise that the government would help pick up the tab for any losses—and took over as CEO of the bank, which changed its name to OneWest. During his tenure, which covered the time when the four women who testified ran into trouble with the bank, OneWest was known for its aggressive tactics in dealing with foreclosure. In 2015, Mnuchin sold OneWest to another California bank, CIT, for more than twice what he and his fellow investors had paid. Mnuchin, who had previously donated to Democratic candidates, joined Trump’s campaign fundraising team in May 2016, when Trump was still toxic to many Republicans, and he became one of Trump’s first announced Cabinet picks.

“The OneWest model was terrible for homeowners, but it was great for Mr. Mnuchin,” Warren said on Wednesday, claiming that Mnuchin pocketed more than $200 million from the sale to CIT. “At [Thursday’s] hearing, he will have the opportunity to explain why his years of grinding families into the dirt at OneWest Bank does not disqualify him from becoming the nation’s top economic official.” (A spokesman for Senate Finance Committee chairman Orrin Hatch did not respond to a request for confirmation that Warren had asked to include the foreclosure victims in Thursday’s hearing.)

Cristina Clifford, a California acupuncturist, told the panel that her business began to falter in 2009 and she struggled to make her mortgage payments to IndyMac. Clifford said the bank told her that she didn’t qualify for a mortgage adjustment because she had always made her payments on time. She said she stopped doing so, on the bank’s recommendation. But by the time she was approved for a mortgage modification and submitted the paperwork, the bank was under Mnuchin’s control. It cashed the check she sent with the paperwork, she said, but insisted it never received her application. This happened twice, Clifford said, and eventually the house was sold by the bank, even as she says her lawyer was attempting to work with OneWest to avoid a foreclosure.

Senate Democrats are expected to grill Mnuchin on OneWest’s business tactics tomorrow. The Hill obtained an advance copy of Mnuchin’s prepared statements and reported that he will defend OneWest as “an American success story.”

“My group had nothing to do with the creation of risky loans in the IndyMac loan portfolios,” Mnuchin reportedly plans to say. “We did this because we believed in our ability to rebuild and create a successful regional bank. We believed in recovery for the American economy.”