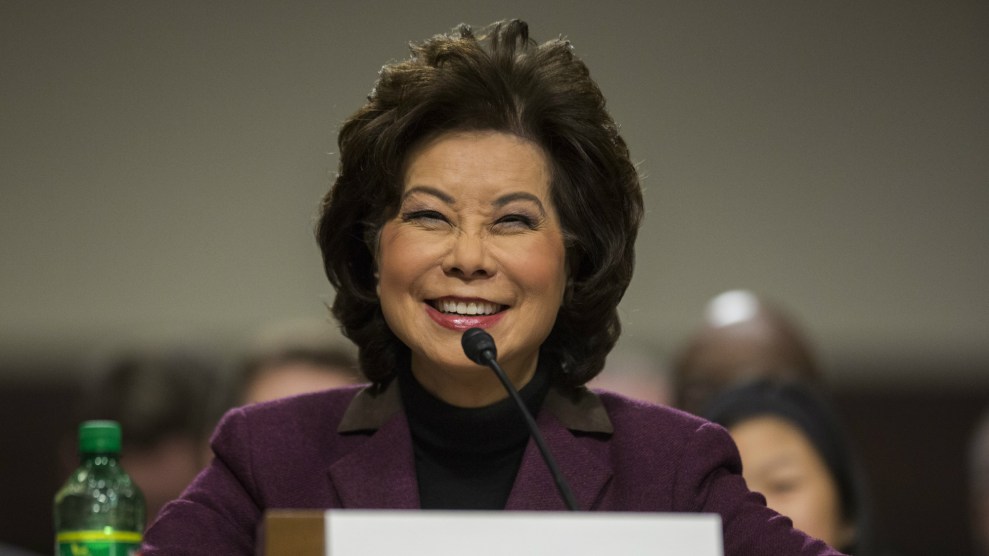 There were no demonstrations or outbursts from protesters at Elaine Chao’s confirmation hearing Wednesday to become President-elect Donald Trump’s secretary of transportation. The former secretary of labor in the second Bush administration may have not been loved by labor unions, but her previous experience as a deputy transportation secretary for George H.W. Bush makes her uniquely qualified for the job.

The most notable moments during Chao’s appearance before the Senate Science, Commerce, and Transportation Committee did not concern her positions on safety regulation, Trump’s infrastructure plan, or the self-driving car industry, but rather her marriage to Senate Majority Leader Mitch McConnell (R-Ky.). McConnell appeared at the hearing to introduce his wife.

“I regret that I have but one wife to give for my country’s infrastructure,” McConnell said, echoing the words of the former Senate majority leader Bob Dole in 1983, when he introduced his wife, Elizabeth Dole, for her confirmation hearing to be secretary of transportation in the Reagan administration. “She’s got really great judgment,” McConnell added, pausing for effect and appreciative laughter from his colleagues, “on a whole variety of things.”

McConnell’s quip was the first of a number of remarks focusing on Chao’s gender and marital status that male senators made during the hearing. Sen. Jim Inhoffe (R-Okla.) focused on Chao’s relationship to her father. “I keep thinking—last night, I was with you and your family, your daddy—how excited your daddy is right now thinking about the things that are going on, and that he is responsible for you and your performing and your cute little nieces,” he said at the start of his questioning. “As you well know, I’ve got 20 kids and grandkids. You’ve got some more work to do, but that’s alright.”

The comments were decidedly bipartisan. “I might just say although Sen. McConnell has left, he and I have something in common, which is we both married above ourselves,” Sen. Richard Blumenthal (D-Conn.) joked. He wasn’t the only one to say something to that effect.

“I have a great deal of respect for you, although now I have some frustration now with Mitch McConnell, being a young, single member of the Senate,” Sen. Cory Booker (D-N.J.) said. “He has never taken me aside to tell me how to marry out of my league.”

At the start of the confirmation hearing, chairman John Thune (R-S.D.) patted his committee on the back, noting that with its new members, it has the distinction of being the “Senate committee with the most women members ever.”

For her part, Chao played along. She joked about her relationship with McConnell, saying she planned to “lock in the majority leader’s support tonight over dinner.”

Chao is not alone. As the wife of a Republican leader, she has plenty of company.