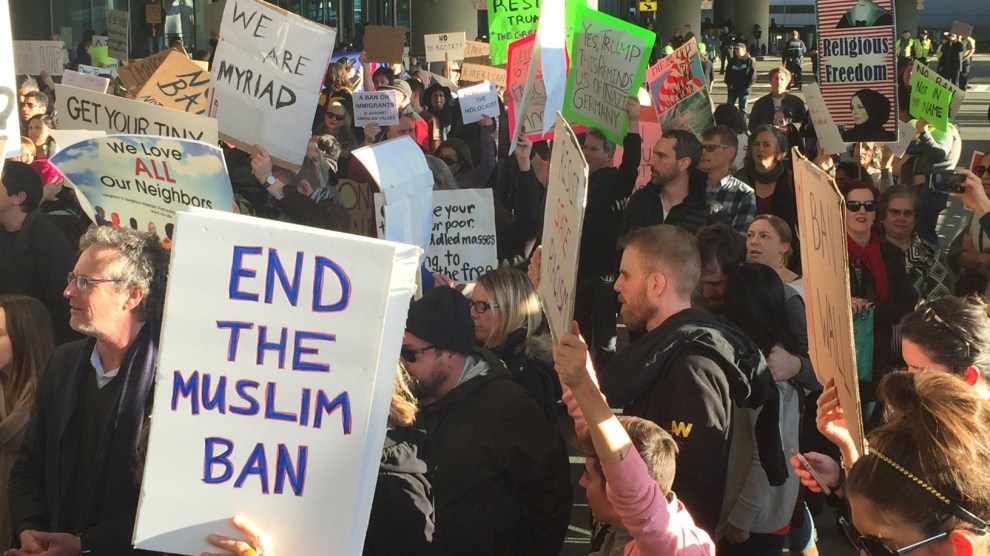 Update January 29, 2:20 p.m. ET: After staying past midnight Saturday evening, protesters say they’re planning on returning to SFO again on Sunday. At least one Iranian woman who was temporarily held at the airport was released, according to NBC. SFO released a statement on Sunday saying that it shared the concerns of protesters and had requested a “full briefing” from Customs and Border Protection.

Hundreds of people rallied at San Francisco International Airport Saturday, temporarily occupying the arrivals level in protest of President Trump’s “Muslim ban.” The crowd moved into the terminal after reports circulated that six immigrants were not being allowed to leave the airport as a result of the executive order.

The crowd chanted, “No ban, no wall, sanctuary for all,” and “let the lawyers in.”

Anoop Prasad, an attorney with the Bay Area-based Asian Law Caucus, told Mother Jones that he was aware of at least two US green card holders from the targeted countries who were en route to San Francisco and worried they would be detained. He said the organization had received dozens of phone calls from concerned community members about whether immigrants with legal permanent resident status would be allowed to enter the country. Prasad said he and other Asian Law Caucus members had been trying to get in touch with Customs and Border Protection officers so lawyers could talk to the families and be present for any interviews. As of Saturday night, they had yet to receive a response.

In New York, a federal judge in New York this afternoon granted an emergency stay of the order for that will allow anyone with a valid visa who was en route or in an airport when the ruling was filed to enter the US. Cheers erupted inside the San Francisco terminal when the news was announced.

Amazing roar from the crowd in SFO in response to national stay pic.twitter.com/Fm8i9JAWYU

Prasad said his group, too, might “seek legal options” if immigrants were not admitted. Lawyers from advocacy groups like the Council on American-Islamic Relations were also at the airport on standby.

“I’m happy about what happened in New York, but I wish the California governor would do something,” said Khaledh Tahan, 32, who attended the rally with her half-sister and her Syrian mother. “When I see all the different colors of people here, we feel united, powerful, like we can overcome this.”

“I hope this [protest] really does something,” said Rowa Alshalian, 40, who came to the US from Syria 20 years ago and joined in chants of “we are people, we are not illegal.”

The lieutenant governor of California just joined the protest at SFO. #MuslimBan pic.twitter.com/SvT1SytWEi

Near the airport’s Starbucks, a group of lawyers gathered to offer legal advice. Junaid Sulahry, an immigration lawyer in San Francisco, stayed at the airport for five hours. “We’re here, our phones are ringing off the hooks, and the idea is to come where the action is. People want to send a very strong message that this country was founded on people escaping religious persecution.”

Angelo Alcid, Union City. “If it means my arm gets tired holding a sign to tell people where to get legal help, well that’s good for me.” pic.twitter.com/4OlEx4Z50E

As the evening wore on, a group of people began weaving through the crowd to hand out apples, pizza, cheeseburgers, and granola bars. The protesters were appreciative.

SFO crowd broke into song for a few minutes. pic.twitter.com/eCijMsl29u

Protesters vowed not to leave until all those being held were released.