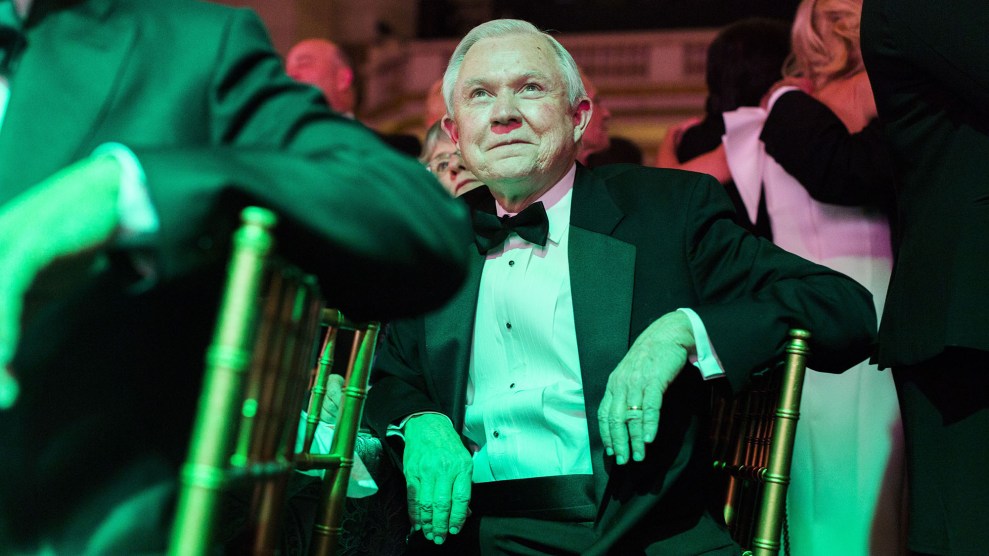 By day, Joe Tien is a math professor at Ohio State University, where he studies the spread of infectious diseases. His research maps how a disease like Ebola jumps from village to village and plots the best way to stop its spread. On his own time, Tien has begun putting his skills in network science toward other subjects, including the connection between white nationalists and American politicians.

After the election, Tien and two other mathematicians set out to map the relationship between white nationalists and US senators on social media. The results produced one clear outlier: Based on an analysis of senators’ Twitter followers, Sen. Jeff Sessions (R-Ala.), President Donald Trump’s nominee to be attorney general, had the most overlap with white nationalist groups and individuals.

“He’s the closest of all senators to the white nationalist groups,” says Tien.

Sessions has a controversial track record on matters of race, including allegations of racist comments toward black colleagues and the targeted prosecution of civil rights activists. But Tien was still surprised by the outcome of his research. He and his colleagues wrote a short paper on their findings and titled it “The Curious Case of Jefferson Sessions.”

Tien recently joined forces with UCLA mathematician Mason Porter and a third academic who wishes to remain anonymous to launch a new blog under the pseudonym Susan Bourbaki Anthony. (The name is a reference to suffragist Susan B. Anthony and an anonymous group of French mathematicians who published under the pseudonym Nicolas Bourbaki in the 1930s.) The goal is to use their expertise to provide objective data about issues they believe are important and nonpartisan, such as voting rights and racial equality. They plan to post their code online so people can test and use it.

For their second project on the relationship between white nationalists and politicians, Tien and his collaborators identified the Twitter accounts of seven white nationalist groups from the Southern Poverty Law Center’s list of extremist organizations. They added two other Twitter accounts to their list: those of prominent white supremacist David Duke and the website The Right Stuff, which Tien learned about through white nationalist propaganda posted on bulletin boards at Ohio State University after the election.* Tien and his colleagues downloaded the list of all the followers of these nine accounts and of the 100 US senators, resulting in a network of about 11 million people. They then identified the overlap, or “co-followership,” between followers of white nationalist groups and individual senators.

This work isn’t too far afield from Tien’s day job. “Rather than sets of communities or cities, we’re looking at Twitter accounts,” he explains. But in both cases, the patterns of connections create a network that can be mined for information.

Generally, the mathematicians’ algorithms found that senators with large numbers of followers were less closely tied to white nationalists, because the co-followership represented a smaller percentage of their overall followers. But there was one exception: Sessions. “Despite [his] reasonably large following,” the authors wrote, “the distance from Sessions to the white nationalist community was the closest of all senators.”

At the time of the analysis, conducted a few weeks after the election, Sessions had about 86,000 followers, more than many of his colleagues. But he had high levels of co-followership with white nationalist groups. About 7 percent of the white nationalists’ followers followed Sessions, compared to about 2 percent for the average senator, according to Tien.

Just five senators have a higher number of co-followers with white nationalist groups than Sessions. But unlike Sessions, each of those five has more than 1 million total followers, probably because they all ran for president at one time. These are Sens. Rand Paul (R-Ky.), Ted Cruz (R-Texas), Marco Rubio (R-Fla.), Bernie Sanders (I-Vt.), and John McCain (R-Ariz.). When Tien ran his numbers, about 4 percent of Sessions followers also followed at least one of the nine white nationalist accounts. The average co-followership among all senators was about 1 percent. Paul had the highest number of co-followers, but they represented just 1 percent of his total Twitter following. The senator with the lowest co-followership, Cory Booker (D-N.J.), was at 0.08 percent.

Tien’s analysis doesn’t explain why followers of white nationalist groups also follow Sessions, and he acknowledges that it’s not 100 percent airtight, since it may have factored in the accounts of bots and political reporters who follow white nationalists as part of their jobs. But it does demonstrate that Sessions draws significant interest from followers of prominent white nationalists. Despite Sessions’ record on civil rights, which includes a hardline anti-immigration position, Tien says he was surprised by the findings. “I didn’t think it would show up in the Twitter space,” he says. “I wasn’t sure that these guys were going to bother following Sessions.”

Correction: An earlier version of this article misstated how The Right Stuff propaganda was disseminated.