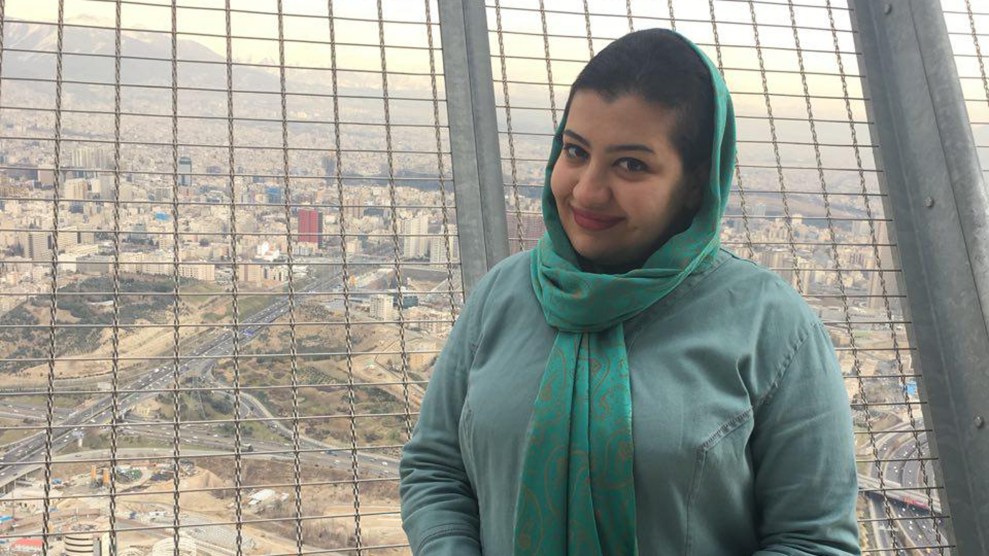 With a stroke of a pen, President Donald Trump threw Shadi Heidarifar’s world into a tailspin. The 23-year-old philosophy student lives in Tehran, Iran, and has spent years trying to get into a university in the United States. She was recently admitted to NYU, her top choice, and was preparing to apply for a student visa. (Each year, some 4,000 Iranians receive visas to study at American universities.) But with Trump’s executive order on Friday, the United States has put a temporary block on immigration from Iran and six other predominantly Muslim countries, which means Heidarifar may not make it to class this fall. I reached out to hear her story—told in her own words below.

My name is Shadi Heidarifar—in Persian, Shadi means “happiness.” I’m 23 years old, and I’ve lived my whole life in Tehran, the capital of Iran. My father recently retired from his job as a manager at a gas station, my mother is a housewife, and I have a younger brother in high school.

I was the first in my family to go to university—I finished my bachelor’s in philosophy at the University of Tehran—and I recently got admitted to NYU’s philosophy department, where I planned to get a master’s degree. It was very difficult to come up with the money for the application. Most American universities have an application fee of around $70 to $100, which is enough for a month of living expenses in most cities of Iran. Money can be tight sometimes, so I worked part time at a bookstore near my university for more than a year to pay the application fees.

I’m interested in studying ethics and political philosophy—questions like what should our values be in a modern society, how can we act morally, and what it’s like to have a democracy. I hope I can teach in these areas. I want to help this country and other countries come together and have good relations, by thinking about the choices we should make in social and political relations.

When I was accepted at NYU, I was over the moon. It’s the first-ranked university in my major, so every philosophy student dreams about NYU. I spent three years trying to get admitted, to improve my English, to keep in contact with the faculty there.

I’ve never been to the United States before because it’s too hard to get a tourist visa for Iranians, but since I was in high school, I’ve liked the idea of living in NYC. I think US culture is popular among most young people around the world—most people know Hollywood and watch lots of movies. I myself am interested in jazz music, like Sinatra and Armstrong. Of American food, pizza is most famous in Iran, and most fast food from the USA is popular. For me, NYC is among the greatest cities in the world—it is a big, crowded, modern city like Tehran, and its diversity is unbelievable.

If he wants to make America great again—and I think it is already great now—maybe he should only sign orders that affect diversity in a democratic way that everybody feels is respectful.

And education is important in my family. “It will help you live a much better life than your parents lived,” my father says to me all the time. It may sound a little strange because people in most Western countries think differently about our life in the Middle East, but my father is my greatest supporter—he wants me to never give up. Still, while there have been many improvements, it’s hard for women to continue their studies here. In almost every major, it’s a priority for universities to choose men instead of women students. This situation gets worse at the graduate degree level, and this is one reason why I want to study abroad. Also, it is hard for women here to find work and get paid equally after they graduate.

At the end of August I’m supposed to start classes, but getting a student visa is so hard for us, so if we want to reserve an appointment [with the US Embassy], we should do this now. Now I can’t, and I’m afraid I will miss the fall semester. In fact, I’m really worried I might not be able to go at all. If I cannot get a visa in time, I will enroll in another university—I’ve been admitted to schools in Canada, the UK, Germany, and Austria. But I believe NYU is a better place for me. I wanted to work there with the greatest philosophers in my major—David Chalmers, Ned Block, Paul Boghossian.

It’s not just me. A lot of Iranian students spend so much energy and time, studying hard to get admission to American universities. Some have gotten a visa but now cannot catch a flight, and some caught their flight but cannot enter the United States. Some Iranian men and women are in the USA and their spouse is in Iran; they cannot see each other. All of us are really hopeless. But here is one point that we strongly believe, even without visiting the USA: We Iranian students strongly believe that diversity in ethnicity, race, religion, and color is one of the greatest strengths of the United States. And Trump’s Muslim ban will destroy this.

I did not expect him to win the election. I thought Hillary Clinton would win. Anyway, I think he loves the USA, but his way of protecting the country is different. Building a wall, separating families from each other, and banning visas to people in Muslim countries just makes our world too scary. If he wants to make America great again—and I think it is already great now—maybe he should only sign orders that affect diversity in a democratic way that everybody feels is respectful. Remember that America is not a country just for Americans; there are lots of Iranians, Mexicans, Chinese. There are too many American families that have a foreign member, and his decision will tear so many families apart.

I don’t know how he could sign an order that doesn’t make sense. It is ridiculous to call a person a terrorist or a supporter of ISIS just because of her religion or nationality. Iranian students think the most prosperous universities around the world are in the United States. We don’t support ISIS or anything like that—we hate them. We also have so many different religions in Iran. Also, most of the Iranian students in the USA are really successful and help American society to become better in different ways, such as working in great companies, becoming businessmen, professors, etc. This will make us lose everything we built over the years to get admission to US universities.

I study philosophy because I think it can help us to know how to keep ourselves, how to keep our commitments to democracy, how to help make the world great. I think it’s unfair for Iranian students to lose our dreams, our hope, and our admissions just because we are Iranian and Muslim.