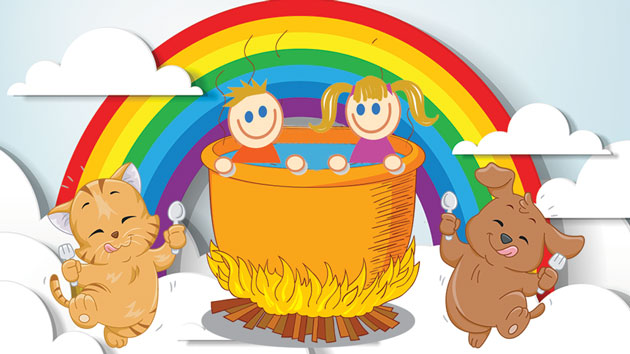 A cat and dog dance around a pot of boiling human children on a cloud as they excitedly prepare to feast. Photoshop by Ben Dreyfuss

Bipartisanship comes to the Trump administration!

Robert F Kennedy JR says Trump asked him to chair a commission on vaccine safety and he agreed. Has lobbied for vaccine exemptions.

Vaccines work and they don’t cause autism. Them’s the facts.

There are real costs to this nonsense. Look at this map that Kevin Drum wrote about in 2014:

Use of the MMR vaccine plummeted during the aughts, as vaccine-autism hysteria was spread by charlatans and the ignorati. Needless to say, this did nothing to affect the incidence of autism, but it sure had an effect on measles and mumps. To this day, though, I don’t think any of the vectors of this hysteria have so much as apologized. It’s shameful.

Trump has a long history of spreading anti-vaxx bullshit. So, too, does RFK Jr (when he’s not slinging insane theories about Diebold and Ohio). More than 10 years ago he went on the Daily Show and, in one of Jon Stewart’s most shameful moments, was allowed to spew his brand of anti-vaxx crack-pottery. Liberals like RFK Jr because liberals like love RFK, but Robert the Younger is loony tunes on vaccines. He’s in the same boat as Jenny McCarthy.

Vaccine exemptions are bad, quoth the AMA, common sense, and anyone who has ever bothered to Google the term “herd immunity.” (Read this, if you don’t believe me.) We seemed to be making progress slowing the anti-vaxx lemmings but with Trump set to enter the White House on January 20 there is a real chance that vaccine hysteria will spread like measles. Vaccines should not be political. But elections have consequences. And once people believe this nuttery, you can’t really change their minds. People who believe crazy things do not respond to well to facts.

Even the Catholic Church, not known as a bastion of scientific forward-thinking, says you need to vaccinate your kids.

Don’t listen to lunatics even if they do come bearing the seal of the President.

Update 7:20pm Tuesday 1/10/2017: Trump spokesperson Hope Hicks has denied the report that they’re tapping RFK Jr to be on a vaccine commission, so maybe it’s not true! But RFK Jr has confirmed the report so maybe it is true! Maybe RFK Jr was confused? Maybe Trump is backing off it in the face of predictable criticism? Neither Trump or RFK Jr live in the world that actually exists so who the hell knows what’s going on. Vaccinate your kids.

Update 2: 1:45pm Thursday 1/12/2017: Unnwayed by Hope Hick’s denial, Robert Kennedy Jr told his environmental group Wednesday that he expects to take a leave of absence to work on Trump’s bullshit vaccinations commission. It remains unclear if this commission will also look into chemtrails or get the truth about everlasting gobstoppers.