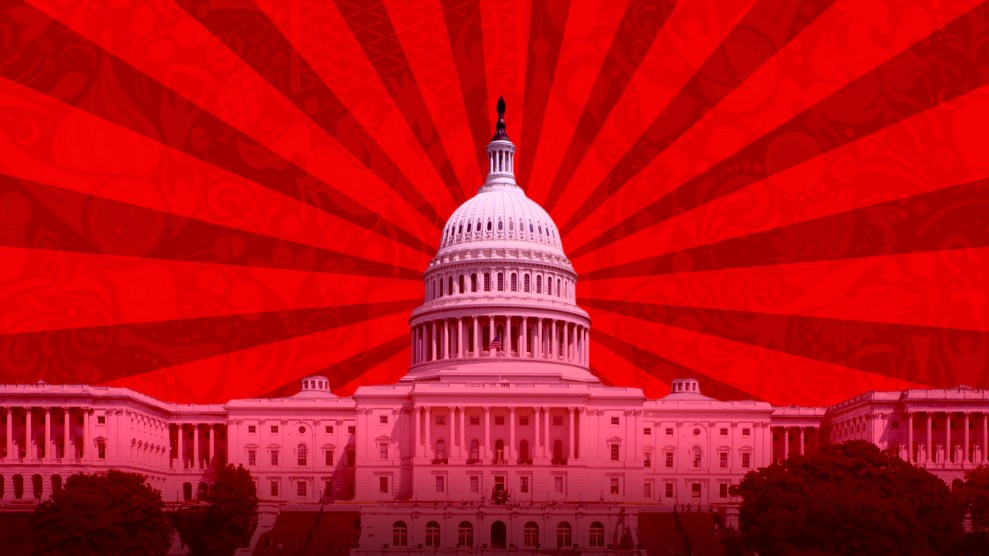 At Thursday’s Senate Armed Services Committee hearing on the Russian hacking of Democratic targets during the 2016 campaign, it was obvious that most Republicans don’t want to get involved with a matter that puts them on the wrong side of Donald Trump, who has repeatedly questioned the intelligence community’s conclusion that Moscow meddled in the election in order to help him win. Sen. John McCain (R-Ariz.), the chair of the committee, and Sen. Lindsey Graham (R-S.C.), did each decry the Russian intervention and called for a thorough investigation. Yet the other GOPers on the panel were largely mute. This silence suggested that Rs on the Hill are generally not eager to dig into this touchy (for Trump) subject. And that explains why McCain has so far failed in his effort to persuade Senate Majority Leader Mitch McConnell to set up a special select committee to conduct a probe. Instead, McConnell prefers to leave most of this work to the (naturally) overly secretive Intelligence Committee, on which neither McCain nor Graham, the two loudest Republican voices on this front, sit. These machinations demonstrate that politics is shaping how congressional Republicans are reacting to a fundamental threat to American democracy and electoral integrity. And that makes all the more relevant a revived Democratic push to create an independent commission to investigate Russian intervention in the election.

Last month, Rep. Elijah Cummings (D-Md.), the top Democrat on the House Government Oversight Committee, and Rep. Eric Swalwell (D-Calif.), the senior Democrat on the House Intelligence Committee, introduced a measure to create a bipartisan commission—much like the highly praised 9/11 commission—to probe the Russian hacking. Their proposal did not gain a great amount of attention. Even top Democrats on Capitol Hill who supported the idea were not loudly demanding a robust investigation. But on Friday afternoon, Cummings and Swalwell reintroduced the bill, and this time more than 150 of their fellow House Democrats, including the top Democrat on every House committee, were co-sponsoring the proposed legislation.

The bill would establish a 12-member commission with the authority to interview witnesses, obtain documents, issue subpoenas, and receive public testimony. The panel would examine attempts by the Russian government to influence, interfere with, or undermine trust in last year’s US elections. And the commission would have to issue a report with recommendations within 18 months.

With this move, House Democrats are upping the ante, just as the Obama administration is completing its review of the Russian intervention in the election and Trump keeps tweeting positively about Vladimir Putin and suggesting the story has been hyped to taint his election. This week, a bipartisan collection of former senior intelligence and defense officials—including former Secretary of State Madeleine Albright, former Secretary of Defense Leon Panetta, and former Acting Director of Central Intelligence Michael Morrell—issued a letter urging Congress to create this sort of commission to “understand fully and publicly what happened, how we were so vulnerable, and what we can do to protect our democracy in future elections.”

It’s unlikely that many, if any, Republicans on the Hill will embrace this proposal. But Dems are attempting to generate political pressure. “There’s overwhelming agreement across America that our democracy was attacked this past presidential election,” Swallwell says. “Now everyone’s asking what our nation’s leaders will do about it.” For most Republicans, the answer seems to be: not much.