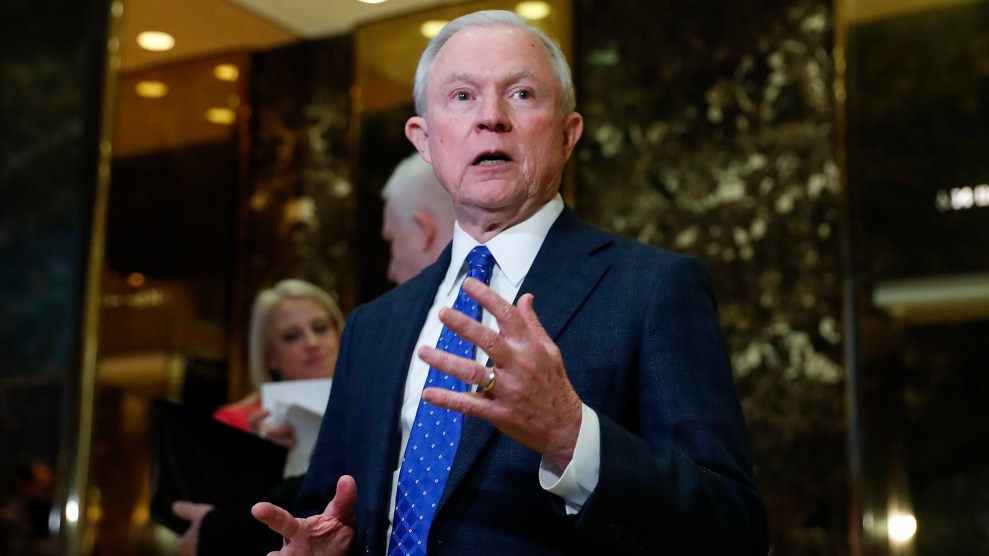 Before he joined the Senate 20 years ago, Jeff Sessions supported imposing harsh penalties on juvenile offenders and even bringing back chain gangs—policies that were extreme even for their time and contrast sharply with bipartisan efforts today to move away from the tough-on-crime approach of the 1990s.

Now President-elect Donald Trump’s nominee to be the next attorney general, Sessions stands on the threshold of overseeing the country’s criminal justice system and setting sentencing guidelines for prosecutors. The Alabama Republican will face questions about his views on criminal justice at his confirmation hearing on Tuesday.

During his campaign for Alabama attorney general in 1994, Sessions came out in support of a series of reforms to crack down on juvenile offenders—even nonviolent ones. According to a Birmingham News series at the time that was shared by the Democratic research firm American Bridge, Sessions proposed tough penalties “that emphasize discipline and responsibility to deter non-violent first-time offenders from further crimes.” Sessions also wanted to treat repeat juvenile offenders as adults and to use juvenile records when sentencing people for crimes they commit as adults. Further, Sessions hoped to move funding from the Department of Corrections to pay for more jail space and boot camps for juvenile offenders. He also suggested using work camps and recycling programs to “make punishment meaningful.”

Once elected attorney general, Sessions supported legislation in 1995 to crack down on juvenile offenders. Under the bill, according to the Birmingham News, children younger than 14 “who commit crimes that would make them eligible for the death penalty if they were adults” could be tried as adults in criminal court. Though they would not be eligible for the death penalty, they could be sentenced to life in prison and would serve no less than 20 years.

Sessions was also a fan of tough punishments, even those that were constitutionally questionable. In 1995, Alabama reinstituted chain gangs in its prisons—the practice of shackling prisoners to one another and forcing them to perform hard labor. The custom had died out, but in 1995 Alabama Republican Gov. Fob James brought it back. Sessions, then state attorney general, was on board. “I believe it’s constitutional and proper,” he said at the time. He also said he intended to “aggressively defend any legal challenge against it.” In December 1996, days before Sessions left for the US Senate, his office released a legal opinion declaring the chain gangs legal.

Though these proposals were made years ago, Sessions remains a hardliner when it comes to sentencing and criminal justice reform more broadly. Last year, Sessions successfully opposed bipartisan legislation to loosen mandatory minimum sentences for some crimes and reduce recidivism rates. Sessions was one of a handful of law-and-order Republicans who helped stall the bill in the Senate Judiciary Committee despite the support of many Republicans. If Sessions is confirmed as attorney general, his departure from the Senate could help the bill pass this year. But Sessions will have significant power in his new role to set sentencing guidelines, in addition to overseeing police departments and prisons. Through so-called charging memos, the attorney general sets sentencing guidelines for prosecutors throughout the country. Sessions would also have a voice on the US Sentencing Commission, which develops sentencing guidelines for federal courts.

As the Marshall Project recently explained:

Former Attorney General Eric Holder advised against piling up charges for low-level drug offenders and seeking maximum sentences, a policy Sessions is unlikely to continue. Sessions was a longtime supporter of eliminating sentencing discrepancies between crack and cocaine offenders, but he helped block broader drug sentencing reform in the Senate this year despite wide bipartisan support, saying it would release “violent felons” into the street.