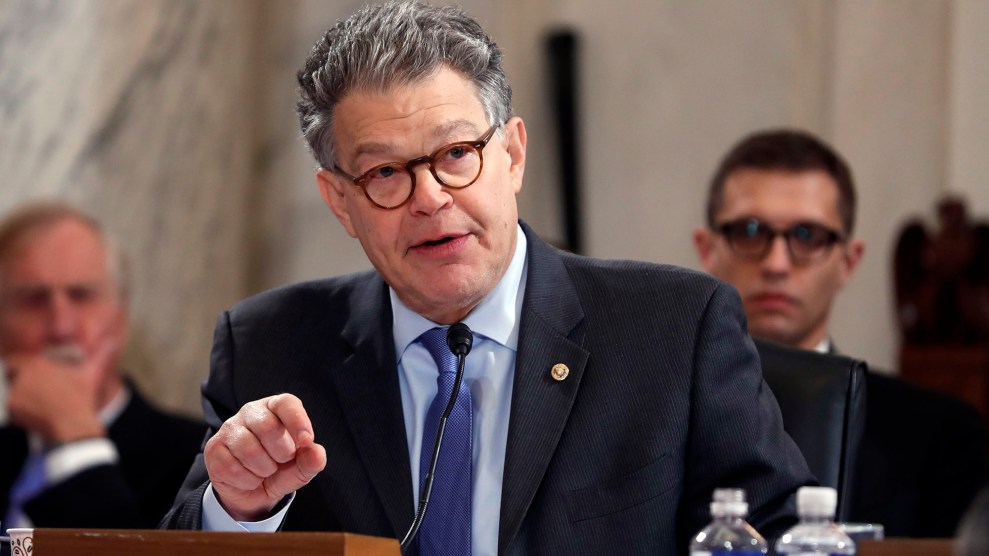 Sen. Al Franken (D-Minn.) tore into his colleague Jeff Sessions (R-Ala.) during Sessions’ confirmation hearing on Tuesday to be the next attorney general, suggesting that Sessions has not honestly portrayed his record on civil rights to the public.

Republican senators and the Trump transition team made a concerted effort at the hearing to portray Sessions as an egalitarian whose reputation as a racist is unearned. But Franken’s pointed questions cast doubt on that narrative.

Franken began by bringing up an interview Sessions gave in 2009, when he became the top Republican on the Senate Judiciary Committee. Sessions, Franken quoted, said at the time, “We’re not going to misrepresent any nominee’s record and we’re not going to lie about it.” Franken then used the next 10 minutes of questioning to suggest that Sessions was actively misrepresenting his own record.

First, Sessions brought up another quote from that same interview in which Sessions claimed to have filed “20 or 30 civil rights cases to desegregate schools” other organizations as a US attorney in Alabama. But in November, Franken continued, Sessions’ office said he had filed “a number” of desegregation cases. Which was it, Franken wanted to know. Sessions acknowledged that the record doesn’t show that there were “20 or 30” and that “the number would be less than that.”

Next, Franken asked Sessions about a piece of his confirmation questionnaire that has come under scrutiny. On the questionnaire, Sessions named four civil rights cases among the 10 most significant cases he had “personally” litigated. But former Justice Department attorneys who oversaw three of those cases challenged Sessions’ portrayal of his involvement, in a Washington Post op-ed earlier this month. They wrote:

We worked in the Justice Department’s Civil Rights Division, which brought those lawsuits; we handled three of the four ourselves. We can state categorically that Sessions had no substantive involvement in any of them. He did what any U.S. attorney would have had to do: He signed his name on the complaint, and we added his name on any motions or briefs. That’s it.

Franken quoted extensively from this article and pressed Sessions on his involvement in the cases. Sessions defended himself by stating that he had cooperated with the Justice Department in bringing these civil rights cases and provided them with office space. He claimed this was more than other prosecutors had done at the time, more than 30 years ago—a low bar for someone claiming to be a civil rights advocate.

The Justice Department “is facing real challenges, whether it’s protecting civil rights or defending national security, and our country needs an attorney general who doesn’t misrepresent or inflate their level of involvement on any given issue,” Franken concluded.