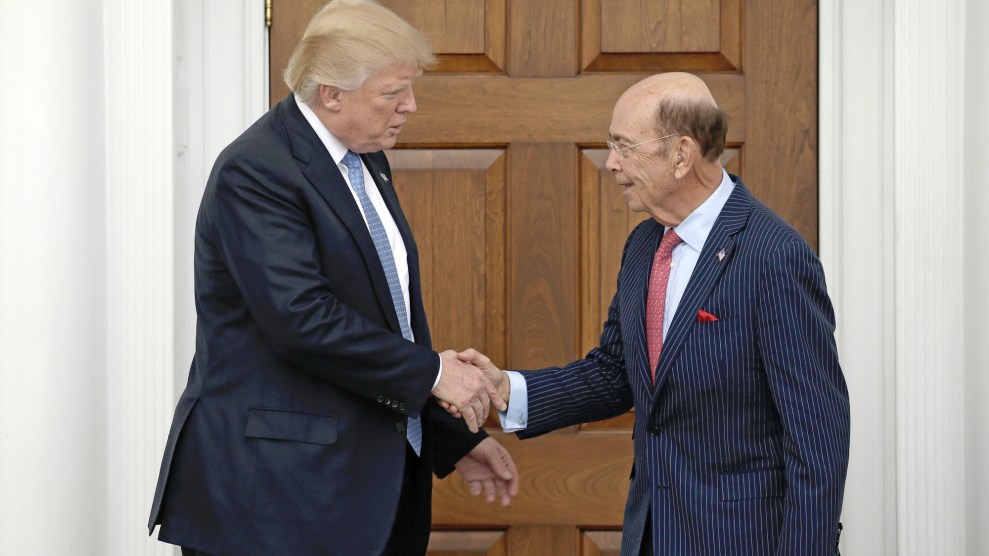 During the presidential campaign, Donald Trump repeatedly cast himself as an anti-Wall Street populist and blasted an international cabal of bankers for supposedly screwing American workers. Yet, since being elected, he has turned to Big Finance titans to run his administration, and one of them—Wilbur Ross, Trump’s pick for secretary of commerce—founded a giant private equity firm that was accused of committing fraud and deceit in a case the firm settled by paying a multimillion-dollar fine.

In 2000, Ross founded WL Ross & Co., a private equity firm that specialized in taking over troubled companies. In August this year, the firm settled a case with the Securities and Exchange Commission regarding the firm not accurately disclosing fees it was charging investors, resulting in them paying excessive fees for nearly a decade. Ross had sold the firm in 2006, but the failure to properly disclose fees began in 2001 and continued until 2011. The settlement was part of a much larger crackdown by the SEC on how private equity firms charged fees to their investors.

According to SEC documents in the case, WL Ross & Co. advised investment funds in exchange for management fees, but those fees were supposed to be offset by special “transaction fees” paid by some of the companies that were being invested in. But millions in those transaction fees were allocated to other funds, and investors ended up overpaying their management fees to WL Ross & Co. The SEC determined the firm had violated the law prohibiting firms from engaging “in any transaction, practice, or course of business which operates as a fraud or deceit upon any client or prospective client.” In August, the firm agreed to pay back $11.9 million in fees and a $2.3 million civil penalty, although it did not admit any wrongdoing.

Under Wilbur Ross’ management, the firm helped engineer the purchase and combining of a number of American steel companies, including the iconic Bethlehem Steel, which Ross united as the International Steel Group. Ross sold the collection of American steel companies to Indian billionaire Lakshmi Mittal, who folded the companies into the international steel conglomerate ArcelorMittal.

Ross, who made his name and billions of dollars as a specialist in buyouts and restructuring troubled and bankrupt companies, has a long history of working with Trump. In the early 1990s when Trump’s Atlantic City casinos were floundering, Trump managed to stave off lenders and keep the businesses afloat with the help of Ross, who at the time ran the Rothschild Inc. investment firm’s bankruptcy practice.