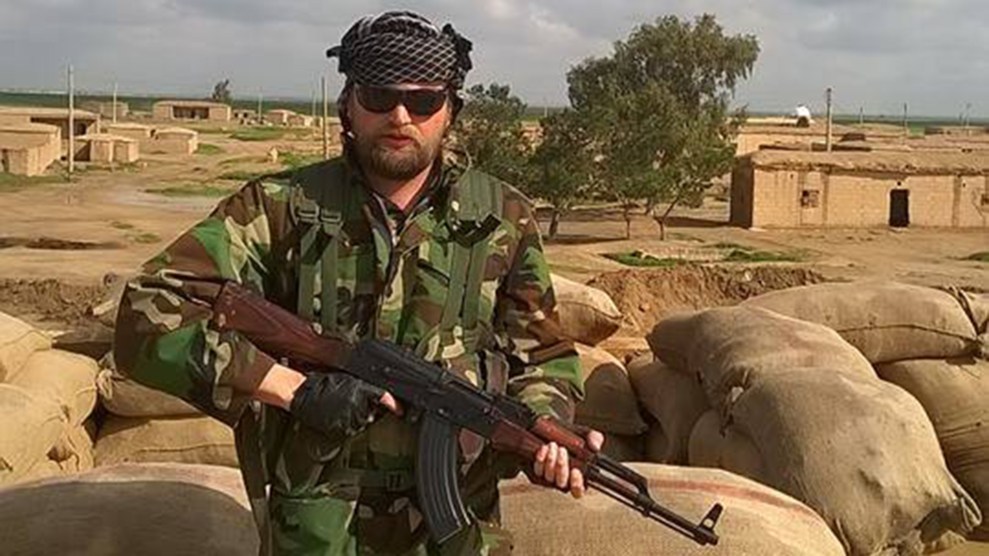 “This reminds me of when I was fighting ISIS,” Robert Amos told me, improbably, one sunny September day as we rode in a white Jeep through the streets of downtown Washington, DC. The vehicle was packed with four elderly Kurdish passengers in sweaters and suit jackets, members of the American Kurdish Information Network, a nonprofit organization. They complained in their native Kurmanji dialect about the broken air conditioner, and Amos occasionally chimed in with phrases that he learned during six months he spent as a soldier with the People’s Protection Units, or YPG, the predominately Kurdish militia that controls a 200-mile stretch of territory in northern Syria known as Rojava.

Amos, who is 30 and Jewish and grew up in West Virginia, has hair the hue of desert sand, and he wore big black granny sunglasses. “We’d always be driving through the desert in cars like this,” he said. “One time, during a battle, ISIS guys came streaming out of a tunnel at the bottom of a hill and I thought we were going to die. My friend kissed me on the cheek and said ‘goodbye.’ I survived, but he didn’t.”

Today Amos is fighting a new war. Since returning home in late 2015, he’s formed the American Veterans of the Kurdish Armed Forces, a group that aims to increase visibility and support for the YPG as well as the approximately 200 Americans who have joined them. The Pentagon has provided Special Forces troops to advise the YPG and airstrikes to assist them on the battlefield. But Amos believes this isn’t enough, and his group has lobbied the Obama administration to provide more military assistance. It now plans to do the same with the incoming Trump administration, whose policy toward the Syrian Kurds remains—like most things Trump-related—wildly unpredictable. “Obama, Trump—none of them know what’s going on over there,” Amos said.

Amos’s inspiration for the group was an incident on August 24, 2016, when Vice President Joe Biden flew to Istanbul, where he and Turkish President Recep Erdogen reprimanded Kurdish fighters for being too effective against ISIS. “Move back across the Euphrates River,” Biden said at a joint press conference, referring to the YPG’s recent capture of Manbij, a strategic city north of Aleppo, from ISIS. (Three Americans died in combat during the two-month battle.) Soon after the meeting, 20 Turkish tanks, accompanied by 1,500 Syrian Islamists and aerial support from the US Air Force, rolled into Rojava. When they clashed with the YPG, the dizzying contradiction of the mission became clear: One US-sponsored force (Turkey and the Syrian rebels) was killing another US-sponsored force (the YPG).

A video, later posted on YouTube, showed a group of Syrian jihadists who’d participated in the Turkish invasion chasing 25 US Army soldiers out of the village of Al-Rai, where the Americans had gone to offer assistance to the pro-Turkey troops. On the tape, the Syrian rebels call the troops who’ve come to help them “dogs and pigs.” “Christians and Americans,” another man shouts, as the Americans flee, “have no place among us!”

Some Middle East experts have expressed outrage at the August invasion and the Obama administration’s support for it. Turkey’s attack on the YPG, said US Army Special Envoy Brett McGurk, was “unacceptable and a source of deep concern.” The incursion would be the beginning of “Erdogen’s Waterloo,” wrote David L. Phillips, a former adviser to President Barack Obama and director of Columbia University’s Institute for the Study of Human Rights, in the Huffington Post. By backing Turkey’s invasion, he believes, the United States wasn’t just facilitating attacks on its own soldiers and allies, but inadvertently enabling jihadists to carry out those attacks. “Slipping into Syria’s quagmire is not in America’s interest,” Phillips wrote. “Nor is being played by Turkey.”

In response, on September 1, Amos put on the olive fatigues he’d worn in Syria and drove six hours from Indiana, where he was living, to Parma, Ohio, to confront Biden. “Why did you tell the YPG to go back?” Amos shouted, as the vice president gave a speech to Hillary Clinton supporters at a union hall. An MSNBC segment called Amos “Biden’s heckler.” In the clip, his voice cracks as he cries out, “My friends died! My American friends!”

“If you’re serious,” Biden says, interrupting his speech, “come back after and talk to me about this. You have my permission.”

“Biden slipped out the back door,” Amos told me as our driver, Jay Kheirabadi, an Iranian Kurd who lives in Maryland, weaved erratically between lanes of traffic, as if dodging land mines. He honked and shouted out the window. “I think I have a perspective the vice president could learn from,” Amos said. “I just want to talk.”

The Jeep parked in front of Biden’s house at Number One Observatory Circle, near Massachusetts Avenue. Separated from the white Queen Anne-style mansion by stands of poplar trees, a steel fence, and a police checkpoint, the five men set up two large signs facing the road. One read, using a somewhat inscrutable reference to Turkey’s support for jihadist groups in Syria, “Joe Biden supports Diet ISIS.” The other read, “Kurds are fighting ISIS tooth and nail. America will you help them?”

Two other YPG veterans had promised to come but never arrived, and the lackluster turnout put Amos in a melancholy mood. Still, the protest’s modesty underscored its message: US support of both Turkish and Kurdish groups who are killing each other in Syria is a danger to American interests, but no one is paying much attention. This point was made dramatically on November 24, when Turkish airstrikes killed the first American YPG volunteer in Syria, an anarchist from California named Michael Israel. Turkish Prime Minister Binali Yildirim said Americans fighting alongside the YPG would be treated as “terrorists…regardless of whether they are members of allied countries”.

A passing car honked. A man gave the middle finger out the top of his convertible. An Italian woman whizzed by on a mountain bike and shouted “Bongiorno!“

The incoming administration’s policy toward the Syrian Kurds is—like most things Trump-related—wildly unpredictable.

When I asked Azad Kobani, a former Syrian parliament member who now lives in Virginia, if American volunteers like Amos were crazy for risking their lives fighting in his home country, he said, “Fighting for democracy is never crazy. Not realizing Turkey doesn’t represent the US’s best interests is what’s crazy.”

Two Secret Service members crossed the street, playing Frogger against traffic. They rubbed their chins and stared down Amos, who is 6 foot 2, a little plump, and who, in his sunglasses and YPG fatigues, appeared a bit deranged. “I fought ISIS,” Amos told the agents. “Biden promised he’d speak with me. He lied.”

“He does that,” one agent said, sarcastically.

“We went over there and fought and died,” Amos said after the agents had left, “and it’s like nobody cares.” Moments later a woman in a black SUV drove by, rolled down her window, and yelled an expletive at Amos. “Well,” he said, sighing, “I guess I need to keep fighting.”

Support for this article was provided by the Pulitzer Center on Crisis Reporting.