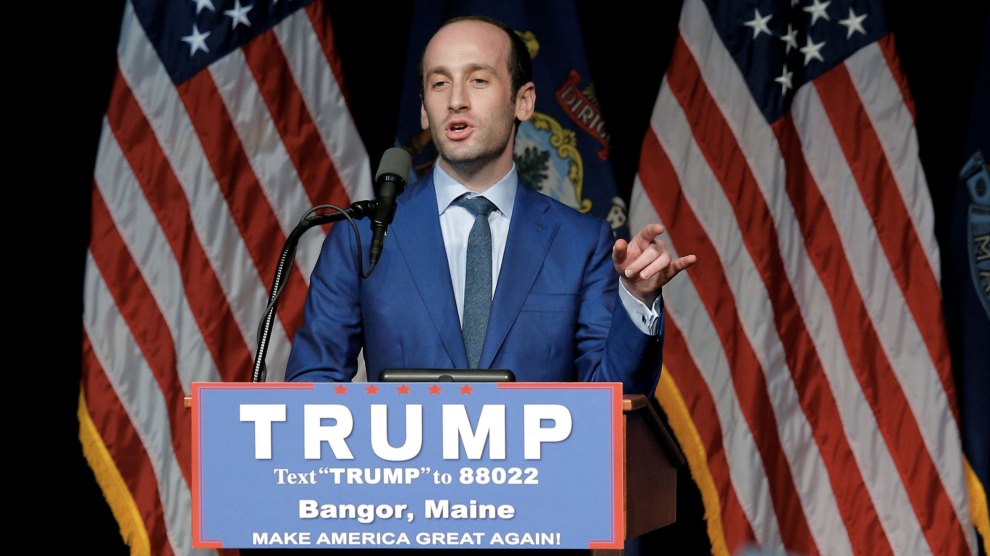 President-elect Donald Trump’s newest pick to be a senior adviser in the White House has long ties to a prominent white nationalist, who sees him as an ally of the movement.

Stephen Miller, a top aide to Trump’s presidential campaign, will serve as a senior White House adviser for policy, Trump’s transition team announced Tuesday. Miller is a former staffer for the nativist Sen. Jeff Sessions (R-Ala.), now Trump’s nominee for attorney general. The announcement of Miller’s new role drew praise from white nationalist leader Richard Spencer. “Stephen is a highly competent and tough individual,” Spencer, who famously coined the term “alt-right” to describe the insurgent right-wing movement that has attracted white nationalists and supremacists, told Mother Jones on Wednesday. “So I have no doubt that he will do a great job.”

Spencer and Miller first came to know each other in the late 2000s as students at Duke University, where they both belonged to the Duke Conservative Union. Miller earned notice for standing up for white lacrosse players falsely accused in 2006 of gang raping a black woman. Spencer also defended the Duke lacrosse players, writing about the case for Pat Buchanan’s American Conservative, which later hired him as an editor.

Spencer told me that at Duke, Miller helped him with fundraising and promotion for an on-campus debate on immigration policy that Spencer organized in 2007, featuring influential white nationalist Peter Brimelow. Another former member of the Duke Conservative Union confirms that Miller and Spencer worked together on the event. At DCU meetings, according to a past president of the group, Miller denounced multiculturalism and expressed concerns that immigrants from non-European countries were not assimilating.

“I knew [Miller] very well when I was at Duke,” Spencer told me when I visited him at his home in Whitefish, Montana, a few weeks before the election. “But I am kind of glad no one’s talked about this, because I don’t want to harm Trump.”

Miller wrote about two dozen columns for the Duke Chronicle, and his articles assailed multiculturalism (which he called “segregation”) and paid family leave (which he said results in men getting laid off). He also denied there was systematic racism (which he dubbed “racial paranoia”).

When contacted by Mother Jones in October, Miller did not respond on the record to specific questions about his activities with the DCU or his views on race and immigration, but he denied ever being close to Spencer. “I have absolutely no relationship with Mr. Spencer,” he said in an email that month. “I completely repudiate his views, and his claims are 100 percent false.”

Before joining the Trump campaign last year, Miller, who is 30, served as Sessions’ chief of communications. “Those who worked with them say that Sessions and Miller had a ‘mind meld,'” Julia Ioffe wrote in a June Politico profile of Miller. Sessions and Miller worked closely in opposing the Supreme Court confirmation of Sonia Sotomayor, who Sessions implied might not be impartial due to her Hispanic heritage. In 2014, after the Senate had passed a bipartisan deal on comprehensive immigration reform, Sessions helped kill it in the House by distributing anti-immigration figures and talking points that were written by Miller.

Spencer told me on Wednesday that Miller “is much tougher than any cuck”—the alt-right smear used for mainstream conservatives. He expressed hope that Miller and Trump would build a border wall, crack down on illegal immigration, and further restrict legal immigration as well. Miller “is not alt-right or a white nationalist or an identitarian,” Spencer said. But he added, “Could Miller and Trump do good things for white Americans? The answer is yes.”