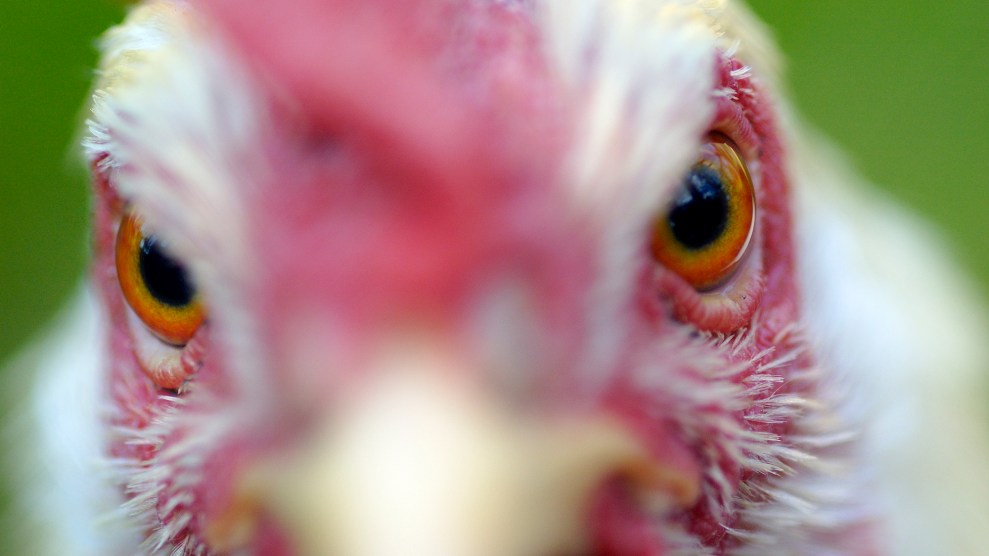 In its waning days, President Barack Obama’s US Department of Agriculture injected an extra dose of drama into President-elect Donald Trump’s chaotic transition of the ag department this week.

Trump’s agricultural advisory committee has been pushing back hard against Heitkamp—and the new poultry rules will likely heighten their fervor.

The USDA issued a blunt assessment of the state of the poultry industry, portraying it as dominated by a handful of chicken processors that “often wield market power” against the farmers who raise the nations’ chickens, “treating them unfairly, suppressing how much they are paid, or pitting them against each other.” The USDA has a point, as Christopher Leonard showed in his excellent 2014 book The Meat Racket (my review here): Farmers own the growing facilities and are responsible for upgrading them according to the companies’ whims, while the companies supply the chicks and the feed and dictate the price farmers are paid.

And it put substance behind the critique, rolling out long-delayed proposed rules designed to give chicken farmers “protections against the most egregious retaliatory practices” used by the big companies. The USDA has been required to release a version of these rules, known as GIPSA, since being charged to do so by the 2008 farm bill, but GOP stalwarts in the US House have been pushing back ever since, using legislative chicanery to block them. This 2015 Washington Monthly piece by Lina Khan details the Obama USDA’s tortured and—until now—failed attempts to release the rules. The farmers’ rights group RAFI has a good summary of what’s in them.

But there’s a catch—the new rules can’t go into effect until a 60-day comment period has passed. And that means it will be up to the Trump USDA to implement and enforce them—or choose not to.

And that plunges GIPSA into the dark heart of Trump’s USDA transition. For weeks, as I reported here, Team Trump has been floating Sen. Heidi Heitkamp (D-N.D.), a moderate Democrat, as his top pick to take the USDA helm. But the motley crew of right-wing farm state pols, agribiz flacks, and donors who make up Trump’s agricultural advisory committee has been pushing back hard against Heitkamp—and the GIPSA rules will likely heighten their fervor. They could spell the end of the Heitkamp trial balloon.

According to the trade journal Agri-Pulse, Heitkamp has “consistently supported” strong GIPSA rules, and in 2014, “she opposed industry efforts to put a provision in the farm bill that would have prohibited USDA from issuing the regulations.” If Heitkamp were to get the job, Agri-Pulse reported, “she would immediately face a confrontation with livestock and poultry groups over the new contracting rules.”

A “74-year-old cowboy hat-wearing Republican,” as Politico puts it, Idaho Gov. Butch Otter is likely to be friendly to meat industry interests if he takes the USDA helm.

Indeed, the meat industry is acting like an aggrieved rooster in response to the GIPSA rules. The National Chicken Chicken Council, a trade group for the big poultry packers, declared that the rules “threaten to upend the structure of the livestock and poultry industries, raise the price of meat/poultry and cost jobs in rural America.” These claims are nonsense. According to the USDA’s economic analysis, the GIPSA rules, once implemented, will likely trigger “price increases of approximately one-hundredth of a cent or less in retail prices for beef, pork, and poultry,” because the “increase in total industry costs [triggered by the GIPSA rules] is very small in relation to overall industry costs.”

Perhaps not coincidentally, the Trump team appears to be moving on from Heitkamp and is now looking at Idaho Gov. Butch Otter, Politico reports. A “74-year-old cowboy hat-wearing Republican,” as Politico puts it, Otter is likely to be friendly to meat industry interests if he takes the USDA helm. Regarding the GIPSA rules, the National Meat Institute quotes Otter like this: “Why are we trying to fix something that isn’t broken? Anybody ought to be free to sell at any price that they want to whomever they want.”

And back in 2014, Otter signed into law one of those infamous “ag gag” bills, championed by Big Ag, that make it a crime to secretly document conditions inside livestock farms. The Idaho law was so overreaching that a federal judge struck it down in 2015, declaring that its only purpose was to “limit and punish those who speak out on topics relating to the agricultural industry, striking at the heart of important First Amendment values.”  While serving in the US House from 2002 to 2006, Otter was a magnet for agribusiness cash. And he’s a former executive at Simplot, the enormous potato-processing company founded by Otter’s ex-wife.

Otter sounds like a man after Trump’s heart—and that of his ag advisers.