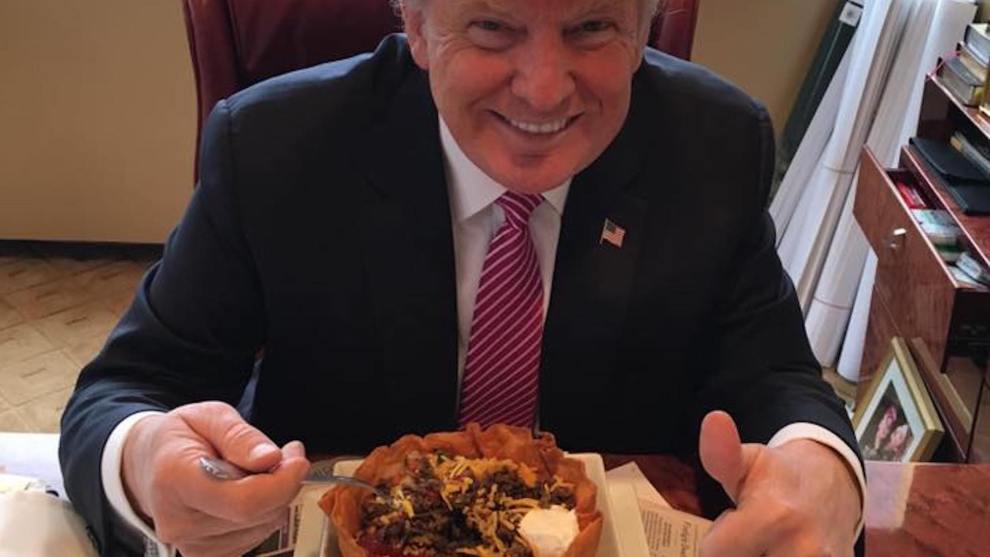 Donald Trump triumphed in politics after a long stint as a reality TV star. And now, as he scrambles to fill his final cabinet slots, the pesident-elect is taking a close look at a Republican who tried his best to move in the opposite direction.

Meet Abel Maldonado, who runs a large farm and a small vineyard on California’s Central Coast and is suddenly in the running for agriculture secretary. Maldonado, the son of Mexican immigrants, has seen his star rise amid speculation that Trump (who constantly lashed out at Mexican and other immigrants during his campaign) “is scrambling to appoint a Hispanic official to serve in his Cabinet,” Politico reports. If Trump fails to include a Latino in his cabinet, he’ll be the first president since Jimmy Carter to do so. There are only four slots left, and Politico adds that “Trump has narrowed his focus to agriculture secretary as the best possibility” for choosing a Latino.

Maldonado is is the latest in a parade of names Team Trump has floated for USDA, a chaotic process that I last updated here. In California politics, Maldonado is seen as a fallen prodigy. His political career peaked in 2009, when then-Governor Arnold Schwarzenegger appointed the then-state senator as lieutenant governor. Less then a year later, Maldonado’s campaign to retain that office failed miserably. Since then, he has made unsuccessful bids for a seat in the US House and governor.

In 2016, Maldonado reportedly pitched himself as a potential reality TV star. Here’s The Sacramento Bee:

At one point, a horse starts relieving itself in Maldonado’s house. “Yeah, Sacramento’s better than this,” a flustered Maldonado mutters as he cleans up.

The Bee reports that the show wasn’t picked up, and I failed to find the video compilation that “rocketed around the Internet,” despite an exhaustive search.

Maldonado met with the president-elect on Wednesday at Trump’s Mar-a-Lago estate. On the surface, Abel would bring a compelling back story. The son of immigrant farm workers from Mexico, he built his family’s plot from “a half acre of strawberries into a farm that now works over 6,000 acres and employs over 250 people and ships produce all over the world,” according to one bio. With his daughter, he runs a winery called Runway Vineyards.

But his ag businesses have had their own troubles. Agro-Jal, Maldanado’s produce farm, “has accumulated dozens of violations from Cal/OSHA since 1990, hundreds of thousands of dollars in tax liens, and multiple citations for exposing workers to toxic pesticides and skirting clean water regulations, government records show,” The Los Angeles Times reported in 2010. Maldonado he was a victim of overzealous regulators, the Times added.

In 2015, the operation was hit with a class-action suit from former workers alleging unpaid minimum and overtime wages, as well as denial of sufficient breaks and meal periods. The suit is ongoing and now in the discovery phase, Allen Hutkin, the San Luis Obispo lawyer who filed the suit on behalf of the workers, told me.

And as Ed Kilgore notes at New York Magazine, Maldonado is generally seen as a moderate Republican—which would put him out of step with the Senate Republicans who will vet the USDA pick.

Meanwhile, Elsa Murano, a former high USDA official and now director of the Norman Borlaug Institute for International Agriculture at Texas A&M, also is under consideration for USDA. Born in Cuba to parents who soon migrated to the United States, she too would qualify as Trump’s only cabinet pick with Hispanic heritage.

As I reported last week, Murano is also a classic example of the revolving door between industry and regulatory agencies. In 2004, Murano stepped down from her post as chief of the USDA division that oversees food safety at the nation’s slaughterhouses. Two years later, she joined the board of directors of pork giant Hormel, a company that runs some of the nation’s largest slaughterhouses. She has held that post ever since, with annual compensation of $237,980 and stock holdings worth $2,484,262 as of 2015.