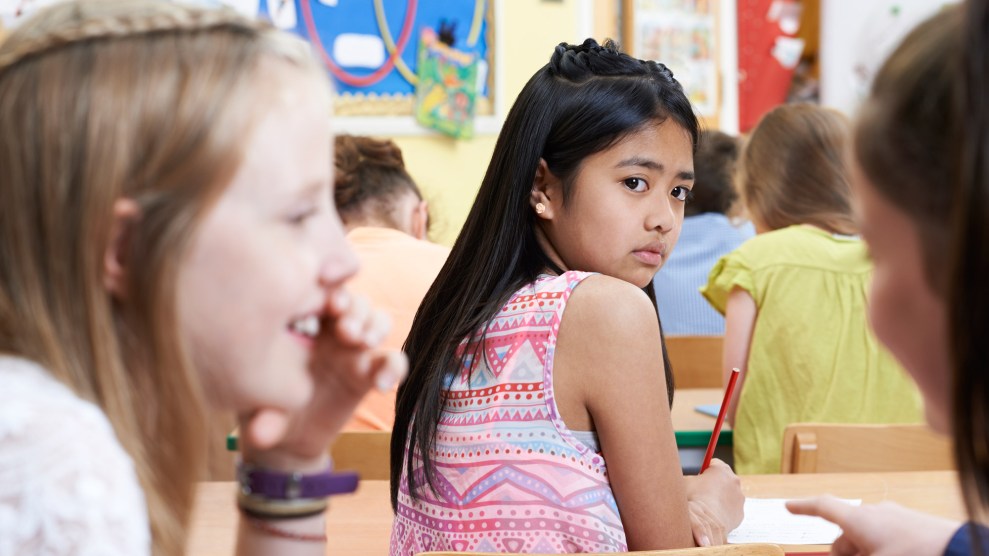 On the morning after Donald Trump won the presidency, Josie Ramon felt nervous about going to school. A week earlier, the seventh-grader had heard a classmate at her middle school in the Detroit suburb of Royal Oak tell racist jokes about blacks, Mexicans, and Asians. A teacher had intervened and sent the student to the principal’s office, and, shortly after, Josie had fled to the bathroom and cried.

Josie’s mother, Alicia, consoled her the morning after the election and told her not to be afraid. But hours later, Josie, who is Mexican American, was in the cafeteria for lunch when a group of students started chanting, “Build a wall! Build a wall! Build a wall!” With tears in her eyes, Josie pulled out her phone and hit record. “I was a bit angry at the people who were doing this, because it was hurtful,” she told me. “I was also a bit sad for them. I felt bad for them because I don’t think they realized what they did was wrong.”

“I never thought my daughter would be afraid, certainly not because we elected a president.”

Soon Josie sent her mom a quick text message with the video. Shocked at what she saw, Alicia drove to the school. “I never thought my daughter would be afraid, certainly not because we elected a president. But to be afraid to go to school, that was disheartening, to say the least,” Alicia told me. “We live in a progressive district. I can only imagine what some of the other students might be going through.”

Throughout the last year, educators have worried about how children would respond to Trump’s racist, sexist, and xenophobic rhetoric on the campaign trail, including degrading comments toward women, his pledge to bar Muslims from entering the country, and his characterization of Mexican immigrants as rapists and criminals. In April, the Southern Poverty Law Center, which monitors hate group activity, surveyed 2,000 teachers nationwide on the effect the election was having on their classrooms. They reported an increase of anti-immigrant and anti-Muslim discourse and harassment against minority students; of the 5,000 survey responses, more than 1,000 cited Trump specifically. (Another 200 comments mentioned Hillary Clinton, Bernie Sanders, and Ted Cruz.) The SPLC gave the outcome a name: “the Trump Effect.”

In the 10 days after Trump was elected, the SPLC tallied 867 election-related instances of harassment and intimidation, 183 of which were reported to have taken place at K-12 schools. And a follow-up survey of more than 10,000 educators found that reports of such harassment had “skyrocketed” since the last survey and that 80 percent of respondents described a heightened anxiety among minority students in the weeks following the election. At Northdale Middle School in Coon Rapids, Minnesota, a Muslim girl was allegedly assaulted, her hijab pulled from her head. (A spokesperson at the Anoka-Hennepin school district told Mother Jones that the student who removed the hijab “was not motivated by a racial/cultural bias” and that it “was not inspired by the recent election.”) Mairah Teli, who teaches at Dacula High School in Georgia, received an anonymous note with the message: “Your head scarf isn’t allowed anymore. Why don’t you tie it around your neck & hang yourself with it.” Swastikas and graffiti were found at Council Rock North High School in Pennsylvania; someone also left a piece of paper with the note “I Love Trump” and a derogatory comment toward gay people. (When asked about hate speech in his November 13 appearance on 60 Minutes, Trump said he was saddened by what had happened and told supporters to “stop it.”)

A survey of more than 10,000 educators found that 80 percent of respondents described a heightened anxiety among minority students in the weeks following the election.

The SPLC report “spoke to the fact that you have this climate in the election from which you cannot escape,” says Dorothy Espelage, an education psychology professor and bullying expert at the University of Florida. “Most of us have CNN feeds constantly in our houses. Kids are bombarded with this message. And we do know that kids’ attitudes toward others—in-group and out-group—is largely influenced by what their parents say.”

Still, Espelage warns that the SPLC’s work is unscientific, and that the data isn’t there to make sweeping generalizations about recent increases in school bullying, Trump-related or not. Nationwide statistics on school discipline won’t be released until early 2017, and those will cover the 2015-16 school year. (Meanwhile, the percentage of teenagers who reported being bullied actually dropped 10 points between 2007 and 2013.) And it can be difficult, she says, to separate election cycle rhetoric from the anti-immigrant language that already existed in many communities across the country. “That’s the problem,” Esepelage says. “You can’t isolate it.”

Robert Faris, a sociology professor at the University of California-Davis who studies bullying, says the example Trump set on the national stage “has given permission and legitimated what was previously considered illegitimate.” Trump’s campaign, he says, has emboldened people with racist and sexist attitudes to act out publicly in ways they didn’t previously. “The Trump campaign, in my view, has not just created more racial resentment, but it’s also given oxygen to the embers of resentment and fanned those flames,” Faris says. “But the embers were already lit.” It’s up to teachers and administrators, he says, to “delegitimize” hate speech and actions right away—especially since research has shown that bullying can lead to long-term mental and social consequences. According to a 2014 Duke University study, kids who are bullied demonstrated a higher risk of anxiety, depression, and suicidal thoughts as adults and experienced health issues (including increased inflammation) in the long term.

Ron Avi Astor, a professor of social work and education at the University of Southern California, argues that the lasting effects of Trump’s incendiary remarks could eventually inspire a shift in what’s considered acceptable behavior for children. “We’ve made a lot of progress around the issues of bullying, around the issues of treating with respect and sexual harassment,” he says. “This may push us back a little bit further.”

“We’ve made a lot of progress around the issues of bullying…This may push us back a little bit further.”

Following the “Build a wall!” chants at Josie Ramon’s middle school, the school deployed counselors and a school safety officer, and officials held meetings with classes to, as Royal Oak Superintendent Shawn Lewis-Lakin put it, “reinforce our school’s strict policies on intimidation, threats, harassment and bullying.” Lewis-Lakin also urged teachers, parents, and students to respond to the incident, and the results of the election, with empathy: “We need to hear each other’s stories, not slogans, we need to work toward understanding, not scoring points, and we need to find a way to move forward that respects and values each and every member of our community.”

A little more than a week later, though, the school faced yet another incident: a student admitted to hanging a noose in a bathroom. (Royal Oak police investigated the incident with school officials, and the student was removed from school “until further notice.”) “At Royal Oak Schools, we will not tolerate intimidation, threats, harassment or bullying,” Lewis-Lakin said in a statement. “We will remind our students that inappropriate words or actions will be taken seriously and carry serious consequences.”

This story has been updated to include the findings of Northdale Middle School’s investigation into the hijab incident.