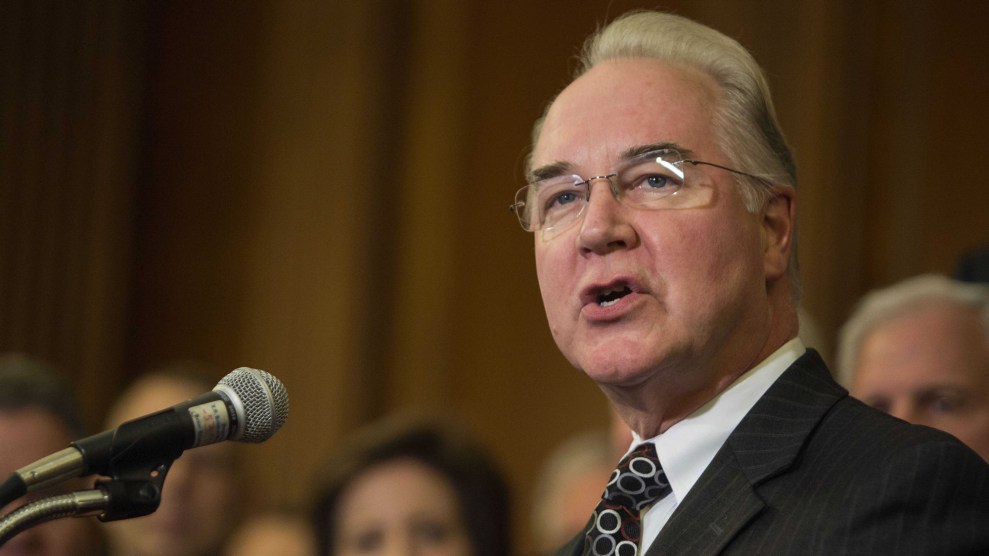 The American Medical Association, the country’s largest professional group of doctors, wasted no time in throwing its support behind Rep. Tom Price (R-Ga.) after he was announced on November 29 as President-elect Donald Trump’s pick to be secretary of health and human services. “His service as a physician, state legislator and member of the U.S. Congress provides a depth of experience to lead HHS,” the AMA said in a press release that same day. “Dr. Price has been a leader in the development of health policies to advance patient choice and market-based solutions as well as reduce excessive regulatory burdens that diminish time devoted to patient care and increase costs.”

It’s not surprising that the organization, which has battled against various health care regulations, would be eager to see Price appointed. The former orthopedic surgeon has long complained that doctors face, as the AMA put it, “excessive regulatory burdens,” and his proposals would lead to increased pay for doctors. But they would also reverse reforms that have kept health care spending in check during Barack Obama’s presidency and could send costs skyrocketing once again.

For all of the controversy over health care under Obama, there has been general agreement on one area of success: Growth in health care spending has slowed. The Affordable Care Act, popularly known as Obamacare, created new schemes for paying doctors and hospitals that helped sharply reduce the annual increase in national health care spending and keep it below pre-recession levels. Both Republicans and Democrats have supported these provisions, which have centered on charging for the overall quality of care rather than for each service performed. But now Price, a longtime booster of freeing doctors from government restrictions, appears eager and able to undo them.

David Cutler, a Harvard professor who served as Obama’s senior health adviser during the 2008 campaign and helped craft the ACA, is worried that the progress on slowing health spending would stall or reverse under Price. “Price has expressed skepticism about many of the payment changes that have been ongoing and have bipartisan support,” he says. “This is quite scary, as they are starting to pay off. He seems to want to go back to the days when price was based on the volume of services provided, not the value. I don’t know if it’s a product of being an [orthopedic] surgeon, where that is how one earned a lot of money. In any case, I don’t think it bodes well for the vast changes in the health care landscape that are taking place.”

Much of the attention paid to Price’s plans for dismantling the ACA has focused on his proposal to undo the expansion of health insurance coverage. In short, Price would wipe away the Medicaid expansion that has given millions of poor people access to health insurance. The effect, as Sarah Kliff explains in Vox, would be to make the individual market more expensive for people who have been sick.

But the ACA wasn’t just an effort to expand health insurance. Until the 2008 recession slowed it, the cost of health care was rising at an alarming rate, accounting for an increasing share of the country’s total spending, and the trend lines projected unsustainable spending levels in the future. The ACA introduced a host of reforms and pilot programs for different schemes to reward doctors based on health outcomes in order to keep spending under control. The exact mechanisms were complex, but the basic idea was simple: The fees charged by US doctors and medical facilities were far higher than worldwide norms, and the best way to slow the growth of health care spending was to keep those pay rates in check.

Despite the hoopla this fall over rising premiums in the ACA marketplaces, the growth in health care spending slowed immensely during the Obama years, before a recent uptick. That growth peaked in 2002, at a 9.6 percent annual rate. During the recession, the rate dropped sharply, to 4.5 percent in 2008. But even as the economy rebounded, health care spending growth continued to decline, dipping to 2.9 percent in 2013—the lowest growth rate in more than half a century. It inched back up again in 2014, and earlier this month the Centers for Medicare & Medicaid Services announced a 5.8 percent growth rate for health spending in 2015—still below pre-recession levels, even though the ACA expanded insurance coverage to 20 million more Americans. A study from the Urban Institute earlier this year found that the amount the United States spent on health care under the ACA was far lower than anticipated—$2.6 trillion lower over five years.

Price has never been shy about his advocacy on behalf of doctors. When he first ran for Congress in 2004, he complained that people who lacked a background in the medical field were setting regulations and policy. Health professionals are by far the largest group funding his congressional career, having donated $3.6 million to his campaigns. The insurance industry is second, with more than $800,000 in donations.

Easing the restrictions doctors face when accepting patients with government-funded health insurance has been a central part of his health care policy proposals. When he reintroduced his Obamacare replacement plan earlier this year, he described it as “one that empowers patients and ensures they and their doctor have the freedom to make health care decisions without bureaucratic interference or influence.”

One of his key pushes over his time in Congress has been “private contracting” that would give Medicare patients access to doctors who don’t normally accept Medicare because of the lower rates it pays. But there’s a catch: The patients must pay extra fees to the doctor, on top of the rate Medicare pays the doctor. That gives doctors a perverse incentive to abandon Medicare so they receive more from those patients than they’d get under Medicare alone. The consequence would be a reduction in Medicare participation among doctors, which would in turn reduce the government’s bargaining power in negotiating prices.

Price’s background as an orthopedic surgeon might be part of the reason he’s disinclined to support payment reforms, says Len Nichols, director of the Center for Health Policy Research and Ethics at George Mason University. Nichols notes that specialists who see patients only for specific problems have different incentives from doctors who see patients repeatedly. “They are almost perfectly tailored for fee-for-service, episodic, fix your knee, they make sure it works, goodbye,” Nichols says. “Because of that, as a class they tend to be rather skeptical of all this bundling, payment reform, incentive stuff, because they look at it like: I have a price for your knee, I fix your knee, then I’m done with you, you’re done with me.”

Price has been harshly critical of the Center for Medicare & Medicaid Innovation, an office created by the ACA to conduct experiments in new ways of compensating doctors that can, if successful, be expanded without congressional approval. Price spearheaded a letter from Republican members of Congress in September demanding that CMMI stop all its mandatory payment reforms. “CMMI has overstepped its authority and there are real-life implications—both medical and constitutional,” Price said at the time. “That’s why we’re demanding CMMI cease all current and future mandatory models.”

Price did join the majority of both Democrats and Republicans in the House voting in favor of the Medicare Access and CHIP Reauthorization Act of 2015, which will eventually require doctors to bill Medicare patients based on quality, rather than quantity, of care. But he’s since sounded a more skeptical note, objecting earlier this year to the Obama administration’s rulemaking language on the bill because it would move doctors away from a fee-for-service model.

“He was a founding member of the tea party caucus,” Nichols says. “Skepticism of government is in his veins. If you have a natural, professional distaste, disinclination, distrust of these payment reform things, and you couple that with they’re coming from government, then it’s a double whammy.”

Price has also proposed some more extreme health care reform ideas, such as privatizing Medicare and turning Medicaid into a block grant program—in effect reducing the amount of money spent on poor people’s health coverage over time. But these large-scale changes would require acts of Congress. Many of the programs for cost control experiments and pilot programs, by contrast, are at the direction of HHS—leaving the prospective secretary in broad control of the way doctors and hospitals are paid.