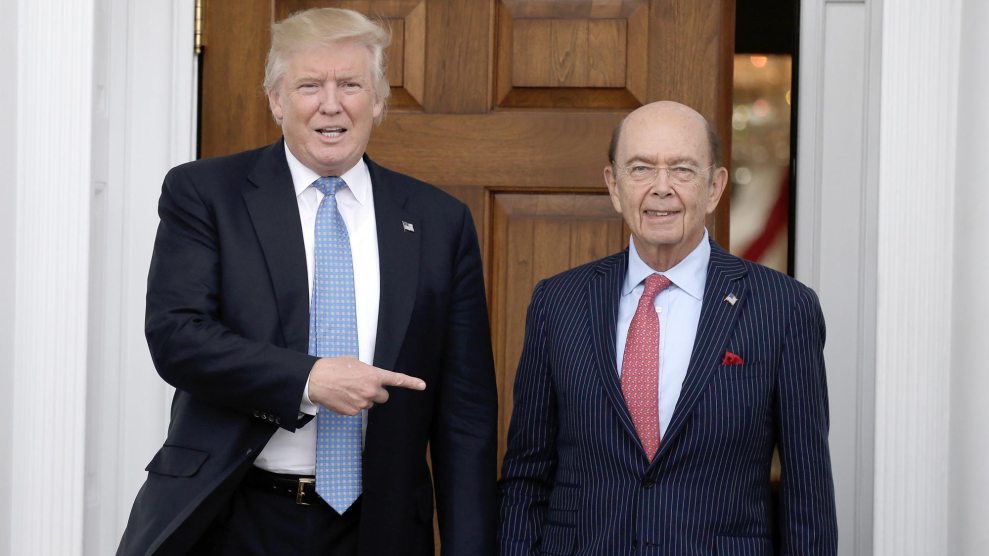 On Wednesday, Donald Trump announced that he’d tapped billionaire investor Wilbur Ross to be his commerce secretary. Ross is known as the “king of bankruptcy,” a moniker he earned thanks to his longtime business of buying troubled companies for cheap, often in manufacturing industries like steel or coal, and then restructuring them to turn a profit. “Wilbur Ross is a champion of American manufacturing and knows how to help companies succeed,” Trump said in a statement announcing his nomination of Ross.

But Trump neglected to mention one of Ross’ other credentials: He’s connected to some of the world’s most powerful investors and businessman via a secret Wall Street fraternity called Kappa Beta Phi.

In January 2012, New York Times reporter Kevin Roose snuck into the society’s annual black-tie induction ceremony, which was led by Ross, who at the time was the fraternity’s “Grand Swipe.” The fraternity, Roose wrote in his 2014 book, Young Money, was founded at the beginning of the Great Depression, and since then the induction ceremony had been subject to the utmost secrecy. The group’s mantra, according to Roose, is “What happens at the St. Regis stays at the St. Regis.”

It’s not hard to see why. At the 2012 event, Roose witnessed outlandish behavior by Ross and other financial tycoons that demonstrated vulgarity, greed, and a Wall Street callousness toward the nonwealthy masses. Some attendees made homophobic, racist, and sexist jabs about the likes of Hillary Clinton and former Rep. Barney Frank of Massachusetts. Others joked about the financial crisis. One even wore a Confederate flag hat. And when Roose was outed as a reporter partway through the night, Ross himself took Roose into the St. Regis hotel’s lobby and tried to convince him not to print the story by offering himself up as an “anytime” source for Roose’s future reporting.

While leading the event, Ross wore purple velvet moccasins embroidered with the fraternity’s Greek letters. The group’s name is an inversion of the college honor society Phi Beta Kappa, whose ruffled-sleeve logo, Ross said on the ballroom stage, is a “tacit confession of homosexuality.” The main event of the night was the induction of 21 “neophytes” into the fraternity. Roose described what happened when the inductees, who were required to dress in drag costumes that included leotards and sequined skirts, took the stage:

Paul Queally, a private-equity executive with Welsh, Carson, Anderson, & Stowe, told off-color jokes to Ted Virtue, another private-equity bigwig with MidOcean Partners. The jokes ranged from unfunny and sexist (Q: “What’s the biggest difference between Hillary Clinton and a catfish?” A: “One has whiskers and stinks, and the other is a fish”) to unfunny and homophobic (Q: “What’s the biggest difference between Barney Frank and a Fenway Frank?” A: “Barney Frank comes in different-size buns”)…

Warren Stevens, an investment banking CEO, took the stage in a Confederate flag hat and sang a song about the financial crisis, set to the tune of “Dixie.” (“In Wall Street land we’ll take our stand, said Morgan and Goldman. But first we better get some loans, so quick, get to the Fed, man.”)

The performances continued, including a parody of ABBA’s “Dancing Queen” called “Bailout King” and a comedic skit depicting a debate between the 99 percent and the 1 percent. When Roose pulled out his phone to record part of the inductees’ performance, he caught the eye of one of his billionaire table-mates, Michael Novogratz. He angrily asked Roose who he was, which left Roose with no choice but to disclose that he was a reporter. Novogratz grabbed Roose and tried to pull away his cellphone. That’s when Ross stepped in to attempt damage control:

Once we made it to the lobby, Ross and Lebenthal reassured me that what I’d just seen wasn’t really a group of wealthy and powerful financiers making homophobic jokes, making light of the financial crisis, and bragging about their business conquests at Main Street’s expense. No, it was just a group of friends who came together to roast each other in a benign and self-deprecating manner. Nothing to see here.

But the extent of their worry wasn’t made clear until Ross offered himself up as a source for future stories in exchange for my cooperation.

“I’ll pick up the phone anytime, get you any help you need,” he said.