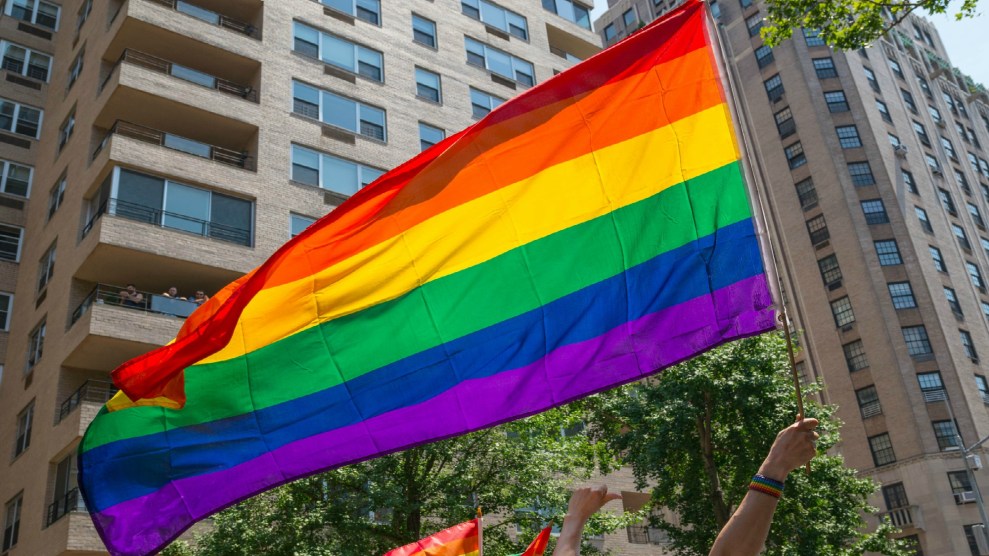 In 2016, state legislatures across the country proposed more anti-LGBT measures than they had in almost a decade, and activists anticipate more of the same in 2017. There was some good news last year: There was a dramatic jump in proposed pro-LGBT rights bills. And in North Carolina, Gov. Pat McCrory lost his reelection bid, and his defeat was seen as a victory for opponents of the LGBT discrimination legislation that he’d championed. As the Human Rights Campaign, the country’s largest LGBT advocacy group, and other allies evaluate the wins and losses from this year, they hope their forward momentum can overpower what is likely to be another year of battling discriminatory legislation.

In North Carolina, the governor paid the the political price of supporting laws that discriminate against gay and transgender citizens. McCrory was a vocal and powerful supporter of HB2, the embattled law that removed protections based on gender identity and sexual orientation and forced trans people to use public bathrooms that correspond with their sex at birth instead of their gender identity. Almost immediately after signing the bill into law, McCrory faced an onslaught of opposition from activists, business, and, eventually, voters. The NCAA announced it would pull its championship games from the state; Bruce Springsteen and other stars canceled shows; PayPal, Deutsche Bank, and other businesses decided not to expand in the state, costing North Carolina millions of dollars.

On election night, McCrory was defeated in a tight race by the state attorney general, Roy Cooper. But the governor contested the outcome—claiming voter fraud and demanding a recount before finally conceding in early December.

A recent study by the Human Rights Campaign shows how toxic HB2 was to McCrory’s reelection campaign. HRC and Equality NC, a state-level LGBT rights organization, surveyed 500 people in North Carolina before the election and found 62 percent of voters opposed the bill, and 57 percent said it was their main reason for voting against him—17 percent higher than any other issue. RealClearPolitics polls show the race was tight through the summer, but by the fall Cooper had a sizable lead of around 7 points. Monmouth University polling of North Carolina residents from August found 70 percent thought HB2 hurt the state’s image nationally, and only 9 percent thought it was beneficial. Lynne Bowman of the Human Rights Campaign says the opposition to McCrory was the result of individuals who took issue with the bill and didn’t need to be mobilized by an advocacy group.

“Businesses came out against the legislation because businesses knew that it was the wrong thing to do,” Bowman notes.

“These bills are not only bad policy,” Lorenz said, but “bad politics.”

The response to HB2 was not strictly partisan. Donald Trump carried North Carolina by roughly 4 points. But HRC communications director Brandon Lorenz says voters on both sides of the aisle supported equality for the LGBT community.

Bowman explains that since the legislation passed in March, legislators and governors all over the country “have been watching what’s happened in North Carolina” and calculating the political cost to McCrory. She says advocates in other states—Equality Texas, for example—are already pointing to North Carolina as a cautionary tale for their own lawmakers foreshadowing what happens when they support discriminatory laws.

“These bills are not only bad policy,” Lorenz said, but “bad politics.”

Republican governors in South Dakota and Georgia seem to know this. They vetoed discriminatory bills this year and saw their approval ratings rise—South Dakota’s Gov. Dennis Daugaard is the most popular governor in the country according to Morning Consult, a polling and media organization.

While the 2015 legalization of same-sex marriage in the Supreme Court’s Obergefell v. Hodges decision was a high point in gay rights, there are a number of proposals for 2017 whose intent is to roll them back. During a recent press call, the ACLU predicted a crop of “religious exemption” bills in the near future, laws that allow businesses and service providers to use their religious beliefs as justification for refusing service to a member of the LGBT community. “A Trump administration will embolden some of the folks in state legislatures who already wish to move legislation that harms the LGBT community,” Bowman says. “That piece is very concerning.”

Lawmakers in a number of states have already pre-filed discriminatory bills for 2017. Here are some of them:

Alabama: HB24 would allow adoption agencies and foster care facilities to refuse, on the grounds of religious objections, to place kids in certain homes. The bill would also allow them to refuse to refer children to other agencies.

Missouri: HB205 would let government and religious officials refuse to perform marriages because of religious objections. SB98 aims to make transgender kids in school use an individual bathroom instead of the bathroom that matches their gender identity.

Tennessee: SB1 would give mental health counselors the ability to refuse service to LGBT patients on religious grounds.

The ACLU plans to keep an updated list of discriminatory bills on their website throughout the year. 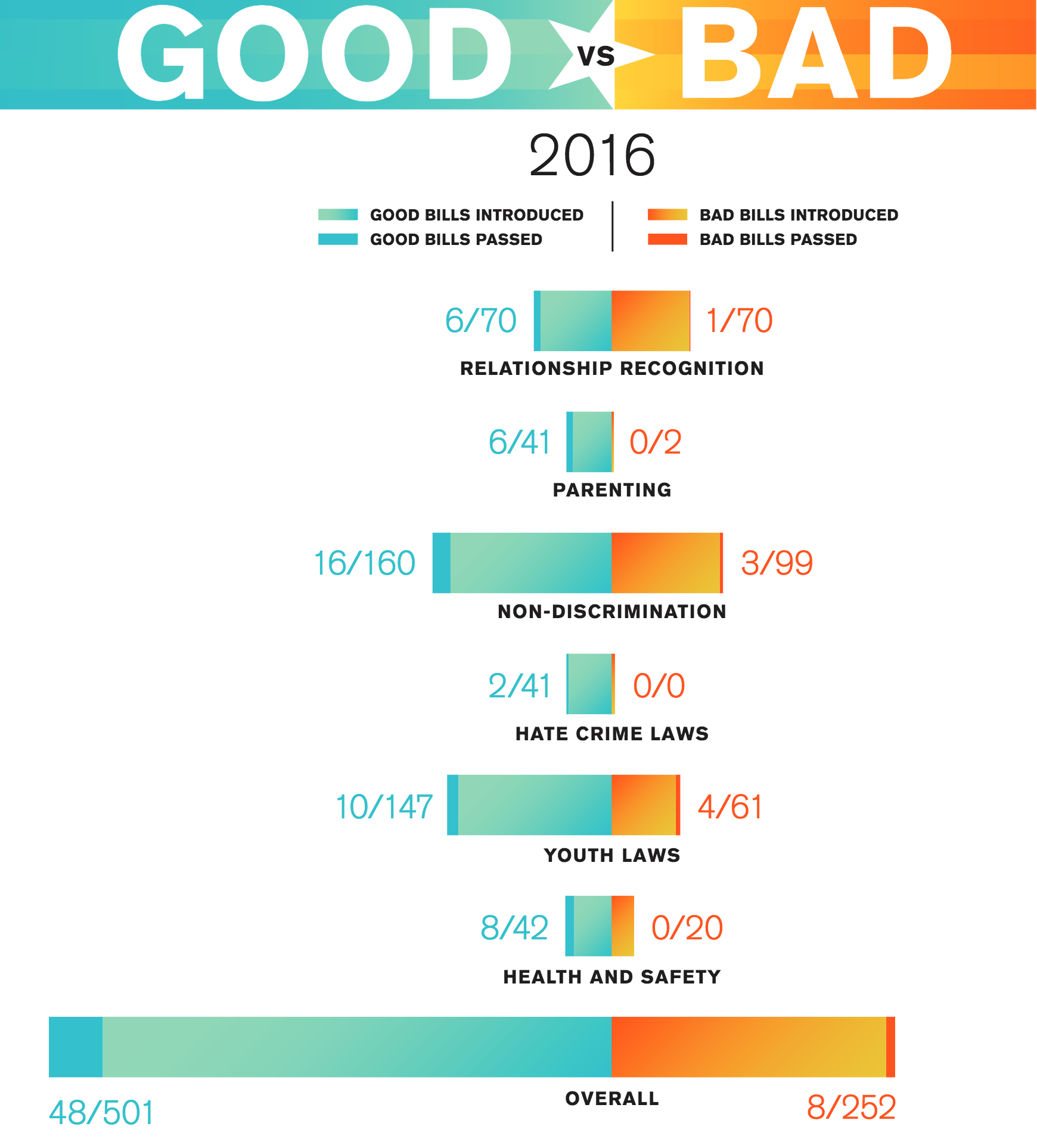 In Congress, the First Amendment Defense Act, which allows refusal of service on a religious basis, and the Russell Amendment, which would allow federal contractors to do the same with hiring, are likely to be revived, this time with potentially greater chances for success.

Republican lawmakers, who control both houses of Congress and have President-elect Trump’s assurance he’ll sign the bill, expect FADA to pass, inviting “widespread, devastating discrimination against LGBT people,” Jennifer Pizer of Lambda Legal Defense Fund told NBC. “This proposed new law violates both Equal Protection and the Establishment Clause by elevating one set of religious beliefs above others.”

Rep. Steve Russell (R-Okla.), the sponsor of the amendment, said Trump has given him “very good assurances” that it will come up in 2017. Other discriminatory riders could also be attached to must-pass bills, such as defense spending or budget proposals.

Supporters of LGBT rights will renew efforts to pass the Equality Act, which would prevent discrimination based on sexual orientation or gender identity at the federal level. It was originally introduced in the summer of 2015 but never brought to a vote. Rep. David Cicilline (D-R.I.) and Sen. Jeff Merkley (D-Ore.) plan to reintroduce the legislation this upcoming session. With Republicans controlling both houses of Congress, its passage is unlikely.

“The American people are firmly on our side,” a spokesman for Merkley said in a statement. “A large majority saying that they not only believe that full nondiscrimination protection is the right thing to do, they believe it is already law.”

Trump describes himself as a defender of LGBT rights. In his convention speech, he spoke about the mass shooting at the Pulse nightclub and said, as president, he would “protect our LGBTQ citizens from the violence and oppression of a hateful foreign ideology.” But many of his Cabinet picks have been vocally anti-gay throughout their careers. Republican Sen. Jeff Sessions of Alabama, Trump’s pick for attorney general, co-sponsored the State Marriage Defense Act in 2014, which would have allowed states to define marriage as only between a man and a woman, even after the Defense of Marriage Act was overturned by the Supreme Court. Tom Price, who was tapped to head the Department of Health and Human Services, called the federal recommendations for protecting trans people issued to schools and health care providers an “absurd” overreach of power. The Human Rights Campaign has given him a zero out of 100 on its annual Support of Equality scorecard for six years.

“The way we’re going to keep moving forward is for people to keep engaging, to keep fighting, to keep demanding justice,” said David Stacy, a government affairs director for the Human Rights Campaign. “I know we can get there sooner rather than later, but the only way that’s going to happen is for people to continue to demand it.”