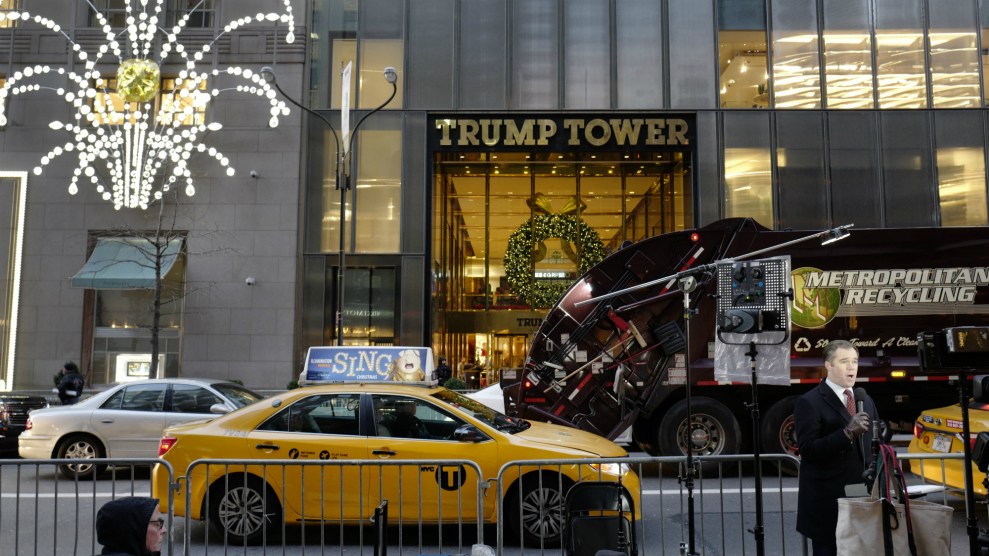 Coming to an auction block near you: Donald Trump’s $100 million mortgage on Trump Tower?

As Mother Jones has detailed for months, Trump owes hundreds of millions of dollars to a variety of lenders, giving his bankers a huge amount of potential leverage over the man who will soon occupy the most powerful office in the world. Already there are concerns about Trump’s biggest lender, the troubled Deutsche Bank, which he owes at least $364 million. On Friday, Reuters reported that his second-biggest lender, a small Wall Street firm called Ladder Capital Strategies, may be putting itself up for sale to the highest bidder. Public records show Trump owes the firm at least $282 million, on four lines of credit. This means that other big money players—Wall Street firms, American banks, overseas banks, financial institutions partly owned by foreign governments—could move to buy up the debts of a US president and create a host of conflicts of interest.

Ladder Capital holds mortgages on Trump Tower and 40 Wall Street, worth $100 million and $160 million respectively, and two smaller Trump properties in New York City. All the loans Trump has taken out since 2012 have been from either Deutsche Bank and Ladder Capital. That includes his most recent loan, a $7 million mortgage from Ladder Capital that Trump took out on three condo units in the Trump International Hotel Tower on New York City’s Columbus Circle. That loan was taken out in July, weeks after Trump’s most recent personal financial disclosure was filed.

Reuters reported that Ladder Capital is considering a sale and has hired Citibank to help manage the deal. Reuters cited sources who said the bank was looking at a sale as it “grapples with new regulations making selling on mortgages more difficult.” The firm’s primary business model is to package the loans it issues and sell them to other investors. Recent Securities and Exchange Commission filings show Ladder Capital has packaged the Trump International Hotel Tower mortgage as part of a large sale of mortgages. Despite this, on Trump’s personal financial disclosures, Ladder Capital is still listed as the lender Trump owes the money to.

It’s not immediately clear how a potential sale of Ladder Capital might affect Trump’s loans. But it raises the specter that some of Trump’s biggest loans will be available for anyone to purchase.

Between Deutsche Bank and Ladder Capital, Trump owes at least $646 million, and he has seven other loans listed on his financial disclosure form that could be worth another $125 million. Additionally, a real estate partnership Trump participates in borrowed $950 million from a group of lenders that includes the state-owned Bank of China. Trump’s involvement in that loan may violate the Constitution’s emoluments clause, which forbids top government officials from accepting financial benefits from a foreign government. The possibility that a foreign government could purchase Ladder Capital and its portfolio of loans, including Trump’s, would cause other complications for Trump and the conflicts of interest already saddling his soon-to-be presidency.