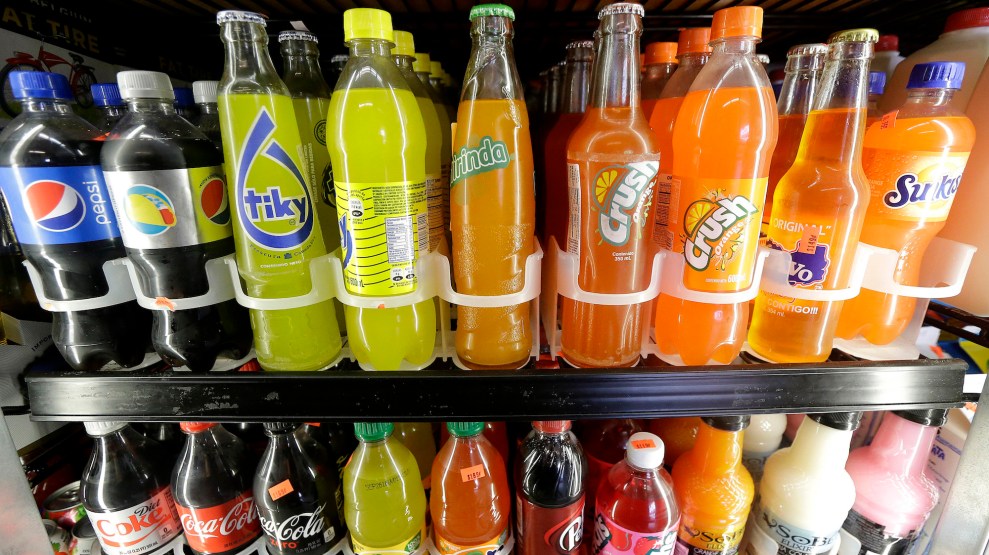 Donald Trump is the president-elect. Go here, here, and here for a look into the murk of his ag policy agenda. Trump won big in rural areas—here was my attempt to reckon with why farmers supported him so broadly.

Some crucial state and local food policy initiatives were decided as well. Here’s a rundown.

• Soda taxes in California and Colorado. Before Tuesday, just two US cities—Berkeley, California, and Philadelphia—imposed taxes on sugary beverages. That has changed: Voters in three Bay Area cities—San Francisco, Oakland, and Albany—all passed ballot measures that would put them in line with Berkeley in charging a 1-cent-per-ounce sugary-drink tax. And Boulder, Colorado, approved a ballot measure that would up the ante: a 2-cent-per-ounce levy won as well.

The Bay Area emerged as a battleground between public health advocates eager to marginalize soda and giant beverage companies keen to protect their profits. The industry’s fear, and the advocates’ hope, is that these ballot efforts, if successful, will spread to other cities. According to Politico‘s Helena Bottemiller Evich, the American Beverage Association pumped almost $30 million into anti-tax campaigns in the region and has even hired the same media firm that ran the successful “Brexit” campaign in the United Kingdom. Meanwhile, she adds, proponents, led by billionaire and former New York City Mayor Mike Bloomberg, have donated $20 million.

That’s a lot of dollars for three cities with a combined population of 1.2 million—”that the campaigns could have given $40 to each resident across the three cities considering taxes,” calculates Bottemiller Evich.

The initiatives are structured as a tax on beverage distributors, which are than expected to pass on the penny-per-ounce penalty to retailers, who are then expected to pass it on to consumers. The industry is using that structure to call the proposals “grocery taxes,” claiming that retailers will use them as an excuse to jack up prices across the board, negating their impact on soda sales. Here’s a typical ad:

But the soda taxes that have been implemented so far have effectively targeted sugary beverages, research shows. Berkeley’s soda tax—the nation’s first, passed in a bitterly contested 2014 ballot initiative, is structured the same way. In a peer-reviewed October 2016 study published in The American Journal of Public Health, a team of University of California researchers compared soda consumption in low-income neighborhoods of Berkeley during the four months after the tax went into effect to soda consumption in similar areas in Oakland and San Francisco. The result: Soda consumption dropped 21 percent in Berkeley and rose 4 percent in the tax-free areas.

Meanwhile, a study published November 1 in the peer-reviewed journal Plos Medicine calculated the benefits of a soda tax imposed in Mexico in 2014. There, soda consumption has fallen around 10 percent since the tax emerged. If Mexican consumers maintain that lower level of soda intake over the next decade, the study calculated, the tax will prevent 189,300 new cases of Type 2 diabetes, 20,400 strokes and heart attacks, and 18,900 deaths among adults 35 to 94 years old, while saving $983 million dollars in health care costs through diabetes prevention alone.

Now that Tuesday’s initiatives succeeded, other cities might follow suit. Increasingly, states and municipalities are looking at sugar-sweetened beverages the same way they eyed tobacco in the 1980s and 1990s—as a source of both harm reduction and additional tax revenue, reports Bloomberg BNA. The next battleground: Cook County, home of Chicago. There, the county’s board of commissioners is mulling a 1-cent-per-ounce tax on sugary drinks. Mike Bloomberg, that anti-soda warrior, recently launched a $1 million ad blitz, reports Crain’s Chicago Business. No date for a vote has been set.

• A “right to farm” proposal in Oklahoma. In certain regions—the panhandle and the border with Arkansas—Oklahoma has a heavy concentration of large-scale, confined animal operations—see Food and Water Watch’s “Factory Farm Map” for the state. The state shot down a measure called State Question 777,  informally known as a “right to farm” law, which would have restricted efforts by the state or localities to regulate such operations. It would have amended the state constitution, declaring:

The Legislature shall pass no law which abridges the right of citizens and lawful residents of Oklahoma to employ agricultural technology and livestock production and ranching practices without a compelling state interest.

According to the latest figures, the initiative’s supporters, led by the Oklahoma Farm Bureau Mutual Insurance Co. and the Oklahoma Pork Council,  spent about $1 million. Opponents, including the Humane Society of the US, also spent around $1 million.

If it passed, Oklahoma would have joined North Dakota and Missouri as the only states to have such language inserted into their constitutions. According to a recent analysis from NPR’s State Impact project, those states’ “right to farm” initiatives haven’t changed things much—with one surprising exception in Missouri:

“The majority of the times it’s been invoked in court is for marijuana farm operations,” Kristofor Husted, a reporter for Harvest Public Media in Missouri, says. “So people who have been caught growing anywhere between a couple of plants and a couple of hundred plants have tried to use this argument to defend why they are growing marijuana.”

• A cage-free hen and pig proposal in Massachusetts. Meanwhile, in a state with very little factory-scale livestock farming to speak of, voters passed a measure known as Question 3 that bans the practice of holding egg-laying hens, pigs, and calves raised for veal in confined spaces that “prevent the animal from lying down, standing up, fully extending its limbs, or turning around freely”—and also, crucially, that forbids businesses from selling eggs, pork, and veal from animals raised under those conditions.

The bill requires the state’s food retailers to sell only cage-free eggs and pork from operations that don’t confine sows in tight spaces. Without the bit about selling, Question 3 would have scant impact. According to the Beacon Hill Patch, only one operation in the state would be affected: “Third-generation, family-run Diemand Farm raises chickens for eggs and meat, turkeys for Thanksgiving and a small herd of beef cattle.” (It would have to downsize its egg operation, the Patch reports.)

And for once, according to Masslive, animal welfare advocates outspent industrial ag interests: “The pro-ballot question Citizens for Farm Animal Protection has $2.6 million, dwarfing the $302,000 from the ballot question opponents, Citizens Against Food Tax Injustice.”