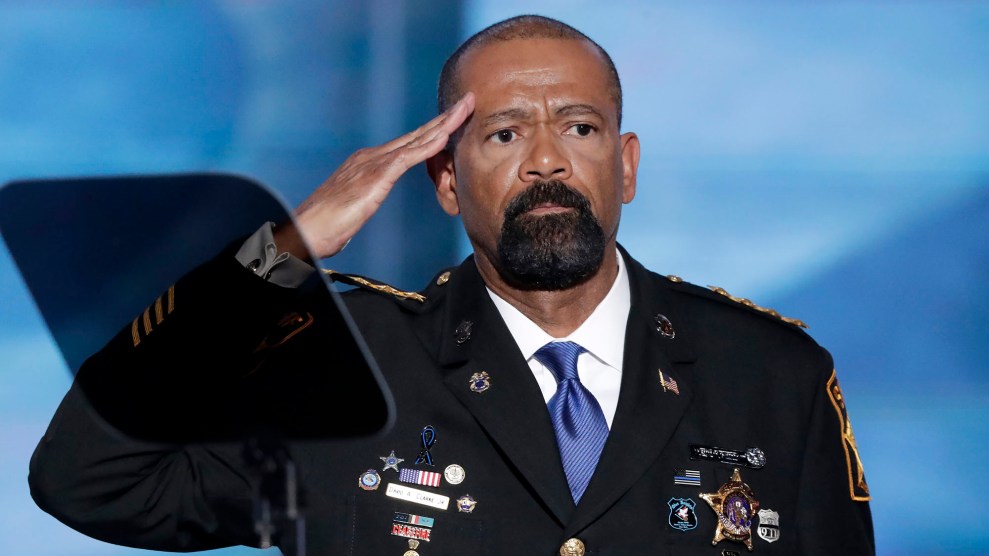 Donald Trump was scheduled to meet Monday with Milwaukee County Sheriff David Clarke Jr., a Trump supporter and surrogate during the campaign who is now reportedly being considered to head the Department of Homeland Security. Clarke is known for his extreme views on policing—including his conviction that there is a war on cops but no police brutality—and for his attacks on Black Lives Matter. One of his most out-there positions: suspend the constitutional rights of up to a million people, and hold them indefinitely at the US prison in Guantanamo Bay, Cuba.

Clarke’s extremist approach to homeland security is no secret. In his upcoming memoir, Cop Under Fire: Moving Beyond Hashtags of Race, Crime and Politics for a Better America, he advocates treating American citizens suspected of terrorism as “enemy combatants,” questioning them without an attorney, and holding them indefinitely, the Milwaukee Journal Sentinel reported. Their cases would be handled by a military tribunal rather than a traditional court.

But a year ago, Clarke went further and called for rounding up Americans who sympathize with terrorists and shipping them to an offshore prison. During a December 2015 segment of his show, The People’s Sheriff, on Glenn Beck’s TheBlaze radio network, Clarke suggested that any person who posts pro-terrorist sentiments on social media be arrested, deprived of the constitutional protection against unlawful imprisonment (known as habeas corpus), and sent to Guantanamo Bay indefinitely. He estimated the number of people who could be imprisoned under his proposal could reach 1 million. Presumably, this would include American citizens. (The Democratic research group American Bridge caught Clarke proposing this idea.)

“I suggest that our commander in chief ought to utilize Article I, Section 9 and take all of these individuals that are suspected, these ones on the internet spewing jihadi rhetoric…to scoop them up, charge them with treason and, under habeas corpus, detain them indefinitely at Gitmo,” Clarke said.

Article 1, Section 9 of the Constitution allows the president to suspend the writ of habeas corpus only “when in cases of rebellion or invasion the public safety may require it.” Clarke added that locking up suspected terrorists in American prisons and jails would turn those facilities into “terrorist recruitment camps.” That’s why these people would have to be packed off to Guantanamo.

“We have no idea how many people out there have pledged allegiance or are supporting ISIS, giving aid and comfort, but I would suggest hundreds of thousands, I would suggest maybe a million,” Clarke said. “It’s just a guess. And then you take the known terrorists that are here, and you think we’re going to arrest all these people and put them in jails and then sentence them to prison? It’s idiotic. [Take them to] Gitmo and hold them indefinitely under a suspension of habeas corpus. We’re at war. This is a time of war. Bold and aggressive action is needed.”

Clarke is prone to exaggerations and extreme talk. Last year, for example, he predicted on Twitter that “before long, Black Lies [sic] Matter will join forces with ISIS to being [sic] down our legal constituted republic. You heard it first here.”

It’s unclear what kind of comment or act would land an American citizen indefinitely in Guantanamo under Clarke’s plan. In the radio segment, he said he was not suggesting indefinite detention for “some innocuous statement, I’m not going to go that far.” He pointed to “the woman out in San Bernardino” as an example, referring to the female shooter in the terrorist attack in San Bernardino, California, who pledged allegiance to ISIS on Facebook shortly before murdering 14 people. “That’s beyond the pale,” he said. But he also said anyone who has “pledged allegiance or are supporting ISIS, giving aid and comfort” would qualify. He did not say how tweets and Facebook posts would be policed or how 1 million people would be arrested and incarcerated in a prison that has up to now held fewer than 800 prisoners.

Listen to the full episode here: