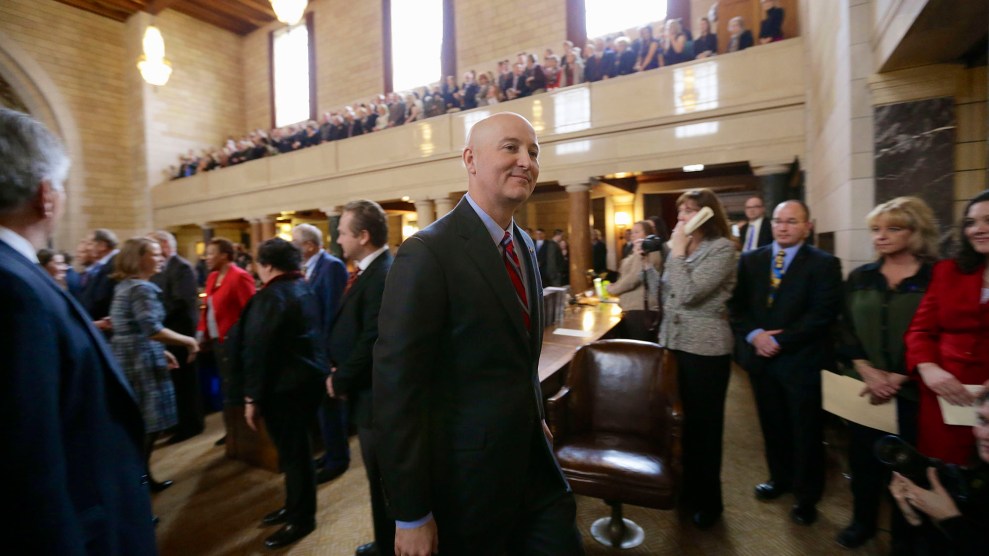 Gov. Pete Ricketts with members of the Nebraska state Legislature after his swearing-in in January 2015Nati Harnik/AP

On May 20, 2015, the Nebraska state Legislature voted to repeal the state’s death penalty. When the Republican governor, Pete Ricketts, vetoed the legislation six days later, the Legislature overrode his veto. It was an extraordinary move, making Nebraska the first solidly conservative state in more than 40 years to end the death penalty.

But the victory for death penalty opponents was short-lived. Having failed in his role as governor to protect the death penalty, Ricketts worked to reinstate it in a different capacity: as a man of deep pockets. Ricketts and his billionaire father, Republican megadonor Joe Ricketts, spent $300,000 on an effort to collect enough signatures to put the death penalty question to voters, in the form of a referendum on November 8. The governor donated another $100,000 this fall to fund a campaign to sway voters to reinstate the death penalty.

“It’s pretty unusual to have a governor who would lose an initiative through the process then try to reverse that process outside of the role of the governor with his own money,” says state Sen. Colby Coash, a conservative Republican and a leader of the anti-death-penalty effort. “Pretty unprecedented.”

Ricketts’ personal funding of the pro-death-penalty campaign has raised questions about the separation of powers in the state, but also about his political motives. The death penalty is an odd issue for Ricketts to stake so much on because, at least in Nebraska, it’s largely symbolic. The state has not carried out an execution in nearly two decades—and critics believe it will not execute anyone in the foreseeable future because the state is unable to obtain the necessary drugs. (Ricketts’ administration even tried, but failed, to obtain execution drugs illegally from India.)

It’s possible that the governor simply feels passionately about the death penalty, which he has long supported. But Ricketts’ critics think he’s using the death penalty to achieve a different objective: consolidating his own power. Ricketts, they say, wanted the death penalty on the ballot in November as a wedge issue to unseat lawmakers who have defied him over the past year. If Ricketts plays his cards right, he could enter the last two years of his first term as a much more powerful governor. From there, he could run for the US Senate—for which he ran unsuccessfully in 2006—or even the White House. “Certainly he sees himself with a future,” says Paul Landow, a professor at the University of Nebraska-Omaha who specializes in state-level politics. “A national future.”

Ricketts, his critics say, wanted the death penalty on the ballot in November as a wedge issue to unseat lawmakers who have defied him over the past year.

Within a few months of becoming governor in January 2015, Ricketts was clashing with the Legislature—and losing. The first showdown came over a bill to raise the gas tax to pay for repairs to roads and bridges. Ricketts vetoed the 6-cent-per-gallon hike, and the Legislature overrode his veto. Less than two weeks later, the Legislature overrode another veto, this time over the death penalty. The very next day brought a third override, over a bill to allow driver’s licenses for young immigrants who were granted temporary legal status under President Barack Obama’s 2012 executive action to help children of undocumented immigrants. A year later, the Legislature would override Ricketts’ veto of a bill permitting these same immigrants to obtain professional and commercial licenses.

Ricketts has made no secret of his anger at the legislators who voted against him on those measures. At the state Republican Party convention this spring, he read aloud the names of more than a dozen GOP senators who had crossed him and called for electing Republican senators who do not stray from the party’s platform. (The Legislature is unicameral, but its members are known as senators.) This is a faux pas in Nebraska, where the Legislature is ostensibly nonpartisan, although it’s no secret which members are Republicans and which are Democrats. Thirteen senators, including five Republicans, chastised Ricketts in an open letter for attacking “respected conservatives elected by the people to obey their own convictions and principles, not the governor’s.”

But Ricketts was doing more than lecturing the Legislature. By the time he gave that speech, he had already endorsed a challenger to one of the Republicans who had clashed with him on those vetoes. Later in the summer, he gave his support to another challenger of an incumbent Republican. Meanwhile, Americans for Prosperity and Trees of Liberty, two groups affiliated with the Koch brothers, used a direct-mail campaign to target incumbent Republicans who had defied Ricketts on the vetoes. (The groups are not required to disclose their donors.) After a May primary—Nebraska employs a jungle primary system in which the top two vote-earners face off in the general election—three sitting Republicans are confronting GOP challengers on November 8.

With the death penalty question on the ballot, these challengers are making it a central campaign issue as they try to oust sitting Republicans who voted to repeal it. They’re “trying to ride it to election,” says state Sen. Mike Gloor, a Republican who voted to repeal the death penalty. Vincent Powers, the head of the state Democratic Party, puts it more bluntly. “Ricketts just wants to impose his will on the Legislature, and so he’s using this emotional issue as a club,” he says. “It’s very troubling if you are like me and you think democracy is a good thing.”

“Ricketts just wants to impose his will on the Legislature, and so he’s using this emotional issue as a club. It’s very troubling if you are like me and you think democracy is a good thing.”

The fact that the repeal effort succeeded at all was something of a miracle. For decades, state Sen. Ernie Chambers, a liberal independent who has served in the Legislature since the 1970s, has unsuccessfully introduced a bill to abolish the state’s death penalty. But in 2015, with a large freshman class open to arguments against the death penalty, a few conservatives in the Legislature took up the cause as well.

By all accounts, Nebraska’s death penalty is a failure. The last execution in the state took place in 1997, but the state continues to spend $14.6 million a year on costs related to maintaining the death penalty, according to a study commissioned by the state’s anti-death penalty coalition. The legislators who voted to repeal it had come to believe that the death penalty was not just a financial loser but also bad policy that was unfairly applied, used to coerce suspects into pleading guilty, and capable of putting innocent people to death.

As the death penalty fight moved from the Legislature to the ballot initiative, a coalition of conservatives, liberals, and the Catholic Church came together to fight to retain the repeal. The coalition has spent more than $2.5 million on voter education efforts, canvassing, and TV ads—far more than its pro-death-penalty counterpart has spent.

The second big question is turnout. Nebraska does not have a governor’s race or a US Senate race this year, leaving the presidential race as the main draw for voters to get to the polls. But Nebraska, though deeply conservative, is not exactly Trump territory. Ricketts endorsed Trump after his first choice, Ted Cruz, dropped out of the primary, but he has not donated to Trump’s campaign; his wife, meanwhile, registered as a Democrat and is supporting Hillary Clinton. Both of the state’s Republican US senators have spoken out against Trump: Ben Sasse is perhaps the most prominent Never Trump Republican in the country, while Deb Fischer unendorsed him after the infamous 2005 Access Hollywood video was leaked in early October. (She later re-endorsed him.) “I think there’s a legitimate chance that the Legislature will be held up,” Coash says hopefully. “It all comes down to turnout.”

Most politicians and analysts predict the repeal will be overturned because Nebraska is such a conservative state. “I would be absolutely shocked if the voters basically supported to keep the repeal of the death penalty,” says Aaron Trost, a Republican operative who ran Fischer’s campaign in 2012. In August, the pro-death-penalty group released a poll showing that 2 out of 3 Nebraskans support the death penalty. Dan Parsons, the spokesman for the anti-death-penalty group, has argued that the poll was “flawed.” Unlike the poll, the referendum states that if the death penalty repeal stands, defendants who would otherwise have received a death sentence would instead get life in prison. Previous polling has shown that when life without parole is mentioned as the alternative to the death penalty, some Americans switch from death penalty support to opposition.

“We’ve outworked them and outmaneuvered them for over a year now,” Parsons says. As of early October, according to campaign finance disclosures, the anti-death-penalty group had raised $2.7 million to the pro-death-penalty group’s $1.2 million—and most of the latter funds were spent gathering signatures to put the issue on the ballot.

The anti-death penalty group received big donations from liberal philanthropic organizations. Major contributors to the pro-death penalty group include Pete and Joe Ricketts and billionaire Republican donor Robert Mercer, as well as two national dark-money groups. One of those groups, Citizens for a Sound Government, spent money on Ricketts’ behalf during his 2014 primary. It’s unclear who is behind the groups’ money or why outside groups see fit to invest in the death penalty in Nebraska. One possibility is that they’re investing in something else: Ricketts’ broader conservative agenda and his career, perhaps on the national stage.

“Should the ballot initiative lose, that would be a big blow to him,” says Landow, the political scientist. “So it’s a gamble. And he took it, I think, because he calculated that it was worth it in terms of his future national standing.”