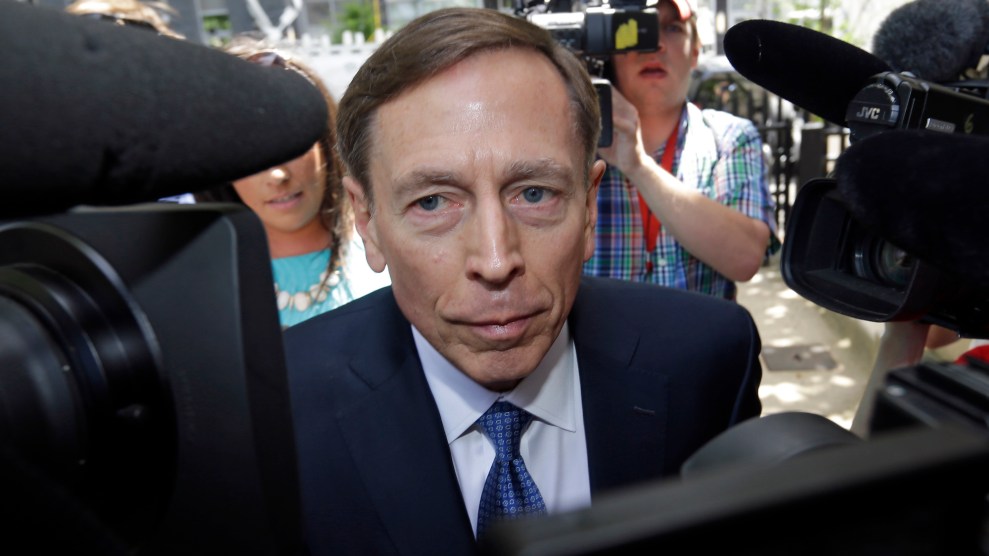 After months of attacking and threatening to jail Hillary Clinton for allegedly mishandling classified information, President-elect Donald Trump has apparently decided none of that stuff really matters. Trump is meeting today with retired general and former CIA director David Petraeus to consider him for Clinton’s former job as Secretary of State. Petraeus pleaded guilty last year to sharing classified information with his mistress in a case that was more serious than the Clinton email server episode.

Petraeus admitted to passing secret information to Paula Broadwell, a former Army officer with whom he had an affair while she was writing a biography of him in 2011 and 2012. Petraeus was CIA director at the time, and he gave Broadwell eight notebooks of highly sensitive information that, according to the Washington Post, “included code words for secret intelligence programs, identities of covert officers, war strategy and deliberative discussions with the National Security Council.” The scandal broke in 2012 when Broadwell began harassing Jill Kelley, a Tampa socialite whom she may have thought was making advances on Petraeus. Kelley went to the FBI, which discovered intimate emails between Broadwell and Petraeus and  uncovered his security breaches, forcing him to resign as CIA director in 2012. In a plea deal, Petraeus acknowledged that his actions had been “in all respects knowing and deliberate, and were not committed by mistake, accident or another innocent reason.” He also lied to FBI investigators, telling them he had not given secrets to Broadwell, a charge that is a felony in itself. He was eventually charged with only a misdemeanor and sentenced to two years’ probation and a $100,000 fine.

Trump often claimed during the campaign that Petraeus’ case was far less serious than Clinton’s, but FBI Director James Comey said the truth was the exact opposite. During a hearing of the House Oversight and Government Reform Committee in July, Comey contrasted Petraeus’ case to Clinton’s in response to Rep Elijah Cummings’ (D-Md.) question: “Do you agree with the claim that General Petraeus, and I quote, ‘Got in trouble for far less,’ end of quote? Do you agree with that statement?”

“No, it’s the reverse,” Comey replied.

Days before the hearing, Comey announced that the FBI would not bring charges against Clinton, saying there was no evidence that Clinton or her staff had intentionally mishandled or deleted the information. Petraeus’ case, however, was a clear-cut and grave violation, and Comey did not mince words. “The Petraeus case, in my mind, indicates the kind of cases that the Department of Justice is willing to prosecute,” he said. “You have obstruction of justice, intentional misconduct and [a] vast quantity of information.”

If Petraeus receives a job in the Trump administration, he won’t be the only former general in the new administration who committed serious security violations. According to a recent article in the New Yorker, soon-to-be National Security Adviser Michael Flynn, a onetime Army general and Defense Intelligence Agency director, was investigated for improperly giving classified information to other NATO countries and “had technicians secretly install an Internet connection in his Pentagon office, even though it was forbidden.” The latter action is a major violation of security procedures for top-secret information, which is held in tightly controlled facilities that ban outside phone and Internet connections. Former NSA lawyer Susan Hennessey said on Twitter, “Honestly, other than actual espionage, I’ve never seen as serious a willful security breach.”

As a candidate, Trump professed great scorn for anyone who improperly handles classified information. Yet as a president-elect, he has changed his tune: from lock-her-up to let-them-in.