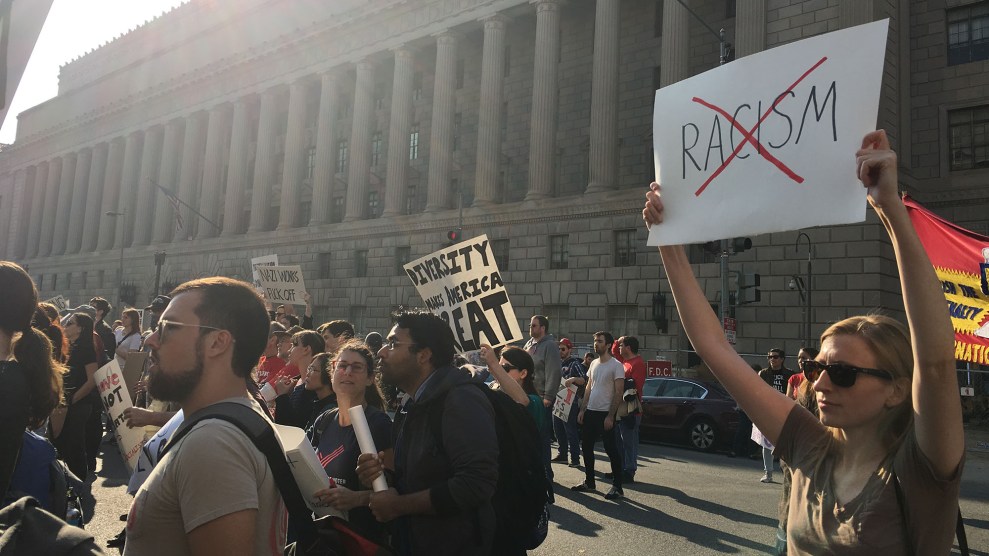 White nationalists gathered in downtown Washington, DC, on Saturday to celebrate the election of Donald Trump as a victory for their movement. As protesters outside carried signs decrying racism, the mood among the approximately 250 white nationalists inside the Ronald Reagan Building was jubilant.

“The alt-right is here, the alt-right is not going anywhere, and the alt-right is going to change the world,” Richard Spencer, a white nationalist who popularized the term “alt-right” to describe the ascendant right-wing movement centered on xenophobia and often racism and white supremacy, told reporters at a press conference during an all-day conference hosted by his group, the National Policy Institute. “And you all need to pay attention to this.”

White nationalists and white supremacists have cheered Trump’s election and rejoiced in the appointments he has made so far in his administration, including former Breitbart News chairman Steve Bannon as chief strategist and Sen. Jeff Sessions of Alabama as attorney general. Spencer called Bannon’s appointment a “wonderful thing.” In July, Bannon, who was still running Breitbart, bragged to Mother Jones that his website had become the “platform for the alt-right.” Spencer said he largely agreed with that statement. “It’s clearly moved away from the conservative movement, it was pro-Trump, and it was also a site that tons of people on the alt-right liked, they get their news from, they share.”

Spencer also spoke approvingly of Sessions, who made a name for himself as the top foe of immigration in Congress. Sessions is also known for allegations that he made racist comments when he was an attorney in Alabama—charges that derailed his 1986 nomination for a federal judgeship and will come up again in his confirmation hearings to become attorney general. When Mother Jones asked at the press conference whether Spencer agreed with the neo-Nazi writer Andrew Anglin, who on Friday said the appointments of Sessions and Bannon meant that he was getting everything he wanted from Trump, the crowd at the conference began to cheer at the mention of Sessions. “It’s getting what is realistically possible,” said Spencer. “Jeff Sessions, again, is someone who is not alt-right but who seems to see eye to eye with us on the immigration question. I think Jeff Sessions might very well resonate with something like a long-term dramatic slowdown of immigration.”

Spencer said Sessions would roll back the Obama administration’s enforcement of civil rights laws as the head of the Justice Department. “The fact that he is going to be at such a high level, I think, is a wonderful thing,” he said. “What he is not going to do in terms of federally prosecuting diversity and fair housing and so on I think is just as powerful as what he might do. So it’s about Jeff Sessions setting a new tone in Washington. I think that’s a good thing.”

Spencer’s top priority for the Trump administration is to change the country’s immigration laws to stop not just undocumented immigration but also legal immigration, with the goal of making sure the United States remains a majority-white country. “I think a goal would be net-neutral immigration with a primary emphasis on Europeans who want to immigrate to the country,” he said. Peter Brimelow of the anti-immigrant website VDare.com later explained that the policy would mean removing immigrants currently in the country and allowing Europeans to take their place. Spencer said he believed passing such a policy through Congress would be easier than the press might think.

When a reporter asked what the movement’s top priority for Trump was, the room began to chant “build the wall.” Spencer agreed that immigration should be Trump’s “primary objective.”

“This is why he was elected,” Spencer said, “because he was the identity president.”

Controversial media personality Tila Tequila, who has identified with Nazis, tweeted from inside the conference.

An estimated 200 to 300 protesters gathered outside the conference, organized by a group called the DC Anti-Fascist Coalition. At about 1 p.m., a conference attendee who exited the conference got into a violent confrontation with protesters.

Fight breaks out outside National Policy Institute after neo-Nazi who was recording lunges at protester #StopNPI pic.twitter.com/h1GdqNOCye

On Friday night in DC, protesters followed Spencer, and one sprayed him with a foul-smelling liquid as he dined with supporters at a restaurant.