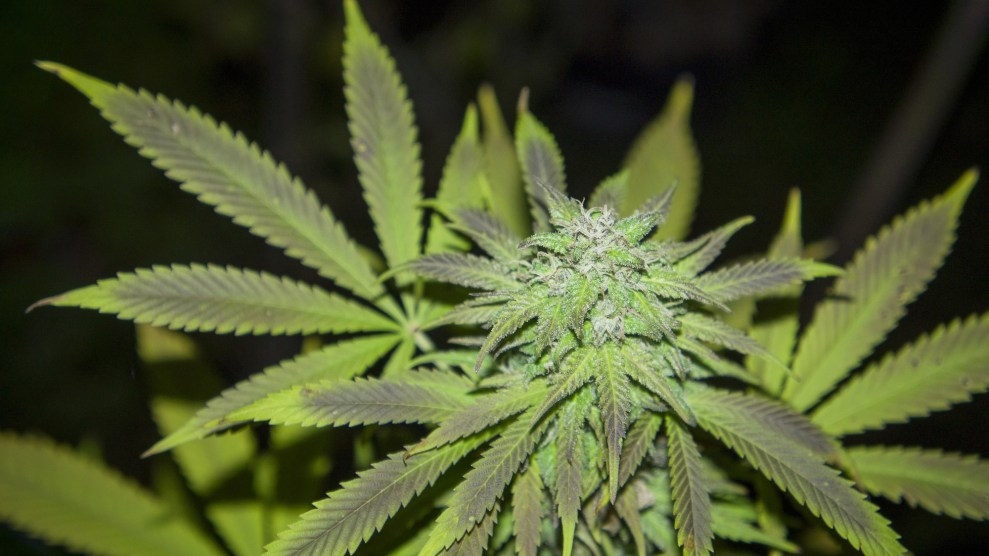 Update, 2:00 p.m.: Voters in Arizona rejected Prop. 205, which would have legalized marijuana for recreational use, according to the Arizona Republic.  The Helena Independent Record reports Montana voters have approved their medical marijuana ballot measure. At 3:30 a.m. local time, the measure had 56 percent support. Maine’s legalization measure, Question 1, is still too close to call, though the Portland Press Herald reports “yes” has a slight lead with 96 percent of precincts reporting.

Update, 1:15 a.m.: ABC News projects Nevada voters will approve recreational marijuana. With 28 percent of precincts reporting, the measure, Question No. 2, had the support of 54 percent of voters.

Update, 11:55 p.m.: The Boston Globe reports Massachusetts will legalize marijuana. With 66 percent of the vote in, 53 percent are in support and 47 percent voted against. In Arkansas, voters have passed Issue 6, the medical marijuana ballot measure, according to KATV Little Rock.

It’s about to be lit.

With an unprecedented number of states holding votes on marijuana for recreational use or medical use, this Election Day could be a major turning point for pot. And now that almost two-thirds—60 percent—of the country supports legalizing marijuana for personal use, things are looking good for supporters of ballot initiatives seeking to broaden access to marijuana.

Tonight, we’ll learn if voters in California, Maine, Massachusetts, Nevada, and Arizona will vote to legalize marijuana for recreational use. Each measure would allow individuals at least 21 years old to carry and use an ounce or more of marijuana (in Maine you’d be able to carry 2.5 ounces). If the initiatives pass, about a quarter of the country will live where weed is legal. There are also four states voting on medical marijuana: Florida, North Dakota, Montana, and Arkansas.

But for pot proponents, all eyes will be on California. Arcview Market Research estimates sales to adult Californians could create a legal cannabis market of just under $6.5 billion, bringing, according to the California Legislative Analyst’s Office, up to a billion dollars in tax revenue. Polling suggests a win in the state, home to about 12 percent of Americans, is very likely, leaving proponents hopeful that the federal government will be forced to bring its policies in line with newly permissive state laws.

“Every time a state decides to roll back marijuana prohibition, it inspires members of Congress to take a closer look at the issue,” says Mason Tvert, communications director for the Marijuana Policy Project. “Federal officials can see the direction in which the nation is headed on this issue, and most seem to recognize that marijuana prohibition is not going to last forever.”

Marijuana is still classified as a schedule I drug by the federal government, a category for substances considered to have a high potential for abuse and no medical use. That’s lead to perpetual tensions between federal drug law enforcement and local officials and cannabis businesses in places where marijuana is legal under local law. The classification has also been a roadblock for medical research, helping to prevent the kind of studies that might convince the federal government to change the drug’s scheduling.

We’ll be watching as results come in tonight and updating this post. Check back to see which states voted yes and no.