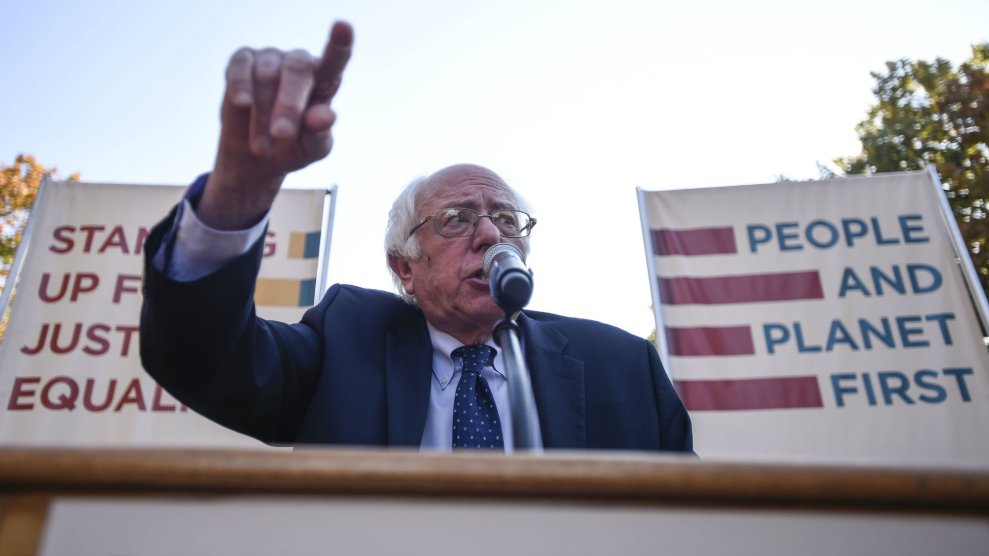 As Democrats point fingers in the aftermath of Donald Trump’s surprise win last week, Bernie Sanders is taking aim at one culprit: the Democratic Party. “One of the reasons that he won is, in my view, a failure of the Democratic Party that must be rectified,” Sanders told a cheering crowd at a Thursday rally on Capitol Hill convened by his political action committee and a coalition of progressive advocacy groups.

Sanders, though, is opting to try to change the party from without rather than within. Although the self-identified democratic socialist just secured a leadership post in the party, as its outreach director, he will continue to serve in the Senate as an independent. “The real action to transform America won’t take place on Capitol Hill,” Sanders said Thursday morning at a Christian Science Monitor breakfast, according to The Hill. “It will be in the grassroots America among millions struggling economically and young people.”

He added, “I initially understand my role to be to get those people into the political process to demand the US Congress and government and president represent all of the people and not just those on top. I’m excited about it, but how we go about it, I don’t know.”

Sanders’ party affiliation didn’t seem to matter much to supporters at the rally. “Is he an independent?” said Greg Hamilton, 23, who works for a group advocating criminal sentencing reform for youth offenders. “Is he a Democrat? Like, I could care less. I know that he represents what I want.” Hamilton voted for Sanders in the Democratic primary but for Clinton last week. “She would’ve been a whole heckuva lot better than Trump,” he said.

Sanders and Trump actually shared some populist messages on the campaign trail, including their opposition to the Trans-Pacific Partnership trade deal that Clinton initially backed. But Lynette Raudner, a 31-year-old attendee of the rally, wasn’t impressed. “Do you really know where Donald Trump stands on trade?” asked Raudner, who volunteered for the Clinton campaign but could not vote because she was born in South Africa and is awaiting her citizenship. “If his message is to not have the TPP, then yeah, I’m glad that we have something in common, but I don’t know if that’s really the case.”

So where do Sanders and his movement go from here? His supporters who have responded to his message have no intention of giving up. Randle Edwards, 82, a retired law professor, said Sanders should focus his efforts on mobilizing his extensive donor network to regain a Democratic majority in the Senate in 2018. Edwards gives Sanders credit for his consistent message on wealth distribution, equal rights, and abortion. He added, “I’ve been waiting for Bernie Sanders for 50 years.”