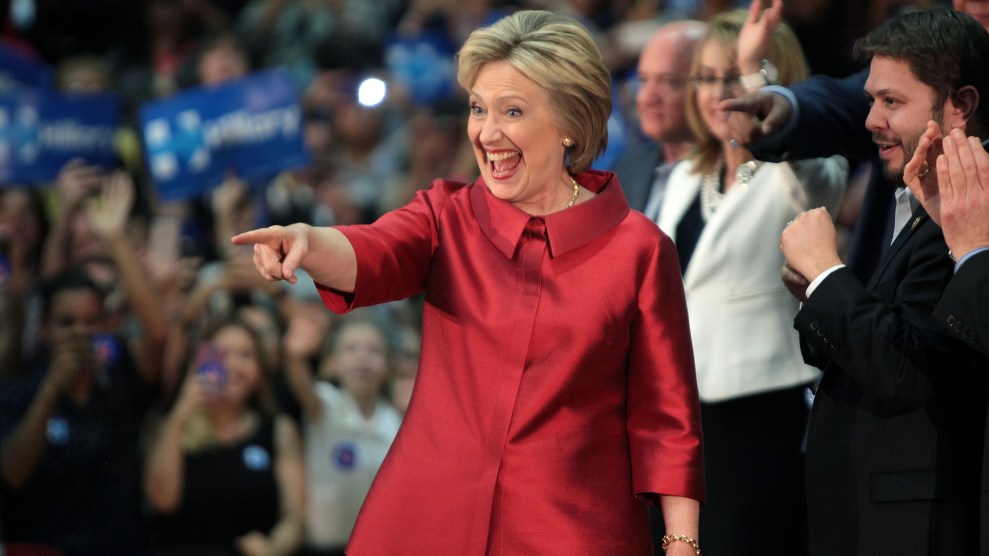 The Clinton campaign is going all-in for a state it doesn’t even need to win. On Monday, Hillary Clinton’s campaign manager announced that her campaign would spend $2 million on ads and direct mail in Arizona. Perhaps more important, the campaign is redirecting some of its top surrogates from traditional battleground states to Arizona, including Chelsea Clinton, Bernie Sanders, and perhaps the campaign’s most valuable asset, Michelle Obama, who spoke in Phoenix on Thursday afternoon.

Sometimes presidential candidates with a commanding lead try to expand the electoral map simply because they can; a dominant win can translate into a mandate once in office. In 2008, for example, Barack Obama’s campaign was so far ahead in polling and resources that it started investing in Indiana. Obama won the state, which became a symbol of how big his 2008 victory really was.

But Arizona could serve a strategic purpose that Indiana did not. Unlike the Hoosier State, it has a large and increasingly politically active Latino population. Tellingly, when Clinton campaign manager Robbie Mook announced the investments in Arizona, he also announced an ad buy in Texas, another state with a large Latino population that was thought to be out of play for Democrats until the Donald Trump campaign began its recent implosion. If she wins Arizona, Clinton could bring Republicans to the table on immigration reform by proving to them that they have no shot at the White House—that even formerly safe red states will turn blue—if they continue to hold the Trump line on immigration.

“We have been able to move the Latino community to participate in the civic life of Arizona on the issue of immigration,” says Ben Monterroso, executive director of Mi Familia Vota, a group that has worked to register Latinos in Arizona and other states this year. He points out that in 2010, the year Arizona passed its draconian anti-immigrant law, there were 50,000 Latinos registered to vote by mail. Today, he said, there are more than 350,000. “I hope that Hillary Clinton and her campaign see this as an opportunity to send a clear message to Republicans that enough is enough to be playing around with the issue of immigration.”

The fact that Clinton has sent the popular first lady to Arizona is a sign that the campaign is in it to win it. “Sending Michelle Obama sends a signal that a lot of it will hinge on turnout, and in that state particularly Latino turnout,” says Gabriel Sanchez, a pollster with the firm Latino Decisions. Sanchez says his survey data shows that if the campaign can ramp up turnout among Latinos, it has a “legitimate” shot at winning Arizona. Obama did not disappoint; the first lady delivered a rousing speech to a sea of fans in Phoenix. Of course, there will still be hurdles to accomplishing immigration reform in Congress, thanks largely to the uphill battle Democrats face in taking back the House of Representatives. But it would be a warning shot to Republicans in Washington to help move on immigration reform—and to future Republican presidential candidates that Trump’s hardline immigration stance was a losing electoral strategy.

Monterroso believes Arizona is more like California than like Indiana. Just as Arizona’s Barry Goldwater helped launch the conservative movement with his 1964 presidential candidacy, California was once a home base for the Republican Party, sending Richard Nixon and Ronald Reagan to the White House. In 1994, California’s Republican governor supported an anti-immigration ballot initiative known as Proposition 187. The move is largely credited with turning the state solidly blue by mobilizing Latinos against the GOP. “Look at what happened in California,” he says. “I think Arizona is in the same direction if the Republican Party doesn’t do anything different in this election.”