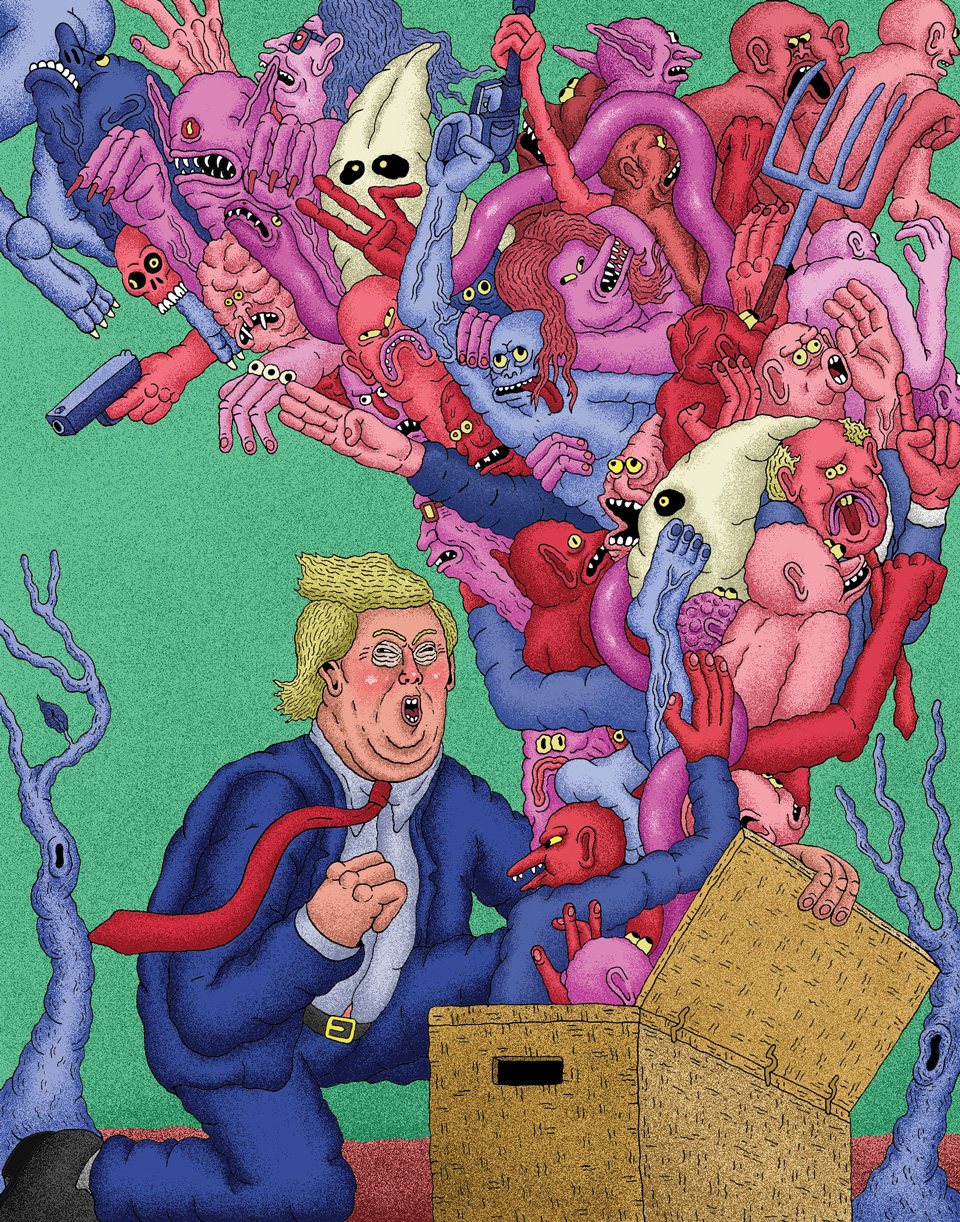 One of the most popular items at this year’s Republican National Convention was a navy blue T-shirt that at first glance looked terribly out of place. “Hillary,” it read in large letters. Beneath was the punchline: “for Prison.” You could find the slogan everywhere—on stickers, signs, and buttons, on a banner towed by an airplane over Cleveland, on the lips of convention speakers such as Patricia Smith, whose son was killed in Benghazi. “Hillary for Prison” quickly became a rallying cry synonymous with Donald Trump’s presidential campaign—but it did not originate with the Republican nominee.

The phrase was popularized by Infowars.com, the conspiracy theory site run by the radio host Alex Jones. Jones’ online store started selling “Hillary for Prison” T-shirts in the fall of 2015, alongside other merch calling 9/11 “an inside job” or warning about fluoridation. But its revival as a catchphrase of the Republican candidate was fitting. Never before has a presidential campaign, from its paranoid messaging to its white nationalist backers, been rooted so deeply in the fever swamps of the right-wing psyche. 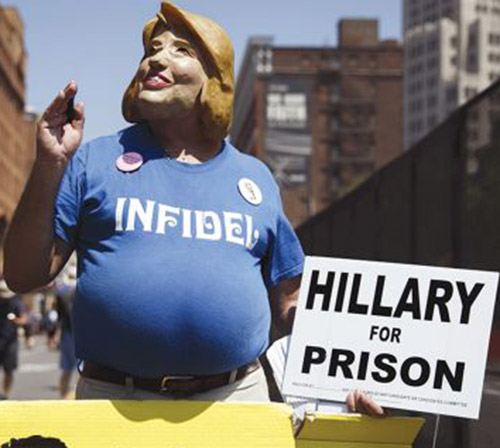 Consider Trump’s inner circle: Campaign CEO Stephen Bannon is on leave from Breitbart News, the conservative site he helped turn into a one-stop destination for breathlessly reported stories like “Muslim Prayer Rug Found on Arizona Border” (on closer inspection, the “rug” was probably a track jacket). Trump’s deputy campaign manager, David Bossie, a peddler of many of the wildest Clinton conspiracy theories of the 1990s, once made a documentary alleging that Hillary Clinton had murdered a critic’s cat. Trump adviser Roger Stone, a former Nixon campaign aide and political dirty trickster, wrote a book claiming that Chelsea Clinton got four plastic surgeries to mask the identity of her real father.

Populist movements have long flirted with what political theorist Richard Hofstadter, writing about Barry Goldwater in 1964, called the “paranoid style in American politics”—the penchant for framing opponents as the tools of a powerful but shadowy fifth column. But Trump has embraced and normalized the political fringe in unprecedented ways—and that could have far-reaching effects.

“It is surreal to talk about issues here on air, and then word-for-word hear Trump say it,” Alex Jones confessed.

That Trump would devote much of the substance of his campaign to wild claims and ominous innuendo is not surprising: This is what first made him a conservative star. Five years ago, Trump embarked on a national press tour to question the legitimacy of President Barack Obama’s birth certificate. Obama, Trump suggested, was actually a Kenyan-born impostor named “Barry Soweto.” Establishment Republicans may have snickered, but Trump’s strategy was an unmitigated success. A CNN poll showed that his support among likely GOP voters nearly doubled once he started talking about the birth certificate. He became a regular guest on Fox & Friends, a sought-after speaker at conservative dinners, and a campaign prop for Mitt Romney, who flew to Las Vegas to accept Trump’s endorsement. In just a few months, Trump showed how intoxicatingly viral the netherworld of conspiracies could be. (Even when he finally conceded that Obama was born in the United States, he claimed the birther rumors originated with Clinton.)

From the day he kicked off his 2016 presidential campaign, an air of paranoia has infused almost everything Trump has said or done. He demanded a border wall on the grounds that Mexico was sending killers and rapists into the country, boosting his claims with an Infowars video he’d seen on the Drudge Report. He promised to “bomb the shit out of” ISIS, while insinuating that the current commander in chief harbored sympathies for the terrorist group (“There’s something going on”). After Supreme Court Justice Antonin Scalia died in his sleep, Trump fanned theories of an assassination. He trumpeted a National Enquirer story suggesting that Ted Cruz’s dad was involved in the Kennedy assassination (even though Stone had written a best-selling book fingering Lyndon B. Johnson).

How amazing, the State Health Director who verified copies of Obama’s “birth certificate” died in plane crash today. All others lived

Trump has floated so many conspiracy theories that he’s developed his own rhetorical flourish to reinforce them. “A lot of people are saying that bad things are happening out there,” he said about the possibility of Islamist training camps on American soil. “A lot of people are very skeptical as to what happened and how he died,” he remarked about former White House deputy counsel Vince Foster, whose 1993 suicide spawned countless conspiracy theories and a quixotic congressional probe. (As the Art of the Deal author is probably aware, pushing a position by neutrally introducing it as the opinion of others is Negotiation 101.)

Nowhere is Trump’s embrace of oddball ideas and cranks more evident than his courtship of Jones, a 42-year-old Texan who built a lucrative media empire by hawking anti-radiation tablets and fulminating about “false flag” operations and the globalist cabal. It was previously unthinkable for a major-party nominee to appear on Jones’ show (broadcast from “FEMA Region 6”), but Trump is an exception. Stone has appeared regularly on Jones’ daily program, and the two were inseparable at the GOP convention, where they co-hosted a pro-Trump rally. Campaign aides and Donald Trump Jr. have promoted Infowars stories on social media. And Trump himself, who phoned into Jones’ show last December for a friendly chat, has welcomed the host’s support and parroted his message to a degree that has shocked even Jones. “It is surreal to talk about issues here on air, and then word-for-word hear Trump say it two days later,” Jones confessed on the air in early August.

Take one of Jones’ pet theories: Clinton is battling serious health problems that make her unfit to hold office. Alluding to a concussion Clinton suffered four years ago, Trump said at a rally in August that “she took a little short-circuit in the brain—she’s got problems.” He added, “Honestly, I don’t think she’s all there.” Days before Trump first broached the subject, Infowars published a video, “The Truth About Hillary’s Bizarre Behavior,” which has had more than 4.7 million views. “Is Hillary on the verge of a mental breakdown due to stress, or are her strange outbursts linked to a medical condition?” the narrator asked. As Trump and his surrogates began pushing their own theories about Clinton’s health, the narrative soon became ubiquitous. For nearly a week, Fox News’ Sean Hannity devoted his nightly show to the rumors and brought on “experts” such as Ben Carson to speculate on whether Clinton had brain damage. Trump’s son Eric told an interviewer he was “scared” just watching Clinton cough. The story came to a head in September, when Clinton, suffering from pneumonia, stumbled at a 9/11 commemoration in Manhattan. The summerlong drumbeat of medical rumors had laid the foundation for more reputable outlets to treat Clinton’s health as a matter of dispute.

In late August, Clinton addressed Jones’ role in the campaign during her speech on Trump’s courtship of the so-called alt-right. “He even said the victims of the Sandy Hook massacre were child actors, and no one was actually killed there,” she said, accurately describing Jones’ comments on the 2012 school shooting. “I don’t know what happens in somebody’s mind or how dark their heart must be to say things like that, but Trump doesn’t challenge these lies.”

Trump started channeling Alex Jones in his stump speech: “I’m afraid the election is going to be rigged, I have to be honest.”

Even some conservatives now fear they may have crossed a Rubicon of sorts. “We’ve basically eliminated any of the referees, the gatekeepers—there’s nobody,” Charlie Sykes, a prominent conservative talk radio host (and Trump critic) told Business Insider. Republicans spent years attempting to discredit the mainstream media as deceitful and dishonest—sometimes with reason, Sykes argued. But in the process, they created a vacuum that the conspiracy mongers of Breitbart and Infowars have happily filled and Trump has deftly exploited.

But it’s not just Clinton who’s in the crosshairs of the Trump-Jones conspiracy machine—it’s electoral democracy itself. This summer, Jones warned of an attempt at “rigging” the election to deny Trump the presidency. He proposed sending teams of cameramen to polling sites to document the “illegals” voting for Clinton. By early August, Trump was channeling Jones in his stump speech. “I’m afraid the election is going to be rigged, I have to be honest,” he said. He told the Washington Post that he feared unscrupulous Democrats would try to “vote 10 times.” By injecting so much distrust into electoral results, Trump could delegitimize a Clinton victory, setting himself up as a bomb-thrower in exile.

No wonder Jones has told listeners that he’s urged Trump to keep pushing the “rigged election” narrative. The Infowars host filmed a short segment wondering if the Democrats would try to have him killed. After all, by calling him out, Clinton did something his enemies, those globalist tyrants and UN stooges, had spent years avoiding at all costs. “You don’t say, ‘Alex Jones’! You never say the name Alex Jones!” he said. “But more and more, they have to speak the name that no one says.” For once, he had a point—a lot of people were saying it.