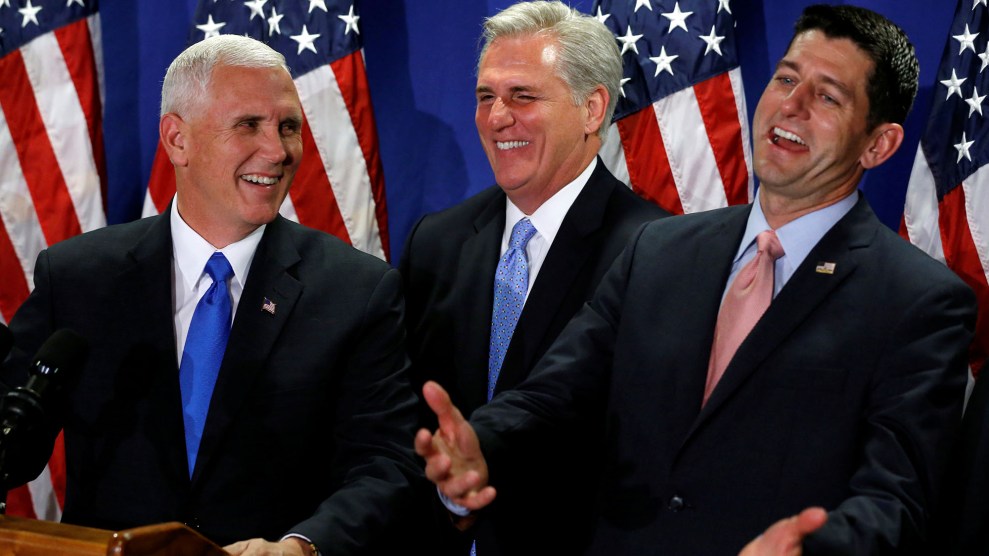 From Left: Mike Pence, Rep. Kevin McCarthy (R-Calif.) and House Speaker Paul Ryan (R-Wis.) laughed when a reporter began to ask Pence a question about his criticism of Donald Trump, during a news conference last month.Jonathan Ernst/Reuters via ZUMA Press

Republican politicians began abandoning Donald Trump in droves Saturday, just hours after an unearthed video from 2005 revealed the Republican nominee crudely bragging about what amounted to sexual assault. After months of demurring while Trump’s offensive comments piled up, dozens of leaders are finally walking away from their party’s nominee. Now, many say they can’t support him. Some are even urging the party to deploy some sort of last-minute maneuver to remove Trump from the GOP ticket.

But as the party engages in a collective weekend meltdown, it’s important to remember that Trump’s nomination wasn’t inevitable. There’s no doubt that Trump tapped into an anti-establishment, grassroots fervor that helped him win the nomination. But there was a monthslong slog, during which time Republicans—many of whom are now denouncing him—could have have put up a fight against him. When Trump effectively clinched the nomination by winning the Indiana primary on May 3, the Republican establishment had barely lifted a finger to deprive him of the nomination.

Even before Friday’s revelations by the Washington Post, anti-Trump Republican strategists were expressing dismay at how easy it had become for Trump to take over the entire party.

“I was extremely surprised by how easy people rolled over for him,” Tim Miller, a Republican in the Never-Trump camp, told Mother Jones in an interview shortly before the 2005 video was released Friday afternoon. “I never could have imagined, even as late as last year, that the establishment of the Republican Party in Washington would just completely roll over for Trump and there would be minimal objection to his nomination. It just blew me away that there were not mass resignations or very visible objections.”

“There was still plenty of time to slow down Trump and to stop Trump,” Miller said.

Miller, an alum of the Republican National Committee, worked as Jeb Bush’s communications director. When Bush dropped out of the primary after the South Carolina primary on February 20, Miller went to work for Our Principles PAC, an anti-Trump effort funded largely by billionaires Joe and Marlene Ricketts.

“There was still plenty of time to slow down Trump and to stop Trump,” Miller recalled. He said the super-PAC tried to get Republicans leaders in upcoming primary states to object to Trump, from governors, congressmen, and senators to retired politicians and conservative pundits. His group had almost no luck.

“You know, this was doable,” Miller said. “And because a lot of politicians did not want to take the risk, because a lot of them did not feel like Ted Cruz was that much better—which was BS—nobody stuck their neck out there. And I, you know, I can’t believe it.”

It wasn’t only Republican officials who refused to stick their necks out; neither did more than a handful of Republican donors. “The Ricketts, to their credit, stuck their neck out on this and created this PAC,” Miller said. “After Jeb dropped out there were a few other donors who got on board. But it was a small number of donors who were carrying a big load on this, for sure.”

In the end, even that wasn’t enough. The Ricketts later switched sides and gave $1 million to a super-PAC supporting Trump.

Of course, Trump hasn’t changed in the months since he was just one of 17 candidates. Back then, he was still a birther with a history of misogynist behavior (which he continued during the campaign), spreading fear toward immigrants and Muslims. And yet, as Miller put it, the establishment just “rolled over for him.”