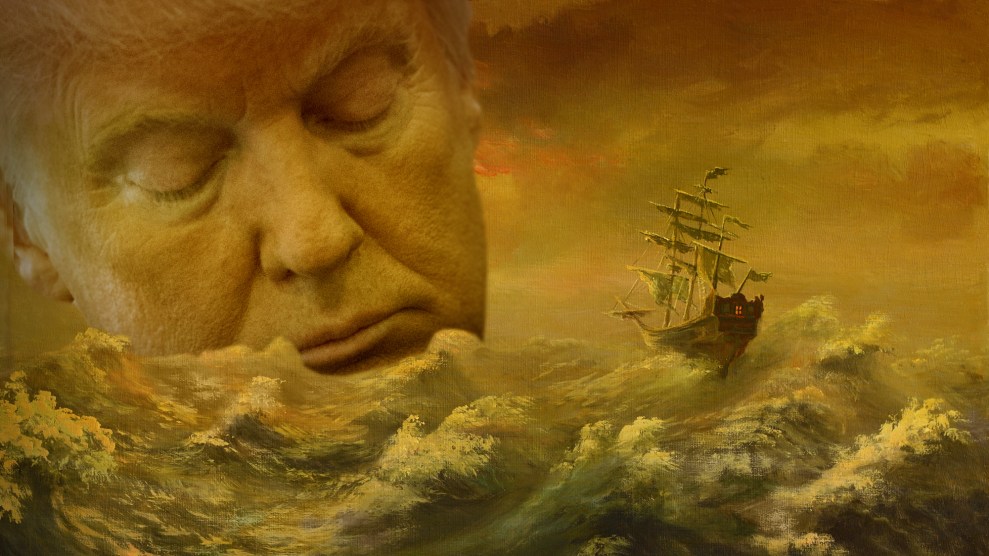 A growing number of Republicans have condemned their party’s nominee in the wake of the Washington Post‘s scoop Friday featuring footage in which Donald Trump boasts of groping and kissing women without their consent.

The video has led to a slew of condemnations from horrified Republicans, some of whom have called for Trump to step down and even for running mate Mike Pence, a lifelong religious conservative, to step in as the party’s candidate for president. Here’s how it’s played out so far:

.@realDonaldTrump should drop out. @GOP should engage rules for emergency replacement.

9:07 p.m., October 7: Rep. Jason Chaffetz of Utah tells Fox 13 News, “I’m out. I can no longer in good conscience endorse this person for president. It is some of the most abhorrent and offensive comments that you can possibly imagine.”

Donald Trump’s statements are beyond offensive & despicable. While I cannot vote for Hillary Clinton, I will not vote for Trump. #utpol

10:16 p.m., October 7 (approximately): Rep. Mike Coffman of Colorado, who already didn’t support Trump, issues a statement: “For the good of the country, and to give Republicans a chance of defeating Hillary Clinton, Mr. Trump should step aside. His defeat at this point seems almost certain and four years of Hillary Clinton is not what is best for this country. Mr. Trump should put the country first and do the right thing.”

12:29 a.m., October 8: Sen. Mike Lee of Utah posts a Facebook video affirming his opposition to Trump and adding, “I respectfully ask you, with all due respect, to step aside. Step down, allow someone else to carry the banner of these principles.”

12:49 a.m., October 8: Rep. Barbara Comstock of Virginia, who has not endorsed Trump throughout this campaign: “This is disgusting, vile, and disqualifying. No woman should ever be subjected to this type of obscene behavior and it is unbecoming of anybody seeking high office. In light of these comments, Donald Trump should step aside and allow our party to replace him with Mike Pence or another appropriate nominee.”

1:56 a.m., October 8: Rep. Chris Stewart of Utah tells a local TV station, “I’m incredibly disappointed in our party’s candidate am therefore calling for him to step aside and to allow Mike Pence to lead our party.”

Character matters.@realDonaldTrump is obviously not going to win.
But he can still make an honorable move:
Step aside & let Mike Pence try.

9:07 a.m., October 8: Arizona Sen. Jeff Flake, who never endorsed Trump and rebuked him at a meeting on Capitol Hill, demands that the Republican nominee exit the race immediately:

.@realDonaldTrump is wrong about his level of support. He needs to withdraw from the race. https://t.co/sv7K3qmF1w

9:15 a.m., October 8: Gov. Robert Bentley of Alabama—who is himself facing possible impeachment over an affair with an aide—tells the Montgomery Advertiser, “I certainly won’t vote for Hillary Clinton, but I cannot and will not vote for Donald Trump.”

Donald Trump’s behavior makes him unacceptable as a candidate for president, and I won’t vote for him.

10:45 a.m., October 8: Ohio Gov. John Kasich, the last man to drop out of the Republican presidential race, calls Trump “a man I cannot and should not support.”

I can no longer endorse Donald Trump. Read my full statement: pic.twitter.com/lfa9mYZbdC

“I cannot support him as my party’s nominee.” — @GovSandoval pic.twitter.com/MMR1yvuxgE

I will not vote for Donald Trump. Read my statement here: pic.twitter.com/F8zajgDZpg

BREAKING: Another Nebraskan has abandoned Trump. U.S. Rep. Jeff Fortenberry calls for Trump to step down. Will back Pence

There it is: MN Rep Erik Paulsen won’t be voting for Trump pic.twitter.com/KrTL2uBhaM

Enough is enough. Donald Trump should withdraw in favor of Governor Mike Pence. This election is too important.

Donald Trump should withdraw and Mike Pence should be our nominee effective immediately.

12:58 p.m., October 8 (approximately): Rep Bradley Byrne of Alabama releases a statement: “Donald Trump’s comments regarding women were disgraceful and appalling. There are absolutely no circumstances under which it would ever be appropriate to speak of women in such a way. It is now clear Donald Trump is not fit to be President of the United States and cannot defeat Hillary Clinton. I believe he should step aside and allow Governor Pence to lead the Republican ticket.”

1:05 p.m., October 8: Rep. Charlie Dent of Pennsylvania, who said in August he wouldn’t vote for Trump, told the Morning Call on Saturday that Trump’s statement’s “are indefensible and disturbing coming from an individual seeking the nation’s highest office. Given his past erratic behavior and incendiary comments, the latest revelations regarding Donald Trump do not come as a surprise. The comments highlight the reason why I could not support the nominee this cycle.” According to the New York Times, Dent also urged Trump to withdraw from the race and said that if Trump refuses to do so, the GOP should abandon the candidate and shift its focus to down-ballot races.

My statement on Donald Trump and the presidential election —> pic.twitter.com/VUiHAGgkLb

1:33 p.m., October 8: Rep. Fred Upton of Michigan, who declined to endorse Trump in June, said today, according to the New York Times:

“I urge him to think about our country over his own candidacy and carefully consider stepping aside from the ticket.”

1:56 p.m., October 8: Rep. Joe Heck, who is running for Senate in Nevada, releases his full statement from a Saturday rally. An excerpt:

@Heck4Nevada pulls support from @realDonaldTrump – calls for him to step down. #Nevada pic.twitter.com/IEukSeqUjF

At the same rally, Nevada Rep. Cresent Hardy, a top Democratic target, says, “I will no longer support the guy at the head of the ticket.”

The comments made by Mr. Trump were disgusting and totally unacceptable under any circumstance. (1/2)

It would be wise for him to step aside and allow Mike Pence to serve as our party’s nominee. (2/2)

2:52 p.m., October 8: Rep. Will Hurd of Texas, locked in a tough reelection fight, calls on Trump to step aside:

If Donald Trump wishes to defeat Hillary Clinton, he should do the only thing that will allow us to do so – step aside. My full statement: pic.twitter.com/hadKP4gIrr

4:48 p.m., October 8: Rep. John Katko of New York, a Trump critic who had never endorsed, says Trump should step down because “his comments cannot be justified and crosses every line you can imagine.”

John McCain withdraws support: “Trump’s behavior…make it impossible to continue to offer even conditional support for his candidacy.” pic.twitter.com/pGlAI4beQW

While I continue to respect those who still support Donald Trump, I can no longer support him. Read my statement: https://t.co/7OGYW98KGF