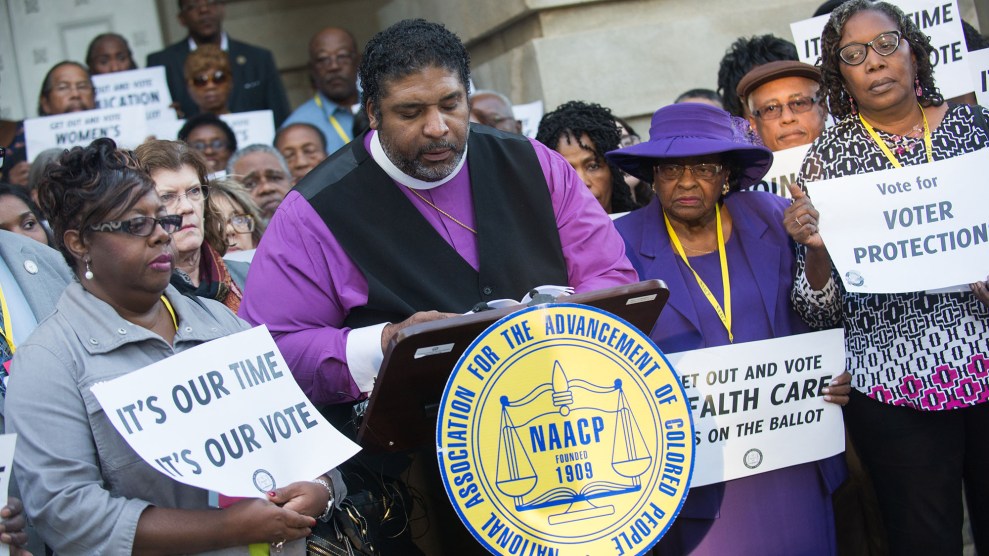 Update November 4, 5:45 p.m.: A federal judge issued a preliminary injunction Friday ordering the state to restore all voter registrations that were canceled as part of a voter purge in several counties. During the hearing earlier in the week, US District Court Judge Loretta Biggs repeatedly stated that the state’s last-minute process for removing voters from the rolls sounded “insane.”

Voting rights advocates in North Carolina filed an emergency petition in federal court on Monday alleging that at least three counties in the state have engaged in a systematic effort to purge voters, including a disproportionate number of African Americans, from the voter rolls in the final weeks before the election.

North Carolina is a key swing state that will help determine which party controls both the White House and the Senate. It has also been ground zero for voter suppression since the Supreme Court gutted the Voting Rights Act in 2013. This summer, the 4th Circuit Court of Appeals blocked a draconian voter ID law, finding that its provisions “target African-Americans with almost surgical precision.” On Monday, voting rights advocates alleged that several counties were removing people from the voter rolls in a manner that targeted African Americans and violated federal law.

The lawsuit, filed by the state chapter of the NAACP, the Moore County NAACP, and four plaintiffs, alleges that election officials in Beaufort, Moore, and Cumberland counties have been removing voters from the rolls in violation of the National Voter Registration Act, which created safeguards against the unfair cancelation of voters’ registration. According to the complaint, these counties have removed thousands of individuals from the voter rolls because of claims that their addresses had changed. The challenges to the voter registrations, filed by just a handful of individuals, were based on a single piece of mail that had been returned as undeliverable from the addresses where the voters were registered. The suit states that the individuals with challenged registrations are disproportionately African American.

Barber warned that the purges could be a coordinated effort by local Republican activists. “In Beaufort County, four individuals (including two 2015 candidates for local office, Ricky Radcliffe and Shane Hubers) filed challenges to 138 registered voters in September and October 2016,” the complaint alleges. “The sole basis for these challenges appears to be a mass mailing from Mr. Radcliffe’s 2015 campaign that was returned from these voters’ addresses as undeliverable.”

“What we know is that in two of the counties the people who brought the challenges had connections to the local Republican Party,” Penda Hair, a lead attorney on the case, said on the conference call. “The pattern of these challenges is very, very similar across the three counties. And we also know that a right-wing group called the Voter Integrity Project was involved, and their return address appears on the piece of mail that was used to challenge voters in one county. We believe that these folks were acting in concert with each other to do the mailing and canvass the ones that came back and decide which ones to challenge.”

State authorities say the county election boards are following state law, which allows third-party voter registration challenges. The lawsuit counters that the law is being implemented in a manner that violates federal law, which supersedes state law. “The NVRA prohibits systematic removals within 90 days of an election,” Hair said on the call. “In this case, all three of the counties removed voters after the 90-day cutoff, which occurred back in August.”

In Moore County, the complaint alleges that a single person, N. Carol Wheeldon, challenged the registrations of about 400 people on “the sole basis” of a single “undelivered, returned letter from a mass mailing” that had been sent in envelopes marked “DO NOT FORWARD.” After two hearings were held—which none of the challenged voters attended—almost all the challenged voters had their registration canceled and were not informed of the cancelation.