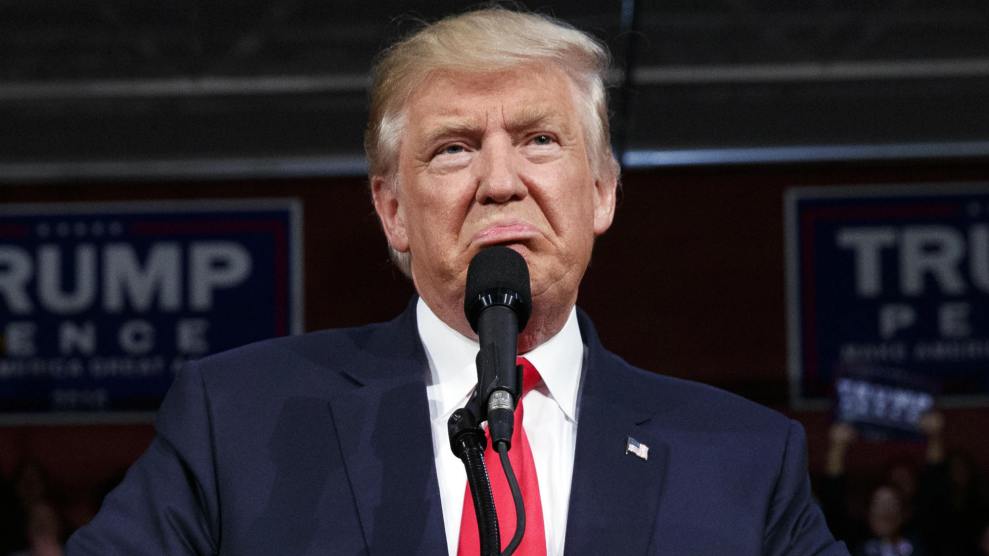 At the first presidential debate, when GOP presidential nominee Donald Trump was asked by moderator Lester Holt why he wouldn’t release his tax returns, he declared that the personal financial disclosure form he had filed with the Federal Election Commission would tell voters all they need to know about his finances. And Trump bragged that this document showed that his income in 2015 was $694 million. He added, “If you would have told me I was going to make that 15 or 20 years ago, I would have been very surprised, but that’s the kind of thinking that our country needs.”

Trump’s tax returns would reveal much more than the FEC disclosure forms: how much he paid (or didn’t pay) in federal taxes, what he donated to charity, and the actual level of his income. That latter point is important, for there are financial filings that Trump recently submitted overseas that undermine his boast that he pocketed nearly $700 million. These records strongly suggest that he made far less and that he could be dissembling about his wealth.

The FEC financial disclosure form that Trump referred to at the debate requires federal candidates to state rough approximations of their income, assets, and liabilities. Many items are listed within a range, say between $50,000 and $100,000. Totaling up Trump’s reported income on that form at the highest end of the ranges does yield a figure near $694 million. (At the lower end, it’s closer to $600 million.) But the income listed on the form appears to be largely revenue—that is, the money a particular enterprise generated, not the profit—and not Trump’s personal takeaway. The $694 million isn’t what Trump pocketed at the end of the day; it’s how much cash his various companies brought in before they had to cover expenses. The Office of Government Ethics guide for filling out the form even explicitly states “definition of investment income for purposes of financial disclosure is not tied to the Internal Revenue Service’s definition of income for tax purposes.”

There is no telling from this form what Trump truly made as income. But documents he filed overseas indicate there could be a great discrepancy between what he claimed at the debate and what he banked. These filings in the United Kingdom cover the operations of two Scottish golf resorts, one at Turnberry and one at Aberdeen. These courses are major enterprises in Trump’s wide-ranging international golf empire.

According to his FEC financial disclosure form, which was submitted in May, Trump collected $296 million in “golf related revenue”—a full 42 percent of the income he cited in the debate. But this figure did not take into account the costs of running all his courses and resorts. Most of Trump’s businesses, including his golf courses, do not have to publicly disclose how much revenue or profit they yield annually. But there are three exceptions: his two Scottish golf courses and one Irish course. Corporations in the United Kingdom and Ireland must submit public reports that list revenue, expenses, and profit.

Trump’s FEC financial form noted that his two Scottish golf courses earned him a combined $23 million in “golf related revenue” last year, with Turnberry pulling in $18.1 million and Aberdeen making $4.8 million. But the public filings the courses submitted in the United Kingdom tell a much different story. Trump’s prized course at Turnberry—where he made a much ballyhooed appearance right before the Brexit vote—reported $16.8 million in revenue in 2015 and $18.6 million in expenses. When interest, depreciation, and currency exchange losses are factored in, Trump’s Turnberry course lost over $2 million in 2015. And the corporate filings in the United Kingdom show that Trump’s Aberdeen course lost about $1.6 million.

That means that Trump’s reported income on the FEC financial disclosure forms regarding just these two projects is $26 million more than what they actually made. If these courses are representative of Trump’s overall finances—$23 million in “golf related revenue” is really a $3 million loss—his declared $296 million in total “golf related revenue” may well be highly overstated.

Trump campaign spokeswoman Hope Hicks did not respond to a request for comment.

The golfing revenue discrepancies call into question much of what Trump reported in his FEC financial disclosure form. On that filing, $415 million of the $694 million Trump touted at the debate was described as some kind of “revenue.” And the rest of that amount was money that also might not take into account the costs of his ventures, such as rent and land sales. Perhaps a large percentage of his reported revenue might have been profit, but the FEC form provides no way to determine that. Trump’s income could be dramatically less than what he claimed.

Trump’s assertions about his wealth and finances have been a crucial part of his sales pitch as a candidate—and have often been challenged in the past. The UK filings provide reason to suspect Trump was not telling the truth when he declared he made nearly $700 million last year. Voters will only be able to assess his honesty on this point if Trump’s tax returns become public.

Here are the two U.K documents: