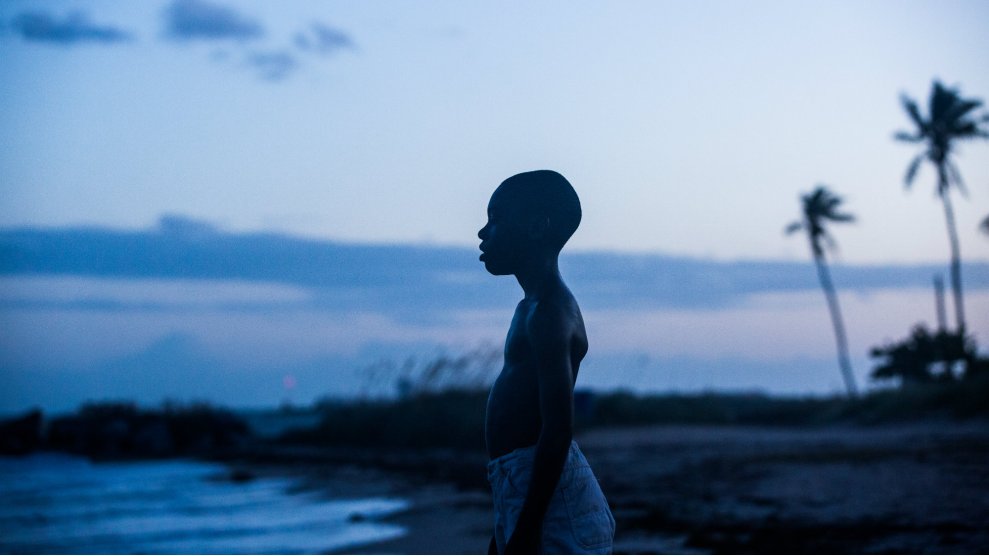 The forthcoming film Moonlight, out October 21, is at once particular in its perspective and universally relatable. Set in Miami in the late 1980s and ’90s, the film chronicles the coming-of-age of a gay black boy—Chiron (“shy-rone”)—as he struggles with his sexuality, peer pressure, and a drug-addicted single mother. Over the course of the film, he is taken under the wing of a sympathetic local drug kingpin (Mahershala Ali), and he finds, loses, and finally reconnects with his first love, Kevin. The action unfolds in three acts—each one a different stage in the life of Chiron, whose conflicted teenage persona is captured beautifully by Ashton Sanders. Overall, the film is a moving reflection on black masculinity and human vulnerability.

Moonlight—directed by the rising filmmaker Barry Jenkins—was a breakout hit at the Toronto International Film Festival in September and is already the subject of Oscar talk. But that should come as no surprise. It is based on In Moonlight Black Boys Look Blue, a play by Tarell Alvin McCraney, a former international resident at London’s Royal Shakespeare Company, a 2013 recipient of a MacArthur “genius grant” Fellowship, and winner of numerous other accolades for plays highlighting the diversity of the African American experience. I caught up with McCraney to talk about his own coming of age and why it’s so important to tell stories about queer black identity. Watch the trailer, and then we’ll talk.

Mother Jones: Let’s start by talking about your own childhood and how that informed the play and the movie. Do you relate to Chiron?

Tarell McCraney: Yes. The movie is set in the neighborhood where I grew up. My family still lives there. A lot of what we depicted in the movie is what I saw on a daily basis. The process of growing into your own person is a pretty universal thread. I don’t know if one can write characters you don’t relate to.

MJ: I came out as bisexual in February. Even though I knew I liked boys in middle school, I didn’t apply that term to myself until my junior year in college, two years ago. In part, that had to do with the fact that people would call me gay or feminine, and it was always a word they used to hit me with. I think it was because I had to reject that label growing up that it took me so long to see myself in that space, and begin to identify with the community. So I could also relate to Chiron.

TM: That’s pressing. The film is that story of whether or not you were even allowed space to figure out for yourself.

MJ: How old were you when you knew you were gay, and were you allowed that space at home?

TM: I always knew. And there was no need for me to come out—I was out! Whenever I was bullied, it was understood why. I never hid—it more so made me feel like there was something in me that was not wanted, which is different from hiding. I can’t hide it because everybody can see it. But no is the answer—which is why this work is necessary. 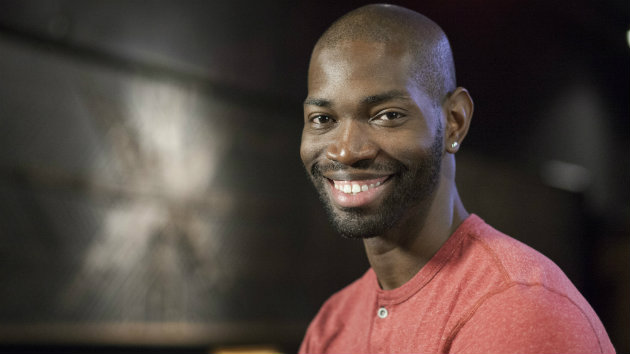 MJ: Would you say it’s harder to come out in the hood than in other places?

TM: It varies by person, the journey of coming out. It’s important for us to note that on all levels, in all parts of society, some people are able to be their full selves regardless. There were gay people in Liberty City when I was a kid. People we knew were gay, whom our parents talked to and talked about. There were people who cross-dressed. There were people who were transgender—I’m talking about the ’80s. That has always been a part of our community. Maybe people didn’t want to tell everybody that was a part of our community. But to say it’s harder to come out in the hood is not true. There’s bias everywhere.

MJ: Let’s talk about the movie. You’ve acted in and written a lot of plays. What was it like to see your work on the big screen?

“It was really exciting to see. It’s such a beautiful film. Those performances are earth-shatteringly good.”

TM: It was really exciting to see. It’s such a beautiful film. Those performances are earth-shatteringly good. I didn’t know you could find a young actor with that kind of power. The script was actually written in 2004, right before I went to grad school. I’ve always tried to have conversations about the difficulty in becoming one’s full self, and choosing one’s path, and what that means.

MJ: Are there any major plot points where the movie deviates from the play?

TM: There are no huge plot turns. But there are some, because it’s Barry’s movie just as much as it is mine.

MJ: In the first chapter, Chiron is looked out for by this drug dealer. In the hood, the hypermasculine gangster archetype seems like the antithesis of gayness. Rap music will tell you that. Why did this dealer feel compelled to take in this gay kid and make him feel comfortable with himself?

TM: What did you think?

MJ: I assumed he saw a vulnerability in Chiron that he recognized in himself—perhaps from a younger age.

TM: Yup. And he could see that past a perceived homosexuality, a trait they probably didn’t share. He could think back to when he was seven or eight and see himself. It’s important for all people to be able to recognize humanity.

MJ: In another scene, some boys make Kevin (Chiron’s love interest) beat him up in the schoolyard. Afterward, he cries when an administrator tells him that if he were a man he wouldn’t let the other kids pick on him. Why was that so triggering for him?

TM: Because the person he was closest to just punched him in the face and left him there.

MJ: My editor gave me the same answer and said it was obvious, but I didn’t read it that way. When Chiron keeps getting up even though Kevin is telling him to stay down, to me, Chiron is trying to show the boys he can take it like a man, but he’s also sticking it to Kevin—who cared for Chiron but opted to hit him anyway—by making Kevin do it even as Kevin tried to lessen the pain for both of them. He broke down because he felt like he’d failed at both tasks.

TM: So why did that trigger this in you?

MJ: Because my own femininity was ridiculed, and accepting my queerness meant embracing that I didn’t have to act in a conventionally masculine way.

“We create a binary and try to fit everybody into it. And that’s a kind of insanity for both sides.”

TM: That’s one of the things in society that we don’t do well. We create a binary and try to fit everybody into it. And that’s a kind of insanity for both sides. But look at that moment in the film and see how many variations on the theme there are. You’ve got the personal: The person Chiron most trusts is hurting him the most. You’ve got the political: If I’m a man, I stand up to these people. And there’s the larger unknowable: What actually constitutes me in this moment? All those avenues pour into this section. Which is why it’s important to not just make it into one thing. Chiron cried because it was complicated.

MJ: The last time we see Kevin and Chiron together is the morning after they’ve reconnected for the first time in years. The film leaves a lot hanging. Where would you like audience members to go with this?

TM: I can only guess at what Barry wanted us to do. And I enjoyed that that leaves open possibilities about what happens next. As a storyteller, I enjoy when I’m brought to a place where I can imagine the infinite. It allows me to keep these people with me. I’m always going to be trying to figure out what’s next for them.

MJ: There’s been very little representation of queer black kids on screen. We’ve had Pariah and Tangerine most recently, but not much else. What would you want those kids to take away from the movie?

TC: The more colors we can add to the conversation the better. But kids in general are going through this. This representation is solidly for queer black kids to be able to see themselves. But I think it’s important for people to see how they’re intertwined in all of our lives. I was describing the community I came up in. It would be harmful for me to pretend that there were no gay people around. They were there. And their lives are important to be told. The transgender sex worker two doors down—her life is important. And not having it in the collective memory is dangerous. Because if we don’t remember that that’s a part of who we are, then there’s going to be somebody thinking that there’s nobody else out there like them.