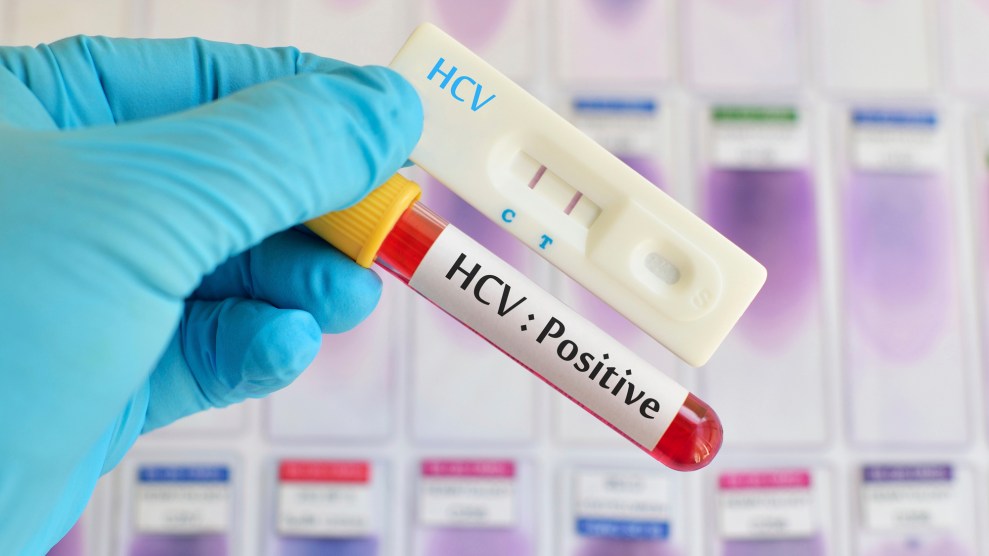 Less than 1 percent of inmates with hepatitis C are receiving treatment in state prisons, according to a new study by prison officials, doctors, and researchers. It’s largely because prisons can’t afford the drugs they need to fight the dangerous liver disease that spreads through blood and bodily fluids.

Hepatitis C kills more Americans than any other infectious disease, including HIV and tuberculosis; about 17 percent of the prison population in America is suffering from it, compared with 1 percent of the general population. New treatments have been developed but are extremely expensive, so over the last two years, inmates in Tennessee, Massachusetts, Minnesota, and Pennsylvania have sued for access to the drugs.

The study, published in Health Affairs, comes on the heels of those lawsuits. It was conducted by researchers at Yale University in collaboration with the Association of State Correctional Administrators, which includes the heads of corrections agencies in every state as well as the Federal Bureau of Prisons. Researchers collected data from 41 states about hepatitis C infections and treatment in prisons. They found that more than 106,000 inmates in state prisons had the disease as of January 2015, and of those, only about 950, or less than 0.9 percent were being treated.

“What we desperately need are less costly drugs and more funding.”

Prison officials who helped conduct the study have blamed the high cost of treatment. In 2013, new drugs were released that have proved very effective, curing the infection in 90 percent of cases in a few months. (Previous treatment options cured roughly half of cases, took much longer, and resulted in debilitating side effects.) But the cost of the new drugs can be prohibitive: A 12-week course of medication can range from $54,600 to $94,500, depending on the particular drug.

Some government agencies can get discounts. The federal prison system receives 24 percent off, while the Department of Veterans Affairs may have a discount of 50 percent, the researchers found. But state prisons aren’t so lucky. Many of them get a discount of less than 10 percent, and one state gets no discount at all. As a result, state prison officials say they must make tough choices about whom to treat.

Treating hepatitis C patients “requires resources and discounts we don’t have,” A.T. Wall, director of the Rhode Island Department of Corrections and a co-author of the study, said in a statement. “What we desperately need are less costly drugs and more funding.”

Corrections departments in 16 states reported spending at least 10 percent of their total budget for drugs on hepatitis C medication. But states could actually save money in the long run if they invest in treatment right away, the researchers noted. When left untreated, patients with hepatitis C may need a liver transplant, which can cost hundreds of thousands of dollars, and they can spread the infection to others. To get the drugs for less money, the researchers encouraged state prisons to partner with qualified health centers that can receive discounts through a federal program.

Thomas Castelli, an attorney for the American Civil Liberties Union who is representing inmates in Tennessee, said in a statement, “Incarcerating people under conditions that erode their health, safety and human dignity amounts to cruel and unusual punishment, which not only has devastating long-term effects for those individuals, but which undermines the purported purpose of a rehabilitative criminal justice system.” 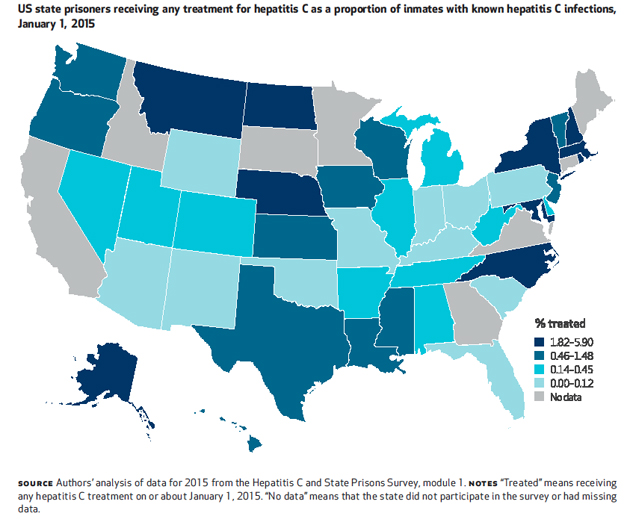