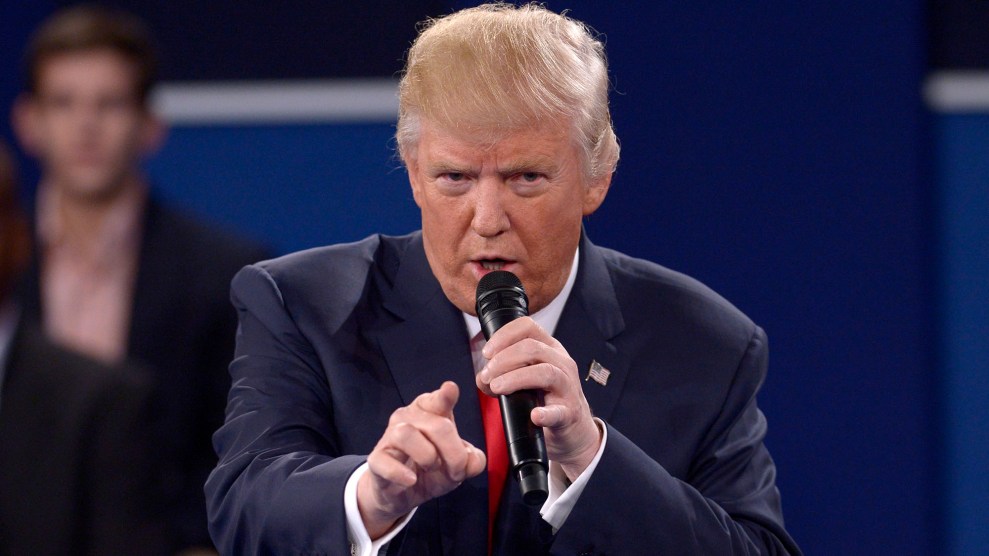 Sean Spicer, a top Republican National Committee official, on Sunday night refused to acknowledge that the conduct Donald Trump claimed to have engaged in during a 2005 Access Hollywood taping constitutes sexual assault. In that video, which has roiled the GOP since its release Friday afternoon by the Washington Post, Trump discussed forcibly kissing women and grabbing their genitals. “Grab them by the pussy,” Trump said. “You can do anything.” In the days since, the press has referred to what Trump described as sexual assault. Trump’s shocking comments caused women around the country to come forward with their own stories of being assaulted in this way on social media and in the press—describing it repeatedly as a violent form of sexual assault that still haunts them.

But Spicer, the RNC’s communications director, refused to acknowledge that grabbing someone’s genitals is sexual assault when asked about this by the Weekly Standard after Sunday’s debate. “I don’t know,” he said. “I’m not a lawyer.”

The answer sounds a lot like Republican Sen. Marco Rubio when he once dodged a question about how old the planet is by saying, “I’m not a scientist, man.” Except Spicer is talking about sexual assault—and trying to minimize the definition and experiences of the people subjected to it. Perhaps Politico reporter Edward-Isaac Dovere said it best:

Spicer isn’t the only Trump supporter trying to claim that what Trump described is not sexual assault. Sen. Jeff Sessions (R-Ala.) also denied that groping someone’s genitals is sexual assault. Here is Sessions’ exchange with the Weekly Standard:

SESSIONS: This was very improper language, and he’s acknowledged that.

TWS: But beyond the language, would you characterize the behavior described in that

as sexual assault if that behavior actually took place?

SESSIONS: I don’t characterize that as sexual assault. I think that’s a stretch. I don’t know what he meant—

TWS: So if you grab a woman by the genitals, that’s not sexual assault?

SESSIONS: I don’t know. It’s not clear that he—how that would occur.

Unlike Spicer, Sessions is a lawyer—one whose nomination to a federal judgeship three decades ago capsized after critics accused him of racism.