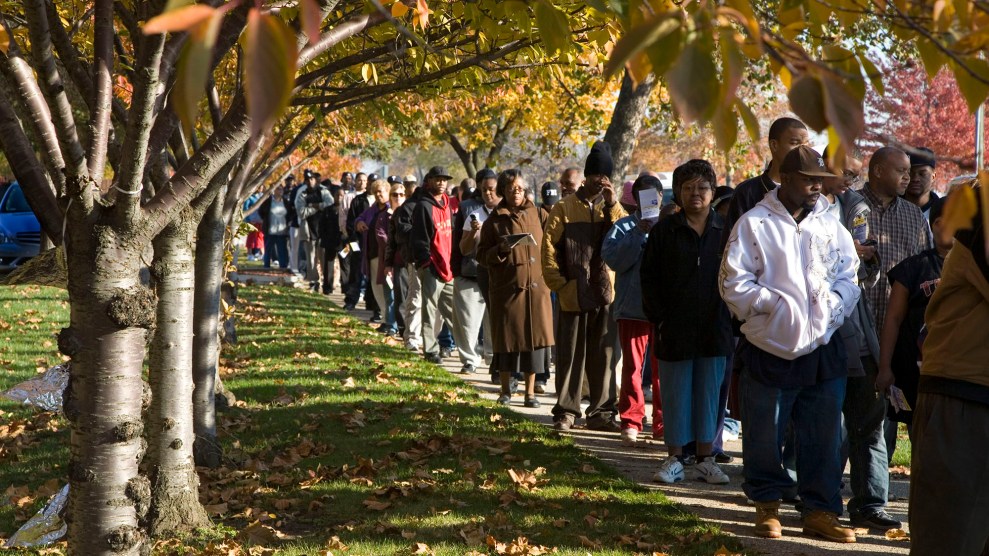 Trump then described how the media has “poisoned the mind of the voters,” how “millions of people…are registered to vote that shouldn’t be registered to vote,” and how Hillary Clinton is “guilty of a very serious crime” and therefore shouldn’t be able to run. Her candidacy, he insisted, is evidence that the overall system is “rigged.” Wallace pressed the point, asking whether Trump would adhere to a peaceful transition of power.

Without hesitation, Trump shot back: “What I’m saying is that I will tell you at the time, I’ll keep you in suspense.”

Trump’s reluctance to commit to a peaceful transition of power created a firestorm of criticism from both Democrats and Republicans. But his assertions are the natural conclusion of much of his standard campaign rhetoric, with ongoing claims that the election is “rigged” against him by groups including the media, the federal government, and a “global power structure,” and coded language about voter fraud in the inner cities. He urged his supporters to “watch” the polls in cities such as Chicago, St. Louis, and Philadelphia. “I hear these horror shows, and we have to make sure that this election is not stolen from us and is not taken away from us,” he told a mostly white crowd in northeast Pennsylvania earlier this month. “And everybody knows what I’m talking about.”

His inflammatory rhetoric has raised concerns that Trump supporters might attempt to intimidate voters on Election Day and adds to growing misgivings about the integrity and security of polling places. “Threats of voter intimidation, the most racially bigoted election in generations, and the specter of voting discrimination in the first-post Shelby presidential election have created a perfect storm for disenfranchisement,” said Wade Henderson, the president and CEO of the Leadership Conference on Civil and Human Rights and the Leadership Conference Education Fund, during a call with reporters on Wednesday. In response, his organization, along with a host of others, is planning to deploy thousands of volunteers across the country, particularly in minority areas, to ensure eligible voters know their rights and have resources to fall back on if they’re challenged at the polls by voters or elections workers.

“Threats of voter intimidation, the most racially bigoted election in generations, and the specter of voting discrimination…have created a perfect storm for disenfranchisement.”

But how are they preparing? And what are they likely to be up against?

New voting laws will be in place in 14 states for the first time in a presidential election, which is likely to cause confusion among some of the thousands of mostly volunteer poll workers across the country. There will also be fewer Department of Justice observers sent to monitor elections in key states to make sure all procedures are followed.

In 1982, the Democratic National Committee sued the Republican National Committee after the RNC recruited volunteers to harass and intimidate voters in predominantly African American and Hispanic precincts in New Jersey. A subsequent consent decree that’s still in effect prohibited the RNC from recruiting volunteers to challenge minority voters’ eligibility at the polls and engaging in other activities that could be considered harassment. The RNC has notified its members that they should not challenge voters at the polls, but some are concerned about problems given the climate of this election. The DNC accused Republicans of violating that court order by allegedly helping the Trump campaign with “ballot security” measures and the recruitment of poll watchers, and it filed a lawsuit Wednesday in federal court asking for sanctions on the GOP and an eight-year extension of the court order, which was set to expire on December 1, 2017.

Kristen Clarke, president and executive director of the Lawyer’s Committee for Civil Rights Under Law, said Wednesday that her group is in its 14th year of coordinating a nonpartisan voter protection program and is recruiting 4,500 volunteers who will be working in 29 states. Those volunteers will be trained to help voters with questions and complaints related to early voting, absentee ballots, and more. There are similar support efforts in other states and minority communities, spearheaded by groups such as the NAACP National Voter Fund, the National Association of Latino Elected and Appointed Officials Education Fund, the American-Arab Anti-Discrimination Committee, and the Arab American Institute. The work of all these different groups highlights a basic problem: There is no coordinated effort across the country to monitor the polls and assist voters.

On Monday, Henderson’s group—along with 87 other civil and voting rights groups—sent a letter to each state’s secretary of state urging the development of “a plan to ensure that no one in your state is disenfranchised in the upcoming election.”

Tammy Patrick was the former federal compliance officer in the Maricopa County Elections Department in Arizona, which made her responsible for ensuring that the state’s biggest county followed all applicable federal laws when it came to running elections. She said election officials always try to be prepared for a number of possibilities on Election Day, including aggressive voters who have, on occasion, gotten into fistfights with each other or election workers. But, she says, Trump has complicated things.

“What is different this year is that a candidate for president of the United States has called the integrity of our democratic process in question before ballots had even been cast in the election,” said Patrick, now a fellow at the Bipartisan Policy Center in Washington, DC. “Others have done this, candidates for lower office, but never a national candidate—to my knowledge.”

“What is different this year is that a candidate for president of the United States has called the integrity of our democratic process in question before ballots had even been cast in the election.”

Even some seasoned poll watchers are getting nervous in the middle of all the talk about violence at the polls. Catherine Engelbrecht is the head of True the Vote, an “election integrity” organization that works with people from all political backgrounds to volunteer for their local elections, scour voter rolls for names of deceased or otherwise ineligible voters, learn local election regulations, and get appointed as poll watchers in their communities. The group emerged from the Texas Tea Party movement in 2009 and has been accused of training poll watchers that end up targeting minority voting areas, an accusation the group denies. This year Engelbrecht estimates they’ve trained thousands of volunteers. In an interview with Mother Jones, Engelbrecht said Trump’s claims of a rigged or stolen election are part of the general troubling conversation about election integrity.

“It just leaves me numb,” she said about the talk of violence or confrontations at the polls. “What we are seeing now is a gross manipulation of political power. It’s dangerous on both sides of the ticket.” She says Trump is, “God forbid, willing things into reality, putting ideas in people’s heads that need not be there.” But Clinton’s repeated references to Russian sabotage of the electoral process and Democrats’ talk of a federal takeover of elections has also stirred people up.

Is there an increased danger of gun violence at polling places this year? Election officials in several open-carry states have attempted to prepare for the possibility, the Washington Post reported. In Virginia, a local election board considered seeking a one-day ban on weapons at polling places on private property such as schools. In New Hampshire, where firearms at the polls are legal, officials have had to explain to some worried voters why other voters at the polls might be armed. In Pennsylvania, election officials are reminding voters of the do’s and don’ts of voter intimidation, including not waving a gun at another person.

In Denver, Amber McReynolds, the director of elections for the city and county, said she trains her poll workers on what to do in the event of an active shooter as part of an overall approach to safety. “It’s really just another way we’re trying to make sure our personnel in the field are ready in the event of an emergency situation,” McReynolds said, adding that the training was instituted more than a year ago and not in response to any recent safety concerns.

Concerns about guns and polling place intimidation aren’t new: In 2006, anti-immigration activists with the Minutemen militia staked out a polling place in Tucson, Arizona, questioning Hispanic voters to see if they spoke English, according to the New York Times. Even though there was intimidation, there were no reports of violence. Arizona Secretary of State Michele Reagan said her office has not heard of any threats to polling places during this cycle, and that law enforcement will be ready to respond to any reports of violence.

Cook County Clerk David Orr supervises elections for roughly 3 million registered voters throughout Chicago. He says concerns about Election Day violence are slightly exaggerated. “It’s not particularly warranted,” he told Mother Jones. “I don’t think this would be happening if it wasn’t for Mr. Trump’s comments about a rigged election.” He said there is “nothing wrong” with candidates who urge their supporters “to be enthusiastic,” but “this has come to a different level, which I do think has some dangerous tones.”

Trump singled out St. Louis as one of the places where his supporters should watch the polls. Erv Switzer, the board chairman for the St. Louis Board of Election Commissioners, says election officials have been in touch with the St. Louis Metropolitan Police Department and are relying on them to provide “the appropriate level of security” for polling places, just as they have for previous presidential elections. Switzer says Trump supporters are welcome to visit polling places, just as long as they follow the normal poll-watching procedures in which political parties, not candidates, appoint designated poll watchers.

“We’re focusing on having a properly run and fair election,” Switzer says. “The allegations of rigged elections taking place just is something that is not realistic in our jurisdiction, and I suspect throughout the state of Missouri.”