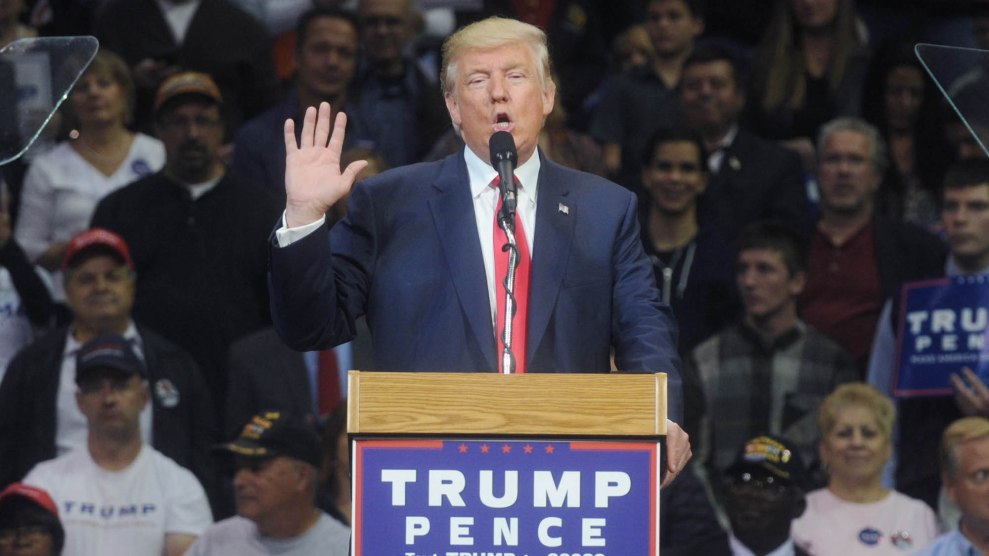 Crash-and-burn politics truly make for strange bedfellows. On Tuesday afternoon, as Donald Trump’s campaign was in full civil war with the GOP establishment—which had begun to abandon him after the emergence of a 2005 video showing him bragging about committing sexual assault—the Trump campaign sent out a press release highlighting a column that praised Trump and his turn to nothing-but-scorched-earth tactics. The column hailed the besieged GOP nominee for aiming his fire at Republican elites: “If he is going down to defeat, he will go out as Trump, not some sniveling penitent begging forgiveness from hypocrites who fear and loathe him.” But it also defiantly declared, “The Donald Lives.”

The point of the press release was to show recipients that Trump was still in the fight and receiving support. But there was a twist the campaign did not acknowledge: Trump once fiercely attacked the author of the column, conservative pundit and onetime GOP presidential candidate Pat Buchanan, as a bigot and a “fan” of Hitler.

In 1999, Trump was pondering a run for president as a Reform Party candidate. So was Buchanan, who had mounted a feisty but unsuccessful populist (from the right) campaign in 1996 for the GOP nomination. That year, Buchanan published a book on World War II that contended that Hitler had not posed a direct threat to the West and that the war had not been necessary. Trump leaped to criticize his potential rival. At a visit to a museum run by the Simon Wiesenthal Center, an organization that promotes human rights and studies the Holocaust, he denounced Buchanan, saying, “We must recognize bigotry and prejudice and defeat it wherever it appears.” He noted, “I think Pat Buchanan should come here, absolutely. His views are so far off, and what he wrote in his book was so bad.”

In early 2000, while still considering a White House bid, Trump published a book called The America We Deserve, and in the work he lit into Buchanan:

His startling view that the Western allies should not have stopped Hitler is repugnant. When he said that, he totally lost it…To say that Hitler had no “malignant intentions” toward the United States is beyond belief. (Twenty years ago, Buchanan was less cautious. He called Hitler “an individual of great courage, a soldier’s soldier…a leader steeped in the history of Europe,” and talked about his extraordinary gifts.)…Buchanan denigrates the memory of those Americans who, in the Second World War, gave their lives in the effort to stop Hitler.

In another passage, Trump asserted that Buchanan had praised Hitler and called Buchanan “a fan” of the Nazi leader. He added:

[Buchanan] has a long history of defending Nazi war criminals and actually argued that the death camps at Treblinka couldn’t have executed anyone because the poison gas used was not toxic enough to kill. Buchanan’s theory seems to be that Jews took over American foreign policy after the war and lied to us about everything, that Jewish global interests were paramount in American governmental thinking, and they even outweighed United States security interests.

Trump pointed out that conservative icon William F. Buckley had concluded that it was “impossible to defend Pat Buchanan against the charge that what he did and said…amounted to anti-Semitism.”

Trump expanded his critique of Buchanan beyond Hitler, Jews, and World War II. He wrote, “I always enjoyed watching Pat Buchanan on TV…I knew his political position was far to the right, but until he published his public embrace of Adolph Hitler, I didn’t realize how dangerous his view are on a broad range of subjects.” He observed that Buchanan “has been guilty of many egregious examples of intolerance. He has systematically bashed Blacks, Mexicans, and Gays. In 1983, saying that homosexuals had ‘declared war on nature,’ he said that AIDS is nature’s awful retribution.” Trump  assailed Buchanan for once saying that women did not possess the “single-minded ambition and the will to succeed in the fiercely competitive world of Western capitalism.” He criticized Buchanan for supporting apartheid in South Africa.

Some of Trump’s criticisms now seem similar to the charges he has faced during the current presidential campaign. And he didn’t hold back when decrying Buchanan, declaring that “Buchanan is close to the lunatic fringe” and that his “extremist views have to be challenged by someone.” Trump added, “Simply put, Pat Buchanan has written too many inflammatory, outrageous, and controversial things to ever be elected president.”

This was a mighty attack: Buchanan, according to Trump, was a Hitler-loving, anti-Semitic, homophobic, misogynistic, racist right-wing extremist.

That was then—and Buchanan hasn’t held a grudge. In the past year, he has been a passionate cheerleader for Trump, insisting (proudly) that Trump stole his playbook and proclaiming him the future of the GOP. And now the Trump campaign is citing Buchanan as a Trump supporter and defender. The Hitler “fan” and bigot of 16 years ago has become a Trump fan—and that’s all Trump’s crew needs to know to embrace him.