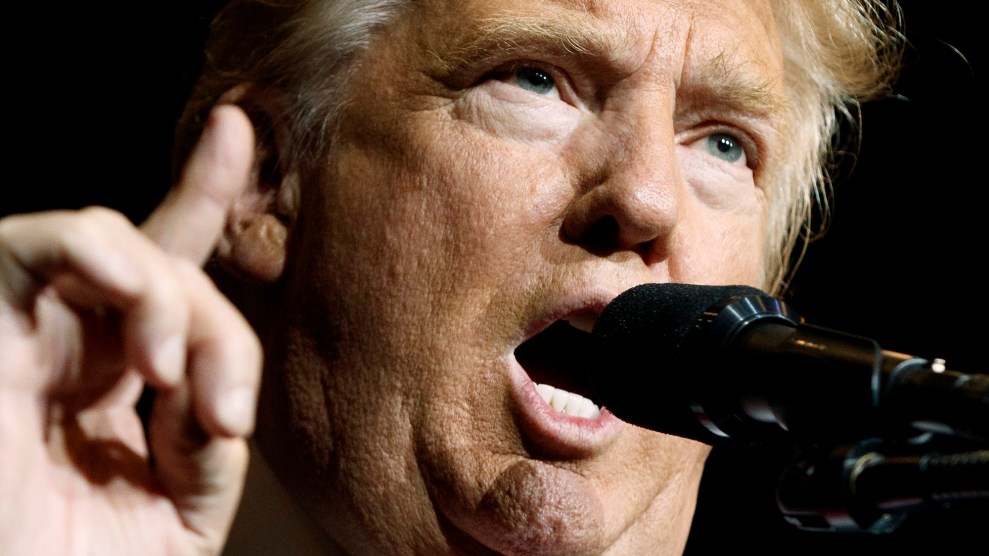 During a rally in North Carolina on Friday, Donald Trump fiercely attacked the women who have accused him of sexual assault over the past few days, making crude comments about one woman’s looks and seeming to issue a similar insult about Hillary Clinton.

“Believe me, she would not be my first choice, that I can tell you,” Trump said of Jessica Leeds, the woman who told the New York Times on Wednesday that Trump had groped her aboard an airplane more than three decades ago. The remark earned whoops from members of the crowd, who also chanted “lock her up“—a rallying cry usually reserved for Clinton—in reference to the women who have accused Trump of assaulting them.

Trump also appeared to make a similar crack about Clinton’s looks. While mocking the suggestion that he loomed over Clinton while she was speaking at Sunday’s debate, Trump seemed to disparage Clinton as much as he had Leeds. “When she walked in front of me, I wasn’t impressed,” he said.

Leeds is one of several women who have come forward this week with allegations that Trump forcibly kissed or groped them. The women have said they were spurred to go public by Trump’s claim at Sunday’s debate that he had never forced himself on women. Trump, who started his speech on Friday in a calm monotone, grew loud and animated as he called the women liars and tools of the Clinton campaign.

“The stories are total fiction,” he said. “They’re 100 percent made up. They never happened.” At one point he mockingly reenacted the story of Kristin Anderson, a woman who told the Washington Post earlier on Friday that Trump had reached his hand up her skirt and touched her vagina while they were sitting next to each other at a New York club in the early 1990s. Trump first said the story wasn’t credible because he would never be sitting alone at a club, and then mimicked putting his hand up a woman’s skirt. “And then I went wah to somebody,” he said as he made the gesture and the crowd laughed.

Trump accused the media of focusing on the stories to draw attention away from the Clinton campaign and internal emails published this week by WikiLeaks. “The corrupt media is trying to do everything in their power to stop our movement,” he said. He also linked those claims to wider conspiracy theories he pushed at a rally on Thursday. “This process is rigged,” he said on Friday. “This whole election is being rigged.”

During Thursday’s address in Florida, Trump delivered his most extreme and conspiracy-laden speech of the campaign. He attacked his accusers, claimed that journalists were colluding with the Clinton campaign, and said that Clinton was part of a global anti-American cabal, all themes he repeated on Friday. “Behind closed doors, speaking to international bankers, Hillary Clinton has pledged to destroy the sovereignty of the United States,” Trump said, citing emails recently published by WikiLeaks as evidence. On Friday, he added Carlos Slim, a Mexican billionaire who is the New York Times‘ largest shareholder, to his list of conspirators. Journalists, Trump said, are “not journalists. They’re corporate lobbyists for Carlos Slim and for Hillary Clinton.”

Many onlookers heard anti-Semitic dog-whistles in Trump’s conspiracy rhetoric, particularly his comments about “international bankers” and their globalist agenda. “Whether intentionally or not, Donald Trump is evoking classic anti-Semitic themes that have historically been used against Jews and still reverberate today,” Jonathan Greenblatt, the chief executive of the Anti-Defamation League, told the New York Times on Thursday.