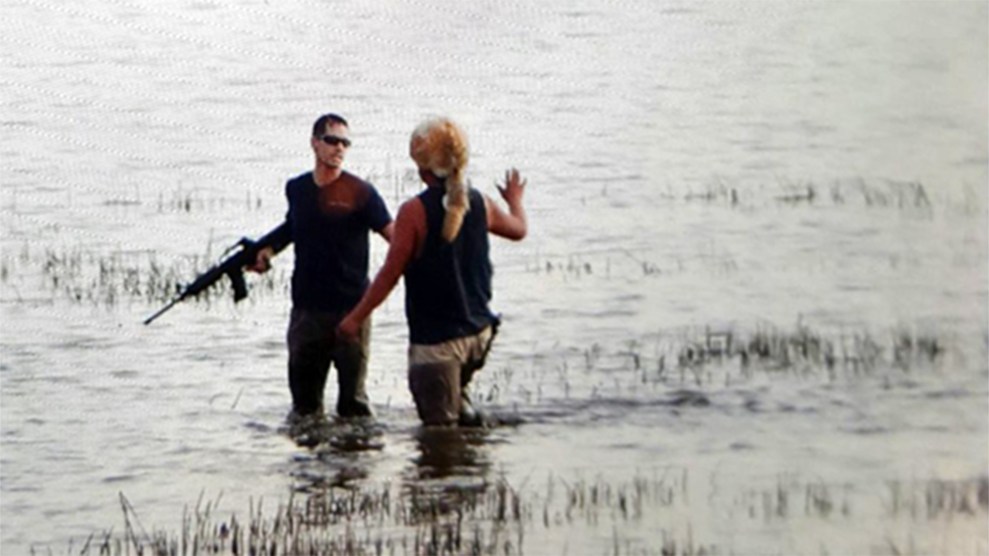 A woman talks with an armed man who fled after entering anti-pipeline protesters' camp near the Standing Rock Indian Reservation. Ryan Vizziones

An armed security agent employed by the company behind the controversial Dakota Access Pipeline was arrested Thursday after he was caught entering the camp of activists protesting near the Standing Rock Indian Reservation in southern North Dakota. After a car chase and a standoff during which he allegedly pointed his assault rifle at a local Sioux teenager, the man, whose ID indicated he was an employee of Dakota Access LLC, was arrested and handed over to the FBI.

A little after 5 p.m., protesters spotted a man driving down Highway 1806 in a white Chevy Silverado with what appeared to be an assault rifle in the cab, according to multiple eyewitnesses. The road is the main site of a conflict between local tribes, who want to halt construction of the Dakota Access Pipeline, and police, who had deployed two armored vehicles, tear gas, tasers, and shotguns firing plastic pellets to remove 300 protesters from the land earlier in the day.

Tribal members and their supporters jumped into two cars and chased the Chevy Silverado in the direction of a small reservoir and crossing called Backwater Bridge. The two cars forced the Silverado off the road, according to Dallas Goldtooth, an organizer for the Indigenous Environmental Network. The driver then got out of his car, brandishing an AR-15-style rifle and a 9mm pistol, says another witness, Jennifer Owyhee. He allegedly pointed the rifle at the head of one of his pursuers, according to witnesses. “You can’t kill all of us,” one participant told the man. “You’re just going to make things worse.”

It appears from the man’s ID badge and documents found in the truck that he is a Dakota Access Pipeline security employee.

The man then fled into shallow water. Protesters and tribal members tried to get him to drop his weapon. After a half hour of negotiations and arguments, the man refused to leave the water, according to witnesses including Ryan Vizziones, a photographer and activist. I watched as several people waded into the pool after the armed man. The photo above, shot by Vizziones, shows the man as he refuses to hand over his assault rifle.

According to the Morton County Sheriff’s Department, an unknown person “was shot in the hand” during the altercation and an investigation is underway. It’s not clear if the man fleeing through the water, or one of his pursuers, were shot, or if additional events may have led to the initial car chase.

After about 30 minutes, around 6 p.m., more than a dozen Bureau of Indian Affairs police cars entered the protest encampment. They disarmed the man without incident and took him into custody.

As the man was being taken to the Standing Rock Sioux Tribal Police Department in Fort Yates, an unnamed person drove the Chevy Silverado a half mile up Highway 1806, close to where confrontations between protestors and police were still occurring. A swarm of several dozen protestors rifled through the dashboard. They found an ID badge bearing the armed man’s photograph. Avery White, a freelance photographer, took a photo of the ID after it was retrieved from the Silverado. “DAPL Security” is printed on the badge. “DAPL” stands for Dakota Access Pipeline. The protestors rifling through the car also found an insurance certificate whose holder is listed as Dakota Access LLC, based in Houston, Texas.

A log sheet for the truck shows that a man had checked the vehicle out at 8:30 that morning and had not returned it. Though the name of the man arrested by police has not been released yet, it appears from the ID badge and documents found in the truck that he is a Dakota Access Pipeline security employee.

After the documents were taken, protestors set the Chevy Silverado on fire. 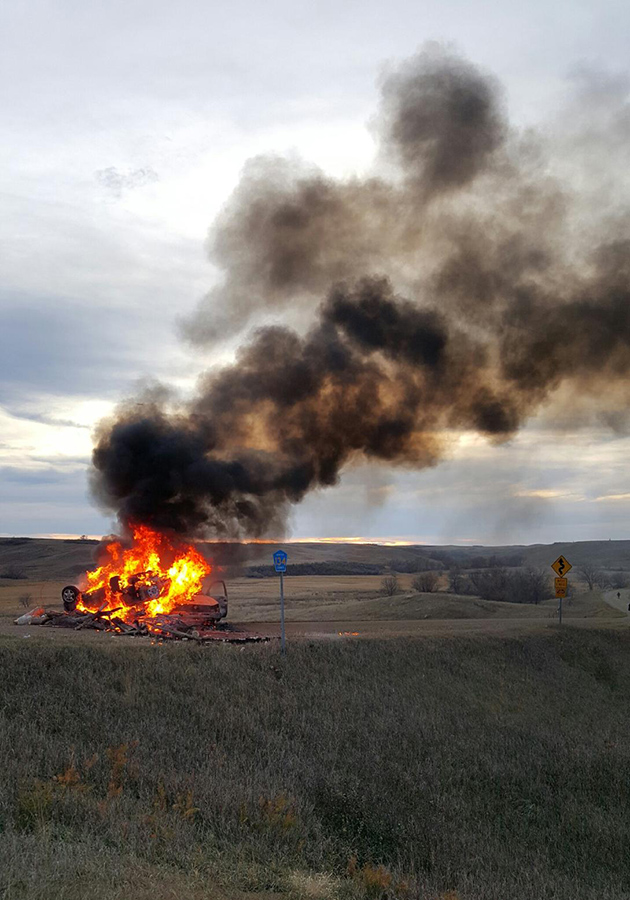 The truck burns near the site of confrontations between protesters and police. Wes Enzinna

According to an officer at the Standing Rock Sioux Tribal Police Department who confirmed the man’s arrest, he was picked up from Fort Yates by the FBI around 8 p.m. and taken to Bismarck, North Dakota, where he is currently being held. We are awaiting comment or more information from the FBI.